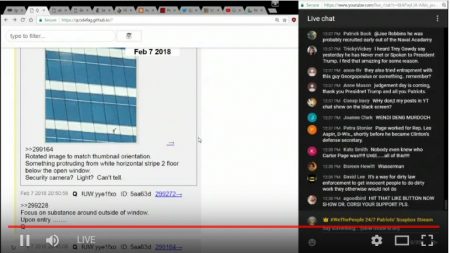 (Feb. 8, 2018) — In a continuous YouTube broadcast dated February 7, 2018, Infowars Washington, DC Infowars Bureau Chief Dr. Jerome Corsi devoted a segment of his discussion on the “#WeThePeople PATRIOTS’ SOAPBOX” to Dr. Carter Page, a former informal Trump-campaign adviser whose communications were surveilled after the FBI received a number of warrants from the Foreign Intelligence Surveillance Court (FISC).

The specific topic of Page arose at approximately 12:27 p.m. in the broadcast on Thursday.  The link to listen is here:  https://www.youtube.com/channel/UCWW3gYCvKS412p7o6qSK5gg/live

At 12:33, Corsi posited, based on a blog post at The Conservative Treehouse by “Sundance,” that Page was actually “a plant” placed into the Trump campaign by the FBI.

Page has not been charged with a crime and has filed two lawsuits naming The Huffington Post and Yahoo! News, respectively, for defamation in connection with articles they published alleging that Page conducted improper meetings with Kremlin officials.

Special Counsel Robert S. Mueller, III, a former FBI director, has been investigating the allegations that Trump and/or his campaign aides “colluded” with Russian-government operatives.

Last Friday, a four-page memo released by the House Permanent Subcommittee on Intelligence (HPSCI) was made public, with the explosive allegations that high-ranking officials of the DOJ and FBI knowingly provided incomplete and deceptive warrant applications to the FISC in order to obtain surveillance over Page’s communications.

Page is a graduate of the U.S. Naval Academy, holds several advanced degrees, and has had recent business dealings in Russia.  On Tuesday night, he was Laura Ingraham’s guest on the Fox News Channel in an arguably tight-lipped interview in which he claimed he “became a liability” to the Trump campaign.

Just before 1:00 p.m., Corsi suggested that text messages released between FBI employees Peter Strzok and Lisa Page mentioning an “insurance policy” in the event Trump were elected was the “Russia collusion” narrative which gave rise to the Special Counsel’s ongoing investigation.

At 1:07 p.m. EST, Corsi left the broadcast but said he would return at 2:00 p.m. to discuss “Uranium One,” an agreement solidified in 2010 between the U.S. and a Russian-owned uranium-processing company to which 20% of U.S. uranium stocks were sold.  A number of news reports by Fox News contributor Sara Carter and The Hill‘s John Solomon claim that corruption associated with the agreement was ignored by the Obama regime at the same time that then-Secretary of State Hillary Clinton promoted a “Russian reset” and the Clinton Foundation profited by several million dollars from Russia for several successive years.