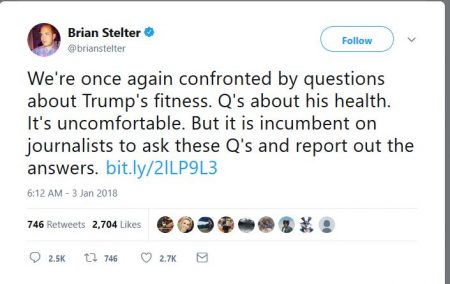 (Jan. 6, 2018) — On January 3, CNN’s Brian Stelter appeared to respond in a tweet to a Politico report issued the same day stating that a Yale University professor of psychiatry predicted that Trump will “unravel” and that he is “falling apart under stress.”

Stelter opined that while “Q’s (questions) about his health” are “uncomfortable,” “it is incumbent on journalists to ask these Q’s and report out the answers,” including a link to an online newsletter containing content from Stelter’s show, “Reliable Sources.”

The newsletter presents opinions from such “journalists” as CNN’s Jake Tapper and a considerable number of left-leaning commentators.

The professor, Dr. Bandy X. Lee, served as editor of a book titled, “The Dangerous Case of Donald Trump” published last year.  Lee reportedly met with “more than a dozen” members of Congress, all Democrats except for one Republican senator, according to Politico.

As part of her observations, Lee additionally claimed that “Trump’s mental health might lead to the extinction of the human species” in a reference to Trump’s having tweeted about North Korean dictator Kim Jong-Un, “Will someone from his depleted and food starved regime please inform him that I too have a Nuclear Button, but it is a much bigger & more powerful one than his, and my Button works!”

On Friday, in a follow-on to Politico’s story, CNN reported that “Lee’s public comments are highly unusual given protocols from medical professional organizations — including the 37,000-member American Psychiatric Association — banning psychiatrists from diagnosing patients without a formal examination.”

In response to Stelter’s commentary, The Post & Email tweeted:

Our tweet referenced the 5+-year investigation carried out by former detective Mike Zullo under the auspices of the Maricopa County, AZ Sheriff’s Office (MCSO) which concluded early on that the “long-form” birth certificate image posted on the White House website bearing the name “Barack Hussein Obama II” is a “computer-generated forgery.”

The media, as if in lockstep, refused to take Zullo’s reports seriously, including after he gave a final press conference in December 2016 in which he revealed that two forensic analysts approaching their examination of the image from different disciplines agreed that it cannot have emanated from a real, paper document.

Both political commentators and “journalists” have attempted to marginalize anyone who has questioned Obama’s birthplace, which is considered key to whether or not he is a “natural born Citizen,” as the Constitution requires of the president and commander-in-chief.

The fact that Obama claims a father who was never a U.S. citizen has been considered by many legal scholars to be disqualifying in and of itself.

Ironically, Trump was the first public figure to demand that the Obama White House release his “long-form” birth certificate in response to credible news reports that Obama was born in Kenya, for which Trump was rewarded by the media with the moniker, “leader of the birthers.”

In recent weeks, Zullo has been releasing more information gleaned from the investigation which has clearly made Obama sycophants “uncomfortable.”