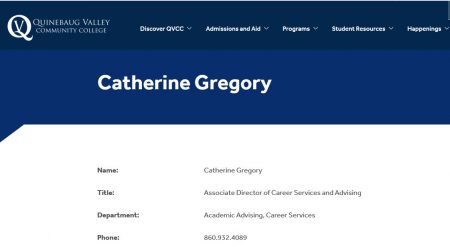 (Dec. 1, 2017) — An employee of Quinebaug Valley Community College (QVCC) who attended the Tuesday night speech at the University of Connecticut (UConn) given by Gateway Pundit White House correspondent Lucian Wintrich has retained counsel after cameras showed her taking something from the lectern.

Catherine Gregory is Associate Director of Career Services and Advising at the two-year college located in Killingly, approximately 20 minutes from UConn, which is located in Mansfield.

After seeing Gregory remove what may have been his speech notes from their place on the lectern, Wintrich ran after her and physically accosted her, causing her to fall.

Wintrich was removed from the room by UConn police and held until early Wednesday morning, according to reports, when he posted a $1,000 bond.

At approximately 10:45 on Tuesday evening, this writer was told by UConn spokeswoman Stephanie Reitz that Gregory was being questioned at the same time as Wintrich.  However, Gregory was not arrested.

On his Twitter feed on Thursday, Wintrich strongly suggested that he will file a lawsuit against the UConn, Connecticut’s flagship institution of higher learning, for failing to protect him as he gave his scheduled address sponsored by the UConn College Republicans.

QVCC President Dr. Carlee Drummer released a statement on Thursday indicating, without using her name, that awareness that Gregory had attended Wintrich’s speech, although “as a private citizen.”

In response, Wintrich tweeted that Gregory “SHOULD NOT be in a position to advise students…she committed a crime when she stole my speech and has a history of being a radical leftist…”

Wintrich tweeted on Friday that a “Mark Loomis” served on the security detail during his speech after making disparaging remarks about him and his own willingness to fulfill that function.

Two hours later, Wintrich quoted from a Facebook page post belonging to Loomis in which Loomis praised speeches he said he attended given by Louis Farrakhan, Barack Obama, and  “anti-racism activist” Jane Elliott.

Wintrich then tweeted the link to the entire post in which Loomis described Wintrich as “pathetic,” a “moron,” and possessive of “abhorrent beliefs.”

Loomis shared his views on Wintrich’s speech in the comments following an article published by WFSB-3 in Hartford.

This writer responded to one of them:

Another of Loomis’s remarks reads:

WFSB stated that a second arrest in connection with the speech was made regarding a broken window in the lecture hall.

Gregory has retained an attorney, Jon Schoenhorn of Hartford, who is quoted as having said:

It is my position as Ms. Gregory’s attorney that there is no cause to believe that what Miss Gregory did constituted a “larceny” or theft because she by picking up a piece of paper off a desk. The fact that the Republican club sponsored an event with a racist and bigoted speaker reflects poorly on the Republicans and UConn for permitting it. This is not a question of free speech. The racist and bigoted remarks that were made by Mr. Wintrich and his display of an image of Adolph Hitler were intended to cause and provoke a hostile reaction.

Mr. Wintrich was right at that moment, using hate speech, racist, bigoted remarks with the intent to provoke the audience.

On Wednesday evening, The Post & Email attempted to reach Gregory via her QVCC email address, to ask if she were the person who removed the papers from the lectern but received no response.

Update, Dec. 3, 2017:  Contradicting mainstream media reports, Wintrich said in a Periscope session on Saturday night that “there was no $1,000 bail.”  He also said that Gregory removed his entire speech, not one page, as Loomis claimed.