OR DID IT EVER GET OFF THE GROUND? 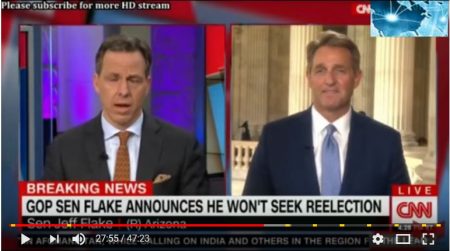 Twitchy reported that Tapper apparently saw Palin’s tweet and responded, referring to an earlier tweet of Palin’s which said, “Breaking News everyone… Hold onto your hats!” and contains link to a post at a blog named “viral.americannewshub.com” titled, “JUST IN: Trump Broke Him! Top GOP Senator Announces He Will Not Run for Re-Election.”

The post is attributed to Andrew Mark Miller, not Palin.

Along with Brian Stelter, Tapper is promoting CNN’s apparent rebranding initiative under the hashtag “#FactsFirst.”  “Facts are not interpretations,” Stelter’s written announcement reads.

The YouTube video of Tuesday’s edition of Tapper’s show, “The Lead,” depicts the White House press briefing followed by video of Flake’s earlier announcement on the Senate floor that he will not seek re-election next fall.  “I will not be complicit,” he said in declaring his plans.

Tapper then interviewed Flake, who said that he objects to President Donald J. Trump’s style and “behavior” and felt compelled to end his congressional career accordingly.  He also told Tapper that it is “difficult” to “win a primary election” if one is not a Trump supporter.

When asked by two reporters Tuesday about the significance of Flake’s and Sen. Robert Corker’s disagreements with Trump, White House Press Secretary Sarah Huckabee Sanders responded that the impending departure in January 2019 of both men “is probably a good move.”

Flake, Corker, the Republican Party, and other political headlines dominated Twitter on Tuesday evening, overshadowing the announcement by House Intelligence Committee Chairman Devin Nunes that the group is launching an investigation into the sale of U.S. uranium to Russia in 2010 while Obama occupied the Oval Office and Hillary Clinton was Secretary of State. 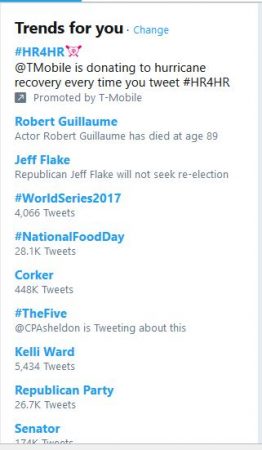 At 29:17 in the interview, Tapper introduced Palin into the conversation.  “Sarah Palin and Breitbart are saying things along the line right now that ‘Trump broke you.’  What’s your response to that?” to which Flake responded with a laugh, “I’m still standing.”

Flake will be a guest on Wednesday’s “Morning Joe,” a production of MSNBC/NBC News, and he was widely lauded by left-leaning media under the hashtag “#Jeff Flake” following his Senate-floor declaration.

During the interview, Tapper opined, despite his earlier pledge to adhere to “facts,” that Trump’s behavior is “aberrant.”

Tapper did not respond to The Post & Email’s tweet about CNN’s misleading caption to a 2015 interview with former Maricopa County Sheriff Joseph Arpaio regarding the Obama birth certificate investigation.