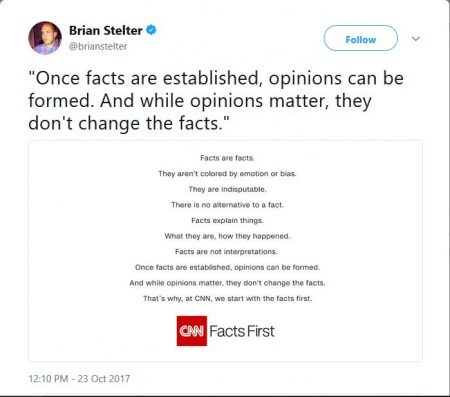 (Oct. 23, 2017) — On Monday evening, CNN “Reliable Sources” host Brian Stelter tweeted what he said is the importance of “facts” in reporting the news.

Stelter is historically correct in that journalism once consisted of factual representations from the reporter to the public without a political or agenda-driven slant.

Founded in 1980 as the original 24-hour “cable news network,” CNN has for months, and perhaps years, been deplored by many as a purveyor of “fake news” as a result of its left-leaning bias and focus on trivia.

Donald Trump has been particularly critical of CNN, calling out in a tweet on Saturday CBS, NBC and ABC News for the same reason.

In a statement formatted like a poem, Stelter wrote, “Facts are facts.  They aren’t colored by emotion or bias.  They are indisputable…”

However, for years, CNN has denied the findings of a criminal investigation which found unequivocally that the “long-form” birth certificate image posted on the White House website bearing the name “Barack Hussein Obama II” is a “computer-generated forgery.”

Just prior to the White House’s release of the image on April 27, 2011, CNN presented a two-part series which attempted to convince readers and viewers that the “short-form” birth certificate circulated online in 2008 is authentic.

The second video report in the series gave the reader the impression that CNN had been provided with the microfilm of Obama’s original birth certificate when in fact, the microfilm shown was from someone else’s birth record.

CNN ultimately removed that section of the report and declined to address questions, at least to this writer, about its misrepresentation of the microfilm.

The caption to a 2015 interview between CNN’s Jake Tapper and then-Maricopa County, AZ Sheriff Joseph Arpaio, who commissioned the criminal probe into the birth certificate, erroneously tells the reader:

Sheriff Joe Arpaio says that he still believes that President Obama was not born in the United States.

Tapper opened the interview by contending that Arpaio had “trafficked” in the “rather preposterous notion that President Obama was not born in the United States and that he forged his birth certificate.”  However, from the beginning, Arpaio has stated that he did not “care where he came from” and that determining Obama’s birthplace was never a focus of the investigation.

Curiously, since 2007, major media has stressed that Obama was born in Hawaii despite preexisting reports from credible sources that he was born in Indonesia or Kenya.  Nevertheless, the media has characterized the investigation as a quest to discover Obama’s birthplace while avoiding the findings of forgery and fraud in both the long-form birth certificate and Obama’s purported Selective Service registration form.

At one point, Tapper opined that Arpaio had taken a considerable “risk” to his career by carrying out the investigation and suggested that it damaged his credibility.  “Is there anyone, any credible law enforcement person outside of you and your organization and your contractors, who has any agreement with you on this?” Tapper asked Arpaio, to which Arpaio responded that no other law enforcement entity in the nation had “looked at it.”

Last December, Arpaio’s “rather preposterous notion” was revealed in a third press conference as having been supported by the Italian forensic analysis company Forlab and by Hawaii’s Reed Hayes, a well-respected document and handwriting analyst who self-identified as a two-time Obama voter.

After receiving a pardon in late August for a conviction on misdemeanor criminal contempt of court in July, Arpaio was peppered with aggressive questions about the birth certificate investigation and its conclusions by a reporter for Valley Public Radio at an event in Fresno, CA.

Arpaio has indicated that he will continue to speak out on the matter, which he characterized as one of “national security” more than five years ago.

Neither CNN nor any other major media outlet performed its own investigation of the findings, but rather, have insisted that the forgery claim has been “debunked.”

The media is aware of the “fact” that Article II, Section 1, clause 5 of the U.S. Constitution requires the president and commander-in-chief to be a “natural born Citizen.”

“We start with the facts first,” Stelter is now claiming.

CNN Pledges “Facts First,” But What About the Birth Certificate? added on Monday, October 23, 2017

27 Responses to "CNN Pledges “Facts First,” But What About the Birth Certificate?"