DOES NEW MANTRA COVER THE OBAMA BIRTH CERTIFICATE FORGERY? IF NOT, WHY NOT? 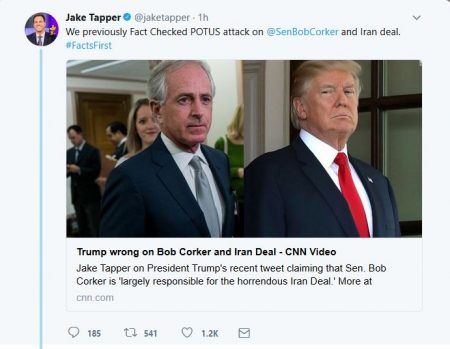 (Oct. 24, 2017) — On Tuesday morning, various major media outlets were responding to a renewed Twitter spat between President Donald Trump and Tennessee Sen. Robert Corker, who is not seeking re-election next fall.

One of those tweeting was CNN’s Jake Tapper, who is now, along with his colleague Brian Stelter, using the hashtag “#FactsFirst” in an apparent effort to rebrand the network as a seeker of facts and not simply a platform for various opinions.

Late on Monday, Independent Journal Review (IJR) responded to CNN’s apparent change in direction by reminding readers that three journalists were terminated for putting forth a story in June based upon one unsubstantiated report about Anthony Scaramucci’s alleged ties to a Russian investment firm.

Trump has long called CNN a purveyor of “fake news;” after assuming the presidency, his quip about the network morphed to “very fake news.”

In his tweet, Tapper provided a link to a soliloquy in which Tapper presented his research into Trump’s claim that Corker “is largely responsible for the horrendous Iran Deal,” an agreement the Obama regime reached with five European countries and the rogue state of Iran in an ostensible attempt to curb that nation’s nuclear ambitions.

Tapper explained why he found Trump’s statement to be inaccurate.  Both at the beginning and end off the broadcast, he said he was reporting for both “CNN and Factcheck.org,” the latter of which determinedly defended the “short-form” birth certificate bearing the name “Barack Hussein Obama II” released online in June 2008.

However, when contacted by this writer by both email and formal letter, Factcheck.org provided no response to a number of questions, including whether or not the organization would permit an independent photographer to take photos of the paper version of the document Factcheck alleged to possess by its own photo exposé.

That article, titled “Born in the USA,” is no longer on Factcheck’s website. 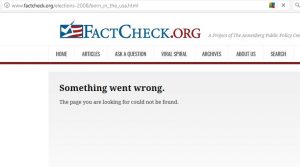 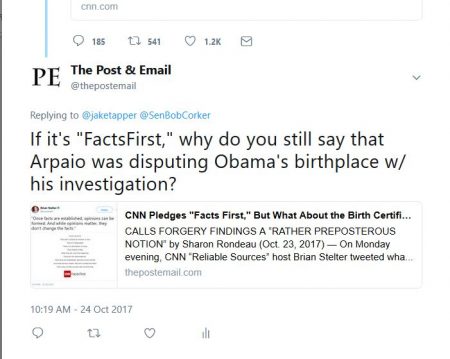 In our Monday night report, The Post & Email pointed out that a subcaption next to a 2015 television interview between Tapper and former Maricopa County Sheriff Joseph Arpaio misleads the reader into believing that the years-long probe into the “long-form” birth certificate image posted at whitehouse.gov included investigating Obama’s birthplace, which Arpaio insisted during the interview that it did not.

As of press time, approximately three hours after we sent the tweet to Tapper, we note no response.