AMONG OTHER “POLITICAL OPPONENTS”

(Sep. 27, 2017) — Stephen Dinan of The Washington Times reported on Wednesday that Democrat members of the House Judiciary Committee have filed documents with the U.S. District Court for the District of Arizona claiming that President Trump’s pardon of former Maricopa County Sheriff Joseph Arpaio is “illegal.”

On July 31, the court’s Judge Susan R. Bolton found Arpaio guilty of misdemeanor criminal contempt of court, for which sentencing was to take place on October 5.  Trump’s August 25 pardon of Arpaio caused that hearing to be canceled.

On October 4, Bolton is hearing arguments from the government and Arpaio’s attorneys as to whether or not the conviction should be vacated, given the presidential pardon, or remain in place without sentencing.

Some outlets have raised the question of whether or not Bolton will observe the pardon.

The conviction emanated from a finding of civil contempt by another judge of the same court, G. Murray Snow, in May of last year. Snow then referred the case for possible criminal prosecution which the Obama Justice Department successfully pursued.

The civil contempt issue was ancillary to a long-running civil rights case in which a number of Hispanics claimed that Arpaio allowed his immigration patrols to operate in violation of federal civil rights laws by practicing “racial profiling” while seeking to apprehend illegal aliens in the county.

On December 23, 2011, Snow ordered the immigration patrols to stop their operations. However, they continued to function for another 18 months, giving rise to the charge and finding of civil contempt.

After the criminal contempt trial began this past spring, Arpaio’s defense attorneys argued that their client was charged by the DOJ under the wrong statute and that he should have been entitled to a jury trial. Attempts to have he Justice Department or the U.S. Supreme Court intervene proved unsuccessful, although the Ninth Circuit Court of Appeals ordered the DOJ to address the issues submitted by Arpaio in April.

In Wednesday’s article, Dinan reported that “The Democrats, led by the party’s senior members on the House Judiciary Committee, said Mr. Trump was showing his own contempt for the judiciary by issuing the pardon, and could even be seen to be endorsing Mr. Arpaio’s original behavior that landed him in hot water.”

Arpaio’s attorneys claim that Snow’s order was convoluted and unclear, to which several witnesses reportedly testified during the trial.

Article II, Section 2 of the U.S. Constitution assigned the president the power to “grant reprieves and pardons for offenses against the United States, except in cases of impeachment.”

Members of the Judiciary Committee are listed here, with Democrats led by ranking member Rep. John Conyers of Michigan.

Some observers have argued that Arpaio’s DOJ prosecution was carried out for “political reasons” and as retribution for Arpaio’s five-year investigation into the validity of Barack Hussein Obama’s “long-form” birth certificate made public in April 2011.

On September 18, The Washington Post published an editorial by Harvard Law School Professor Laurence Tribe and Atty. Ron Fain declaring that “Trump’s pardon of Arpaio can — and should — be overturned.”  In their piece, the authors compared Trump’s granting of Arpaio’s pardon to a hypothetical one extended to former Mississippi’s Gov. Ross Barnett, who in 1962 opposed the admission to the University of Mississippi of a black transfer student, James Meredith.

NPR reported that “Publicly, Barnett promised to block Meredith from the campus in Oxford, despite a federal court order. Privately, he was on the phone trying to strike a compromise with [President John F.] Kennedy.”

Neither History.com nor NPR clarified that the “federal court” which opined that Meredith should be allowed to attend “Ole Miss” was the U.S. Supreme Court.

Ross “was making a fiery speech at an Ole Miss football game” on Saturday, September 29, 1962, calling upon students to “respond” to Meredith’s impending registration on Monday morning, NPR wrote in the same article marking the 50th anniversary of the university’s desegregation.

“On Sunday night, hundreds of white students and protesters from around the region flocked to campus and moved toward the Lyceum, the stately columned building where Meredith would register,” the article reported.

On September 30, Kennedy “addressed the nation to condemn the rioters and state officials for defying the law.”

Kennedy summoned federal marshals, two U.S. Army units and the Mississippi National Guard to quell the unrest at the university.  The marshals escorted Meredith into the building after two people were killed, 300 reportedly injured, bullets fired and tear gas used to disperse the protesters overnight from September 30 to October 1.

On September 13, 1962, Barnett had given a televised address, also carried on radio, beginning with a recitation of the Tenth Amendment.

He followed that with:

Ladies and gentlemen, my friends and fellow Mississippians: I speak to you as your Governor in a solemn hour in the history of our great state and in our nation’s history. I speak to you now in the moment of our greatest crisis since the War Between the States.

In the absence of constitutional authority and without legislative action, an ambitious federal government, employing naked and arbitrary power, has decided to deny us the right of self-determination in the conduct of the affairs of our sovereign state. Having long since failed in their efforts to conquer the indomitable spirit of the people of Mississippi and their unshakable will to preserve the sovereignty and majesty of our commonwealth, they now seek to break us physically with the power of force.

Even now as I speak to you tonight, professional agitators and the unfriendly liberal press and other trouble makers are pouring across our borders intent upon instigating strife among our people. Paid propagandists are continually hammering away at us in the hope that they can succeed in bringing about a division among us. Every effort is being made to intimidate us into submission to the tyranny of judicial oppression. The Kennedy Administration is lending the power of the federal government to the ruthless demands of these agitators. Thus we see our own federal government teamed up with a motley array of un-American pressure groups against us. This is the crisis we face today.

The remainder of the speech can be read here. 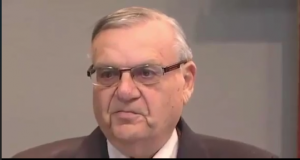 Arpaio has claimed that his immigration patrols were simply enforcing a provision of a 2010 Arizona law upheld by the U.S. Supreme Court in 2012 which “requires” law-enforcers to inquire as to the status of individuals they believe could be illegal aliens.

The use of the U.S. military as a “police force” on American soil is prohibited by the Posse Comitatus Act.  When in March 2009 then-Gen. Martin Dempsey deployed U.S. Army soldiers from Ft. Rucker to Samson, AL, where a mass shooting had taken place, the Army’s Inspector General determined that the Posse Comitatus law had been violated.

No repercussions ensued.  Several months afterward, Dempsey was promoted by Obama to Chairman of the Joint Chiefs of Staff.

As The Post & Email reported last week, attorneys for the prosecution submitted briefs at Bolton’s request in which they recommended, in agreement with Arpaio’s defense team, that Arpaio’s conviction be fully vacated.

House Judiciary Democrats reportedly argued in their recent brief that “impeachment” of the president “can’t be the only option” when addressing what they fear will be Trump’s efforts to “thwart the courts” as evidenced, in their view, by his pardon of Arpaio.

On September 13 of this year, Dinan reported that some of Arpaio’s “political opponents” filed objections to the pardon, contending that it is “unconstitutional.”  One of those groups appears to include the “Protect Democracy Project (PDP),” reported by OpEd News as “a group of former Obama administration lawyers.”

Rubin quoted Protect Democracy Executive Director Ian Bassin as having claimed that Trump’s pardon “celebrated” Arpaio’s “ignoring a judicial order,” although the text of the pardon lauds Arpaio for his five decades in law enforcement following his four-year term in the U.S. Army during the Korean War.

Rubin’s piece echoes the same argument used by Fain and Tribe in their comparison to the Meredith controversy and riots published two weeks later.  Her column further quotes others’ speculation that Trump might grant pardons related to the “Russia” investigations being conducted by former FBI Director and current Special Counsel Robert S. Mueller, III.

Many of Obama’s pardons were granted to offenders convicted of drug-related crimes, although some were issued to those with convictions of “Aggravated identity theft,” “Aiding and abetting mail fraud,” “involuntary manslaughter,” and “bank fraud,” among others.