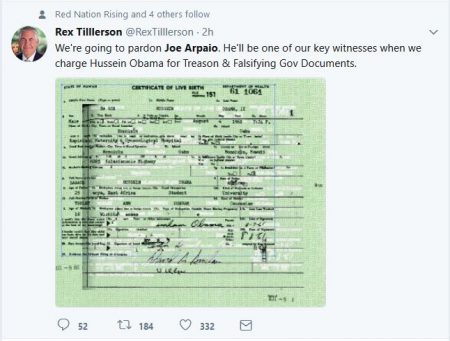 (Aug. 14, 2017) — Responding to the news released Monday afternoon that President Donald Trump is considering pardoning former Maricopa County Sheriff Joseph M. Arpaio following his conviction of a criminal misdemeanor late last month, a Twitter user calling himself “Rex Tilllerson” in a meme of the current Secretary of State wrote of Arpaio, “He’ll be one of our key witnesses when we charge Hussein Obama for Treason & Falsifying Gov Documents”.

The Twitter user, who is not Secretary of State Rex Tillerson, purposely misspells the last name but uses the former businessman’s photograph in his Twitter profile.

“Tilllerson” is referring to a five-year criminal investigation which found that the image purported to represent Obama’s long-form birth certificate posted on the White House website in 2011 to be a “computer-generated forgery.”

The findings of former detective Mike Zullo, whose lengthy investigation was commissioned by Arpaio by nature of Zullo’s leadership in Arpaio’s former “Cold Case Posse,” were corroborated by two forensic analysts studying the image from different disciplines.

Throughout the investigation, the mainstream media declined to conduct its own investigation into Zullo’s conclusions even after Zullo stated, at a second press conference held on July 17, 2012, that the standard of probable cause in the forgery of the birth certificate image was surpassed.

The third and final press conference was held on December 15, 2016, at which time Zullo explained in detail, with the help of a video presentation and narration, how nine points of forgery were identified in the image posted at whitehouse.gov on April 27, 2011 and confirmed by the two forensic analysts, Reed Hayes of Hawaii and Forlab of Italy.

Early in 2011, then-real estate mogul Donald Trump challenged the White House to release Obama’s “long-form” birth certificate amid reports that Obama was born in Kenya or another foreign country and might not qualify to serve as president under the Constitution’s “natural born Citizen” clause.

The media ridiculed and excoriated Trump for pressing the issue, but several months later, the White House posted the image and followed it with a brief press conference in which Obama claimed the image as a true representation of his birth certificate.

Others have received death threats and threatening phone calls for reporting on the issue.

Along with credible reports of Obama’s birth in a foreign country dating back to his successful 2004 U.S. Senate campaign, questions arose in 2007 and 2008 as to whether or not his foreign-citizen father precluded him from being considered a “natural born Citizen” even if he were born in Hawaii, as he claimed.

Zullo has said that the issuance of the birth certificate forgery was conducted “with the intent to deceive.”

In an interview in February 25 on the subject of the birth certificate forgery, Arpaio told radio host and former U.S. Senate candidate Joe Miller, “You always like to know who did it.”