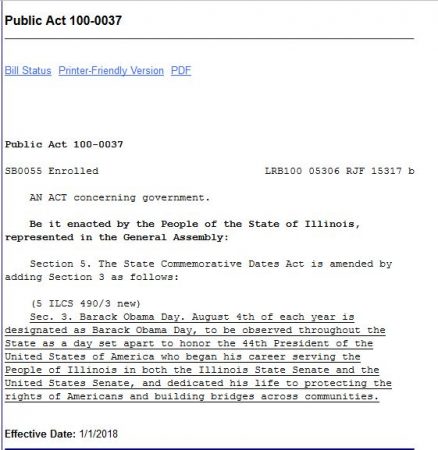 Senate Bill 55, “Barack Obama Day,” was signed by IL Governor Rauner on August 4, 2017, to “honor” one who “dedicated his life to protecting the rights of Americans and building bridges across communities,” as it states, in part, with Public Act 100-0037.

In light of the truth presented, one must pause and consider that a day has been set apart as a “holiday,” or in the vernacular, “holyday” by the state of Illinois to protect a lie on top of yet another lie, an attempted cover-up.

An alleged birth certificate posted by aka Barack Hussein Obama on the people’s White House website on April 27, 2011 (in an attempt to silence the “carnival barkers” and the “sideshow” of others), showed in box 11 the birthplace of the father (Obama, Sr.) as “Kenya, East Africa.“

Kenya did not gain its independence[3] from Great Britain until December 1963.

Why does a reported 1961 U.S. government birth certificate have “Kenya, East Africa” printed on it, when Kenya wasn’t even in existence in 1961?

Why was there not one direct question about that truth that day by the press and multitudes of others in the position of responsibility to do so? We must ask this of ourselves, where are we at this moment on this? Do we need to amend our thoughts and our ways?

Forensic work was completed as part of 5+-year investigation (with no assistance by other government agencies – rather, obfuscation and obstruction) by a 50-year law enforcement agent, former Maricopa County Sheriff Joseph M. Arpaio, duly elected by the people. Nine points of forgery were proven as it relates to the document that was posted on the people’s White House website on April 27, 2011, with the “willful intent to deceive” and cover up the truth[4].

A recent report[5] shows the ongoing and unjustified prosecution of Joseph M. Arpaio, seemingly being left to the wolves.

We the People can do something about it and, in particular, God’s people, by shining light and making noise,[6] that the wall of lies comes tumbling down and the truth be exalted.

Much more has been covered up on a massive scale by those who should be there to serve the people as shall be outlined in the following paragraphs:

There has been a concerted effort by certain people to cover up the truth and fact that I received a threatening phone call[7] from the United States Capitol Police (courtesy of indicted former congressman, Aaron Schock) on July 25, 2013, and an unseemly letter, dated August 23, 2013, from my State Representative’s office, courtesy of Keith Sommer (see attached USCP FOIA request and response).

After having received the threatening phone call from the United States Capitol Police on July 25, 2013, I contacted two offices on July 26, 2013: the State Representative’s office and the Tazewell County Sheriff, to report this creepy and criminal six-minute phone call.

The sheriff’s office directed me to contact my local police department to file a report. I called the Morton PD on July 27, 2013, and was instructed to come in, which I did that day.

I contacted by phone on July 29, 2013 my state representative’s Springfield office to inform them I met with the police, a report was filed, and would plan to visit the local Morton office when representative staff was back from vacation to share this concern in person (for corroboration see attached phone records and FOIA police report).

I subsequently visited my local state representative’s office sometime at the beginning of August 2013 and shared with the assistant on duty that day the events related to the threatening call I received on July 25, 2013.

It is reasonable to conclude that the letter sent by my state representative was designed, in part, to intimidate, prevent, and silence me from communicating personally with my representative these justified concerns. Why else carbon-copy the letter to three law enforcement agencies unless attempting to paint me in a bad light? That attempt has failed miserably. When the truth is told, lies are exposed.

In a scheduled meeting approximately five years ago, I met cordially with State Representative Keith Sommer for about ½ hour to discuss the Natural Born Citizen requirement for President of the United States, and that, as a state representative, he owed it to the people to vet Barack Hussein Obama for Article II, Section I, Clause V Constitutional Eligibility for POTUS. Rather than do the honorable and right thing and address my peaceful Petition for Redress of Grievance, I was instructed by my state representative that I needed to vote for Mitt Romney.

Guess who voted to “honor” a lie with “Barack Obama Day”?-Keith Sommer[8].

I thank the Lord Jesus Christ that there has been a record of truth girt round about me that the Lord has established and that no man or devil can undo.

This Takes The Cake And The Ice Cream Too

HOL’YDAY, n.  A day set apart for commemorating some important event in history; a festival intended to celebrate some event deemed auspicious to the welfare of a nation; particularly an anniversary festival, devoted to religious solemnities; as christmas holydays.
1.  A day of joy and gayety.
2.  A day of exemption from labor; a day of amusement.

HOL’YDAY, a.  Pertaining to a festival; as a holyday suit of clothes.

American Dictionary Of The English Language
Noah Webster 1828
LIE, n.
1.  A criminal falsehood; a falsehood uttered for the purpose of deception; an intentional violation of truth.  Fiction, or a false statement or representation, not intended to deceive, mislead or injure, as in fables, parables and the like, is not a lie.
It is willful deceit that makes a lie.  A man may act a lie, as by pointing his finger in a wrong direction, when a traveler inquires of him his road.
2.  A fiction; in a ludicrous sense.
3.  False doctrine.  1John 2.
4.  An idolatrous picture of God, or a false god.  Romans 1.
5.  That which deceives and disappoints confidence.
Micah 1.
To give the lie, to charge with falsehood.  A man’s actions may give the lie to his words.

LIE, v.i.
1.  To utter falsehood with an intention to deceive, or with an immoral design.
Thou hast not lied to men, but to God. Acts 5.
2.  To exhibit a false representation; to say or do that which deceives another, when he has a right to know the truth, or when morality requires a just representation.

This Takes The Cake And The Ice Cream Too! A Barack Obama Unholy Day. added on Monday, August 14, 2017