“NOBODY WANTS TO TALK ABOUT THE REAL EVIDENCE” 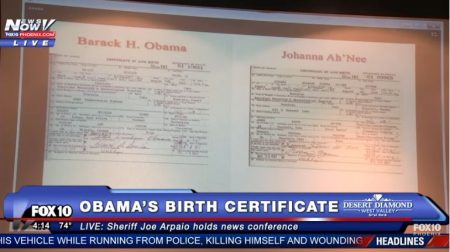 (Apr. 21, 2017) — During the second segment of the first hour of his April 21 “Freedom Friday” show, host Carl Gallups asked guest Mike Zullo to address speculation that a birth certificate said to have been used as a “source document” for the Obama birth certificate forgery is itself fraudulent.

The referenced document belongs to Hawaii-born Johanna Ah’Nee and has been examined in paper form by Zullo, who during the course of his five-year investigation into the Obama “long-form” birth certificate image discovered it to be the source of at least “nine points of forgery” used to craft the Obama image.

The findings were announced at a final press conference on December 15, 2016 and were significantly under-reported by the mainstream media.

On April 27, 2011, an unidentified party posted the birth certificate image at whitehouse.gov with the apparent intent to convince the public of Obama’s claimed birth in Hawaii.

Zullo’s conclusion that the image is a forgery, first made public on March 1, 2012, is now known to be supported by two forensic analysts as announced at the December 15 presser.

The Obama birth certificate investigation was commissioned by Maricopa County Sheriff Joseph Arpaio in August 2011 at the request of 250 of his constituents concerned about their potential disenfranchisement in the 2012 presidential election.

In response to Gallups’s question, Zullo said that “the Ah’Nee document and the Obama document have already been analyzed and the conclusion drawn that elements from one are on the other, and it’s elements from the Ah’nee document are transferred to the other document.  There’s other evidence that we have that I did not disclose in the press conference that solidify that fact…”

With a bit of mirth, Zullo told Gallups, “The fakeness of his (Obama’s) is never going to go away.”

He then recounted that Hawaii Department of Health (HDOH) officials had said that Obama’s birth certificate resided in a “bound volume” in their archives but that former Hawaii Governor Neil Abercrombie said he was unable to locate it in January 2011, just after he took office.

“We know for a fact that the Ah’Nee long-form birth certificate is, in fact, in possession of the Department of Health in Hawaii because Johann An’Nee got it years before this issue ever came up,” Zullo said, calling the document “authenticated.”

Gallups then posed the question, “What’s the congressmen going to do about this?”  Answering his own question, Gallups said, “I’m telling you, you’re going to run into buzz-saws, because the congressmen that were in office for eight years when all this was going on and Arpaio and Zullo was screaming at Congress and the FBI and the Department of Justice and everybody else, saying, ‘There is a massive fraud that has taken place on the part of the American people,’ those same congressmen are still in office.  They are complicit in this cover-up…”

As the segment came to a close, Gallups said that Arpaio’s current pending criminal charge by the U.S. Department of Justice is connected to the birth certificate investigation.

Upon the opening of the third segment, Gallups suggested that information gleaned from the birth certificate investigation is “courtroom-ready.”  He added that “Several government officials contacted Mike Zullo, and we can’t promise you what’s going to happen from it…”

Gallups then invoked the name of “Dennis Montgomery,” who worked as a confidential informant for Arpaio for approximately a year but whose materials were ordered collected by the federal judge overseeing a civil-contempt trial against Arpaio and three of his current and former assistants.

Montgomery had formerly worked as a contractor for the NSA and CIA, where he developed software.  In late 2013, he approached Arpaio contending that 150,000 of his constituents were victims of bank-account breaches by the federal government.

Arpaio subsequently hired Montgomery to organize the data he said he had collected showing the alleged government intrusions.

Zullo said that recent coverage of the Montgomery and birth certificate investigations appearing in an Arizona publication constituted “fake news” because the outlet routinely does not quote him accurately.  For its most recent article, Zullo declined to provide comment.  Neither Gallups nor Zullo named the newspaper nor the individual who is a frequent source of fuel for its articles on the subject.

Turning to the Arpaio civil-contempt trial, Zullo reminded the audience that he was subpoenaed to provide a deposition for which Maricopa County would not provide him counsel.  He invoked his Fifth Amendment right approximately 280 times but later decided to answer questions.

Zullo said that “there is evidence that they never put forward,” referring to the plaintiffs’ attorneys concerning the Montgomery investigation and Zullo’s knowledge of it.  He said that the attorneys, who work for the ACLU, attempted to portray that Arpaio was “investigating” the presiding judge, G. Murray Snow when he was not.

The Post & Email covered the Arpaio trial extensively between April 2015 and the present day.

Zullo also addressed emails released between Montgomery and him which appeared to show that Montgomery’s assembled data was not valuable to the MCSO. “What’s being misrepresented is this notion that the information and all the information Montgomery gave us was garbage,” Zullo told Gallups.  “But I actually testified to the contrary and said there was some information that did turn out.”

“Nobody wants to talk about the real evidence,” he observed.

He drew a connection between the documents released by Edward Snowden in June 2013 and information Montgomery provided to Zullo and Arpaio which Zullo said proved that Montgomery “was there when it happened.”