“PERCEIVED AS A WINNER” 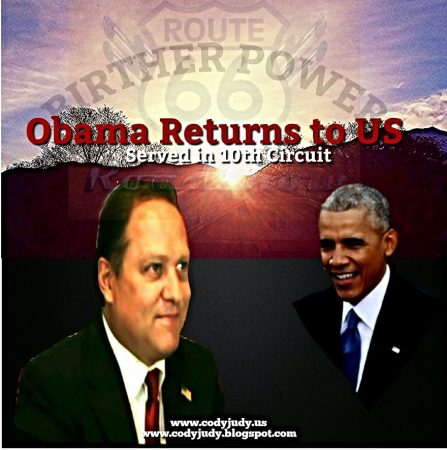 (Apr. 21, 2017) — It might not have been the warmest welcome for the ex-defacto Commander-In-Chief served with the Denver, Colorado Tenth Circuit Court of Appeals [Appearance of Counsel], but perhaps there is some explaining for him to do in a Court of Law to Birthers?

With most anyone whose had experience with a five-year Sheriff Posse Law Investigation on your identity documents and multiple forensic crime units coming to the conclusion that what you represented to the public was a forgery or fraud – fabricated with the motive of getting re-elected, you’re pretty-well resigned to knowing you’re going to do some time and it won’t be a tropical island in paradise.

Oh my gosh! You say there is almost no one who’s been through that? Well, you are right. It usually doesn’t take five years and two crime forensic expert analyses to seat your behind in a Criminal Defense Chair. That is unless your name is Barack Hussein Obama, aka Barry Soetoro and you once occupied the Oval Office and are perceived as a winner by the Main Stream Media.

If you occupy that Office you can pretty-much walk on water as far as avoiding a-n-y-t-h-i-n-g that resembles a TRIAL of Facts against your identity, but now he’s out of that chair and still collecting the salary of a Cabinet Post position, a lot of people don’t think it matters.

That is unless you’re part of the movement Valerie Jarrett credited President Donald Trump replacing Obama with.

Mika Brzezinski wanted to know if there was a moment when Jarrett realized that the person who was going to be the next POTUS had risen to power via the birther movement.

The only problem with the perception of the Main Stream Media when it comes to Obama is it doesn’t yet resemble the honorable retraction of @jstallman in his 4-minute Fake News Tweet that was shared 54K times as the Reporter from the New York Times who saddled a larger group of New England Patriot NFL Superbowl Winners around Obama then Trump this year. It seems Stallman has gone into Twitter Lock-down now.

Obama Returns to U.S. Only to be Served Birther Lawsuit in 10th Circuit Court of Appeals added on Friday, April 21, 2017

2 Responses to "Obama Returns to U.S. Only to be Served Birther Lawsuit in 10th Circuit Court of Appeals"