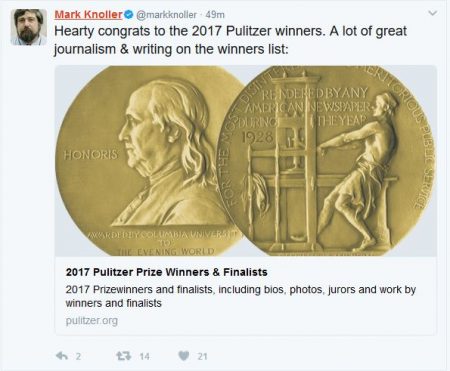 (Apr. 11, 2017) — On Tuesday morning, CBS News White House correspondent Mark Knoller tweeted congratulations and a link to the list of journalists recognized this year by the coveted Pulitzer Prizes in journalism and the arts as announced on Monday.

A glance at the list shows awards given to mainstream media outlets, including The New York Times, virtually all of which are left-leaning.

Prize-winnters fell into the categories of “Winners” and “Finalists.”

The topics for which prizes were awarded include “gender, sexuality and race” in The New Yorker; the Panama Papers as reported by the International Consortium of Investigative Journalists; and an Oakland, CA warehouse fire which tragically killed 36 people in December.

Also included was political coverage in the form of editorials by winner Peggy Noonan and two others designated as finalists.

A reporter from BuzzFeed, an organization which posted unverified documents alleging that Donald Trump could be blackmailed by Russia, was recognized for “agenda-setting reporting on Vladimir Putin’s efforts to project Russia’s power abroad, revealing techniques that included assassination, online harassment and the planting of incriminating evidence on opponents.”

In the category of “National Reporting,” The Washington Post received a Pulitzer for what is described as “persistent reporting that created a model for transparent journalism in political campaign coverage while casting doubt on Donald Trump’s assertions of generosity toward charities.”

The Post’s Eli Saslow, who in 2008 wrote a promotional piece on Obama which erroneously reported him as having “grown up in the Kansas heartland,” was a finalist in the category of “Featured Writing.”

The Boston Globe, The Chattanooga Times Free Press, The Dallas Morning News and USA Today were among finalists in various categories.

The Chattanooga Times Free Press continues to ignore grand jury corruption in its own back yard, as reported by The Post & Email over the last 7½ years, which sends thousands of citizens to jails and prisons each year without constitutional due process.

All of the outlets, winners and finalists share a common trait in their refusal to report on what could be the most significant crime in U.S. history:  that a man who occupied the White House for eight years produced three fraudulent documents which no law enforcement entity would touch save for one Arizona sheriff who now faces a criminal charge by the U.S. Department of Justice.

In 2007, when Barack Hussein Obama entered the national stage as a presidential candidate, the mainstream media failed in its duty to investigate his background to determine if he met the constitutional qualifications of the office, as has occurred with John McCain, George Romney, Ted Cruz, Lowell P. Weicker, and Chester A. Arthur before him.

In the case of Arthur, some accounts indicate that he appeared to be aware that he did not qualify as a “natural born Citizen” after it was discovered that he burned his family Bible, where all of the family’s birth records were kept.

Article II, Section 1, clause 5 of the U.S. Constitution requires that the president and commander-in-chief of the U.S. military be a “natural born Citizen,” while U.S. representatives and senators must meet the requirement of simply “a Citizen.”

The media has often conflated the two terms or confused the issue by introducing the term “native born,” which does not appear in the Constitution.

Arthur’s father was likely a British citizen when his son was born in Vermont in 1829.  At the time, a birth on U.S. soil without regard to the parents’ citizenship was not enough to qualify as a “natural born Citizen” or even a U.S. citizen.  However, with Obama, the same circumstance was ignored:  his father was a British citizen until Kenya obtained its independence in December 1963, more than two years after his son’s purported birth in 1961.

In an August 2015 broadcast, constitutional educator KrisAnne Hall told her audience, “Citizenship is a ‘parent’ thing, not a ‘child’ thing.”

Obama claims to have been born on August 4, 1961 in Honolulu, HI.  The three fraudulent documents attributed to him are a short-form Certification of Life Birth posted on June 12, 2008; a long-form birth certificate posted at the White House website on April 27, 2011; and a Selective Service registration form in two different versions which the Selective Service System has not verified.

The long-form image and Selective Service form were determined to be forgeries by investigator Mike Zullo, who was commissioned by Maricopa County, AZ Sheriff Joseph Arpaio in August 2011 to probe the authenticity of the image posted at whitehouse.gov four months previously.

After several days of analysis, Zullo and his “Cold Case Posse” colleagues were unable to clear the document as authentic, launching what would be a 5+-year investigation conducted almost solely by Zullo at great personal sacrifice and risk.

Not one major media outlet investigated the information and documentation released by Zullo during three respective press conferences between early 2012 and late 2016 on the subject. Rather, the story was partially reported, ridiculed, and marginalized in an apparent attempt to minimize the enormity of the evidence contradicting Obama’s public life narrative.

At the final press conference in December 2016, Zullo revealed that two forensics analysts approaching the image from different disciplines arrived at essentially the same conclusion that he had: that the long-form birth certificate image claimed by Obama to be a representation of his original record could not have emanated from a real, paper document and contained “nine points of forgery.”

The media continues to ignore the evidence, as have Congress, the FBI, the CIA, the NSA, the U.S. Department of Justice, U.S. attorneys, and all other government departments with the ability to arrive at the truth.

Grand juries have been blocked from reviewing the evidence, amassed over time, that Obama is hiding his past and may not have been eligible to the office of the presidency.

Courts and judges have “evaded the issue” and imprisoned or rejected those who raised it.  In May 2015, then-U.S. Supreme Court Associate Justice Antonin Scalia told a questioner on the subject of “natural born Citizen,” “I have to research that.”

Zullo has called the birth certificate forgery “the foundational lie” of Obama’s presidency.

And This Deserves a Pulitzer Prize? added on Tuesday, April 11, 2017