The opportunity to post a citizen petition at whitehouse.gov began with the Obama White House with the requirement that 100,000 signatures be garnered within 30 days in order for the administration to take action on it.

As Obama had promised he would be, in 2010 Lakin asked him to “be transparent” and release his “signed birth certificate.”

Beginning in 2008, Lakin’s submitted numerous written requests to members of Congress, his military chain of command, and to Obama himself for Obama’s documentation. Former military officers have said that as an active-duty officer, Lakin had the legal standing to not only make the request but also to receive a written response from his chain of command.

Article II, Section 1, clause 5 of the U.S. Constitution requires that the president and commander-in-chief be a “natural born Citizen.”  Since Obama ascended to the Oval Office, controversy has continued as to the exact meaning of the term which the Founders left undefined for future generations. While some constitutional scholars believe that a “natural born Citizen” is one born on U.S. soil without respect to the parents’ citizenship, others believe that a birth on U.S. soil to U.S.-citizen parents is the true requirement.

Before the November 2008 presidential election, thousands of U.S. civilians asked members of Congress to investigate Obama’s eligibility after credible reports surfaced that he was born in Kenya or Indonesia and not Hawaii, as he claimed.  Unforeseen at the time, as the Obama “presidency” proceeded, alternative media and a five-year criminal investigation raised additional questions stemming from a shifting life narrative which the major media noticeably suppressed.

On June 12, 2008, a “short-form” Certification of Life Birth image was posted at The Daily KOS and several other websites purported to be the only birth record available to Obama from the state of Hawaii. Since that time, the image has appeared in several different color schemes and in a lawsuit adjudicated by the Alabama Supreme Court, both with and without what could be an official raised seal.

The image was almost immediately denounced as a forgery by experts.

After Lakin refused to follow orders in July 2010, he was court-martialed, convicted and imprisoned at Fort Leavenworth on a six-month sentence handed down by military judge Col. Denise Lind.  The sentence included the forfeiting of all pay and benefits and ended in a dishonorable discharge.

Lind was the same judge who in 2013 meted out a 35-year sentence to then-Sgt. Bradley Manning for releasing hundreds of thousands of classified documents to the government document publisher, WikiLeaks.  Last week, Manning’s sentence was said by Obama to be “nuts,” resulting in a commutation which will cut short Manning’s imprisonment in May. 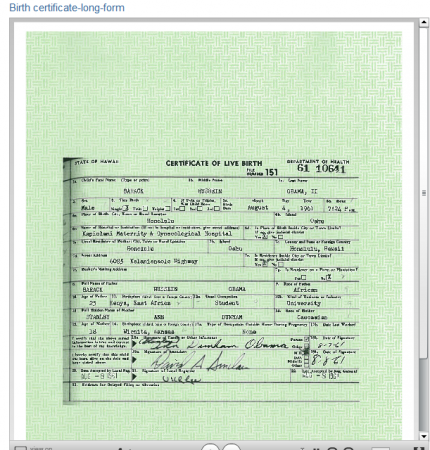 On April 27, 2011, approximately two weeks before Lakin was released from Leavenworth, the White House released an image of what it said was a scan of a certified copy of Obama’s original “long-form” birth certificate maintained at the Hawaii Department of Health (HDOH).  Again, within 24 hours, the more detailed image was declared a poor forgery by several experts who shared their analysis on television, the Internet, and with The Washington Times, among other outlets.

For the first time, the White House posted the short-form image in a black-and-white color scheme which differed from its original presentation at KOS and Obama’s 2008 campaign website.  Contrary to media reports, the Hawaii Department of Health has never authenticated the image.

Obama’s last day in the White House was Friday, with the most vocal proponent of the release of the long-form birth certificate in 2011, Donald Trump, succeeding Obama at noon that day in an odd twist of fate.

On Sunday, CDR Charles F. Kerchner, Jr. (Ret), who attended Lakin’s court-martial, observed that at that time, “all we had was Obama’s forged short-form CERTIFICATION of Live Birth. That at best was a document that says there is another document, i.e., a real birth certificate, which in reality there wasn’t.  They had to forge another long-form CERTIFICATE of Live Birth.  And they only did that after pressure was on them from Terry, my almost 100-full page ads in the Washington Times National Edition from 2008-2012, Dr. Jerome Corsi’s book, “Where’s the Birth Certificate?” and finally, Donald Trump’s statements to the media back in the spring of 2011. When Terry stood up, Obama was less an empty shell regarding his ever-changing life story than he is now. If anyone deserves a pardon, it is Terry.”

In 2013, Lakin published “Officer’s Oath,” a story about his life and the conviction that led him to sacrifice his military career for the purpose of attempting to discover whether or not Obama was constitutionally eligible to serve.  That question remains unanswered to this day.

In a video wherein Lakin described the chapters of the book, he reiterated what had become his frequent mantra:  “The Constitution matters; the truth matters.”  He spoke of “a healing process for our country” in the event that the truth about Obama’s past might some day be revealed.

Zullo’s attempts to engage members of Congress in examining the evidence of forgery for themselves appeared promising in 2013 but resulted in no action, and the press continued running political cover for the Obama White House, particularly by failing to seriously report investigators’ findings.

On Saturday evening, The Post & Email asked Wilmott his reason for launching the petition, to which he responded:

Clearly, if Barack Obama had a birth certificate showing that he was born in the United States of America, Terry Lakin would never have been in the position to question the fact that Obama was not forthcoming with any identity documents.  It’s obvious to me that Barack Obama has something to hide and that Terry Lakin is a principled man who is a tremendous asset to the American people and the U.S. military.  Not only is he a trained soldier, but he is a trained medical doctor, and for him to merely ask for proof of Obama’s legitimacy was in line with his officer’s oath and the Constitution.

The fact that Obama can’t produce anything is a red flag to me, and the fact that he never answered Terry Lakin is a red flag.  No commander-in-chief is going to ignore a letter from a decorated officer whose record was without blemish; he’s going to put that officer’s mind to rest and produce the documentation that clearly shows that he is eligible to be President of the United States.

Obama did not do that, and because he did not do it, it is a clear indication to me that he could not do it.  The fact that he did not answer Terry’s letter is proof positive in my eyes that Obama is a fraud and Terry Lakin was railroaded out of the military.  He did nothing wrong, and because I know he did nothing wrong and that he was involved in a kangaroo procedure, he needs to be reinstated, and America at large will be better off having him in the military if that is his desire.

The fact of the matter is that this should be a concern for all American citizens. Everyone who values freedom and justice should be concerned about the fact that not only did so-called “President Obama” not even answer an officer, but he then proceeded months later to produce a “birth certificate” that has been proven repeatedly by numerous forensic experts to be a complete forgery.

So you have a president who refused to answer an officer’s letter, and then, when the heat was on, he produced a forged so-called birth certificate.  That is enough to raise the eyebrows of any American and to say that this should be investigated.  This kind of conduct proves that Obama has something to hide, and it is simply unconscionable.