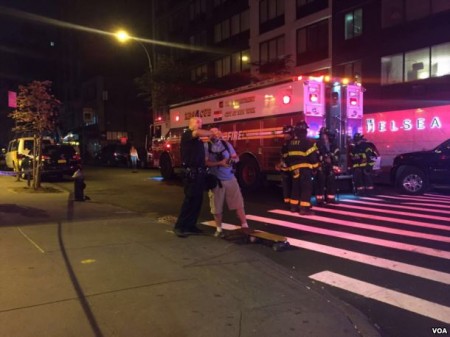 (Sep. 19, 2016) — “Good morning, ladies and gentlemen, and welcome to our show. Hello, I’m Chief New Leaf and I’ll be your host for this episode of ‘Pulse of the Nation.’ What we do is conduct street interviews and here comes a young lady.

“Excuse me, Miss, got a minute to answer a question for our viewers?”

“Why, of course. My dog and I watch your show every night. What’s the question of the day?”

“What would you do to stop these acts of terrorism in our country?”

“Besides deporting each and every Muslim from our country?”

“Then I haven’t a clue. I don’t have the foggiest idea how to protect ourselves if we don’t remove the problem. It’s like you have a leak in the roof. What we’re doing is gathering more pots, pans and buckets when we ought to repair the roof. All we’re doing is treading water and not getting anywhere. Meanwhile, with every Muslim and illegal immigrant who enters our country the leak is just getting bigger and bigger. And every drop that misses the bucket is just one more dead American. Do you think for one New York minute Hillary gives a hoot about one American life when she obviously didn’t give a hoot about one of her ambassadors?

“It’s like this: on the other side of your fence in your back yard there’s a fire-ant nest. Once in a while you get bit and once in a while somebody else in the household gets bit. One day you have some friends over for a backyard barbecue and their little baby gets bit.

“Everyone is pointing their fingers at you for being TOTALLY irresponsible: you knew there was a problem and did absolutely nothing to correct it. Nothing.

“Okay; good answer. It may please you to know that our station took a weekend poll about this very problem The question was this: do you think that deporting murderers from our country is a good thing or a bad thing? Not surprisingly, our viewers answered that deporting the bad guys is a good thing.”

“The basic problem is that people still regard Islam as a religion and not as a sick political philosophy, just as the NAZI Party was in World War II Germany. As long as we Americans can’t add 2 and 2 and get 4 we’ll keep getting killed. More Fort Hoods and more and more murders in malls and everywhere else. As long as we keep on doing nothing, it’ll just keep getting worse.

“Either we address the Muslim problem or we are finished as a country; either we do the right thing for our citizens or we don’t; either we whine about our citizens getting raped, beaten and murdered or we prevent the abuses against us.

“And I also say that anyone who uses our laws to do us in deserves to be thrown out with the dirty bath water. In other words, you can’t kill us and hide behind ‘citizenship’ and the ‘Constitution.’ Here’s my train. Bye.”

“Goodbye, and thanks for talking with us. So the key to keeping America safe is to get rid of the bad people and the lawbreakers: deport them. And I see that our time is up and so, on behalf of the crew, I’ll be wishing you all a goodnight: Goodnight.

“Good show. So the people are starting to see that we don’t have to have these murderers among us. Deportation is the key to our well-being, that’s if anyone even cares enough about our country anymore. I’m surprised that Hillary isn’t behind bars by now, really. Burger time: my treat.”

One Response to "The New Reality: STUPIDITY (RR)"