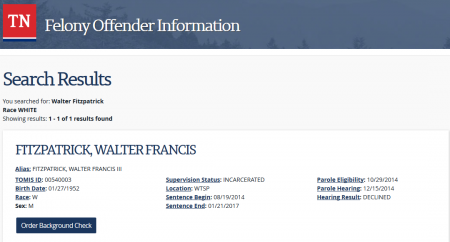 One was five pages and the other 15, with the second a follow-up to the first.

Nearly two years ago, Fitzpatrick was sentenced to three years in state prison after attempting to approach the McMinn County, TN grand jury with evidence of corruption on the part of judges, prosecutors, McMinn County Sheriff Joe Guy and his deputies, and then-grand jury foreman Jeffrey L. Cunningham.

Throughout Tennessee, grand jury foremen are hand-picked from the community at large by the presiding criminal court judge despite the Tennessee District Attorney General Conference describing a grand jury as “a group of thirteen citizens chosen from the jury panel. One of these thirteen is the fore person and will preside over the grand jury.”

The personal choosing of a grand jury foreman by a presiding judge contaminates the Fifth-Amendment provision of a fair and unbiased evaluation of evidence before a citizen of the community can be charged with a crime by the government.

On August 19, 2014, Fitzpatrick was given a three-year sentence by then-Senior Judge Jon Kerry Blackwood, who is now in full retirement. During the hearing, eyewitnesses, supported by a recording, reported that Blackwood decried citizens invoking their “constitutional rights” in a lengthy monologue in which he also referred to Fitzpatrick as “a moral coward.”

At the close of the hearing, Fitzpatrick was immediately taken into the custody of the McMinn County Sheriff’s Office, where he remained for approximately five days, then was relocated to the Bledsoe County Correctional Complex (BCCX), the Tennessee Department of Correction (TDOC) intake center.

In early December 2014, Fitzpatrick was moved to the Northwest Correctional Complex (NWCX), one of Tennessee’s worst prisons by many accounts.  After several months, Fitzpatrick discovered a prisoners-for-profit scheme garnering thousands of federal taxpayer dollars for the facility by enrolling inmates, qualified or not, into the Pro-Social Life Skills course.

Inmates who refused to take the course are disciplined or threatened with disciplinary action.  While Fitzpatrick was threatened twice, it is unclear whether or not the punishment was meted out.  To the best of our knowledge, the same threat remains in place against NWCX inmate Jerome L. Johnson, who became acquainted with Fitzpatrick and also refused to take the course for fear of self-incrimination based on the mandatory workbook exercises.

At NWCX, Fitzpatrick’s cell was often raided without provocation and personal items, including stamps, stolen and not returned.  A complaint filed with TDOC Deputy Commissioner Jason Woodall never received a response.

Just four months after entering prison, Fitzpatrick was offered parole but declined it.

After refusing to take part in PSLS, Fitzpatrick was enrolled in Adult Basic Education (ABE) despite his having graduated from high school, served 20 years in the U.S. Navy, and earning Bachelor’s and Master’s degrees.  ABE is intended for inmates in need of remedial education in math, reading and writing who did not obtain a high school diploma or GED.

Without explanation but after The Post & Email reported on the second “prisoners-for-profit” course scheme, Fitzpatrick was released from ABE.

On March 1, Fitzpatrick was moved from NWCX to West Tennessee State Penitentiary (WTSP), another dangerous prison expected to undergo some changes this year.

In the two letters received on Tuesday, Fitzpatrick reported that for the last six weeks, his outgoing and incoming mail has been held, although he did not disclose the reason. He described the last 50 days as “rough and roughed.”

On May 25, The Post & Email contacted WTSP to ask about Fitzpatrick and was told only that “He’s still here.”

With Irion located in Knoxville in the northeastern part of the state, Fitzpatrick has always been housed in the western part of Tennessee at least eight hours away.

Over the course of nearly seven years, this publication has covered cases involving Tennessee public corruption arising in the counties of Roane, Sumner, Monroe, Madison, Trousdale, Tipton, Union, Sevier, Lawrence, Polk and Bradley in which a common pattern of abuse is apparent.  Beginning with law enforcers, average citizens, many of whom are poor and without means, are accused of a crime on shaky or non-existent evidence, which is then presented to a grand jury already primed to issue an indictment. With a hand-selected foreman in “command,” an indictment is virtually assured; the prosecutor then charges the individual, who is arraigned and jailed if unable to make bail.

Inmates in county jails are often mistreated, beaten and held sometimes for more than a year before they have their “day in court.”  They are then put through a mock-trial process with a public defender or private attorney who is actually working against his client and on the side of the government.

The defendant is inevitably sentenced to years in state prison in order to fill to capacity the 14 institutions throughout the state, four of which are run by a private company, Corrections Corporation of America (CCA), on which The Post & Email has reported extensively over the last several weeks.

The system has been finely honed to promote predation of as many citizens as possible in order to collect court fines, fees, garnishments from inmates while incarcerated, fill the prisons, and then collect parole fees if the individual is fortunate enough to be released.

Parolees are often rearrested on invented transgressions so as to keep the prison mill-wheel turning.  Those who return to prison are often given enhanced sentences.

Even the mentally- and physically-handicapped do not escape the Tennessee prison racket.

Victims of the scheme who happen to have means often lose those assets, which become collateral for their temporary release from county jail until “trial.”  Property, money or other collateral is routinely not returned by the courts and various sheriff’s departments after the defendant is sent to prison without any type of due process.

The Post & Email has received letters with documentation from a number of inmates whose parole dates arrived, only for them to be told that the parole board decided arbitrarily that they needed to serve “one more year.”

Whether or not that occurs in Fitzpatrick’s case remains to be seen.

One Response to "Walter Fitzpatrick Breaks His Silence"