The prison is operated by Corrections Corporation of America (CCA), a private company which runs 70 prisons across the country and is based in Nashville.

CCA considers the Tennessee Department of Correction (TDOC) to be a “longtime trusted partner.”

Inmate and visitor reports continue to say that the prisoners are being kept in substandard conditions including a lack of hot water, operating shower facilities and personal necessities.

Gang affiliations are reported as common among the current prison population.  One visitor told us that prison management “uses gang members to perform nightly lockdown” for lack of staff.

Adequate medical care is difficult to obtain in any Tennessee prison, but TTCC is reportedly particularly ill-prepared to meet the needs of diabetics and others who require daily medication.

The mainstream media, including the Associated Press, has publicized complaints voiced by inmates’ relatives who reported wait times for visitation of up to five hours as well as truncated or canceled visits due to frequent lockdowns.

On May 26, Dave Boucher of The Tennessean wrote, “For weeks, family members of inmates at Trousdale Turner have contacted The Tennessean with concerns about how their loved ones have been treated. Those family members have noted understaffing, saying their loved ones have been on ‘lockdown’ — kept in their cells for up to 23 hours a day — for days on end. They’ve also complained about the solitary confinement practices and about inadequate medical treatment.”

A regular visitor to the facility told The Post & Email that the inmate she visits “has been confined to a cell for the majority of his time there – no work, no classes, no medical visits.”  The use of “excessive force” was also reported both to this publication and The Tennessean.

Further, the relative reported that she was informed by the inmate that since opening, TTCC has incurred nine deaths.

Of the present conditions within the prison, a recent visitor told The Post & Email:

The person who is on trash detail and covers the entire facility not just one pod has reported that he is finding 50-100 grievance forms at a time in the trash. Inmates have submitted these forms and they are being thrown away. “We have no grievance process here. At other facilities there is a locked box in every pod where you can submit a grievance form. A person from the grievance board retrieves these personally so that it gets directly to them. That is not the case at TTCC,” she said an inmate told her. “We have no voice here. A guard actually said ‘I don’t care what you write – it’s not going to get there,'” he said.

The visitor then added:

They are breeding hostility among the inmates because they are making the units COMPETE against each other. The pods are inspected and if satisfactory then you should be come out, “pass or fail only, that’s how it is supposed to be.” But at TTCC the unit manager is making them compete with other units for the “cleanest pod.” This is breeding hostility between people we don’t even know.

The absurd competition they started – between the units, that determines if they get out of their cells — it’s hideous.  I read the memo and am stunned. These men are only allowed to shower 1x every 3 days (at least during that time following the memo). I then did a google search on the health hazards of that kind of routine. Keeping in mind the crowded conditions they live in, that their laundry, sheets, etc. are only sent once a week – the facility is a health hazard. I wonder how this affects the Hep-C epidemic?

Regarding the current state of lockdown, she told us:

The inmates at TTCC came from other facilities and know what is expected of them, what the rules are, how the prisons is structured and the routines. None of that exists at TTCC – it’s chaos and has gone so far as to cause 2 deaths to inmates who required medical attention they did not receive in time. “A lot of us came here from other prisons where we had jobs, structure, rules. We  don’t have that here – many who had jobs are still waiting to get back to work and instead we’re on lockdown and can’t even file a grievance report without being taunted by guards reminding us we are at their mercy,” she quoted an inmate as having told her.

Currently they get 2 hours a day off lockdown. Each tier is released for 2 hours, because the administration says, “This is working.”  The low security side was released from lockdown; however, they have prisoners who are classified “minimum-2” who are mixed in with higher classified inmates. When something happens in another building that gets that unit locked down, the whole complex is locked down. Now they are initiating the “cleaning competition” between pods. These inmates have learned that the administration at TTCC will change guidelines, rules, standards and move the line – on a whim, and cost lives in the process (medical delays, mismanagement)  When will the State of TN take this seriously?

Her account corroborated those of numerous inmates from whom we have received letters over the last three weeks.

One inmate reported to us in a letter that “…when I arrived here on the 28th of April a Thursday i know know this prison wasn’t ready to house inmates because it was 45 of us inmates and we got here at 2:00 p.m….it took these people all night to process 45 inmates we didn’t get to our guild until 5:15 a.m…” [sic]

As of this writing, instead of 14 position openings at the facility as of two weeks ago, CCA lists nine.

In his May 26 article at The Tennessean, Boucher wrote, “CCA has a five-year, $276 million contract to operate the facility. Although state law essentially allows for only one private prison, the department is using Trousdale County as something of a pass-through: Trousdale pays the money to CCA after receiving the money from the state.”

The visitor who recently shared her observations with The Post & Email said that the TDOC insisted that TTCC open its doors to inmates in January while knowing that the facility was understaffed.  However, in March, TDOC Correctional Administrator Tony Howerton visited TTCC and cited the facility for a number of violations, including the use of excessive force.

There are four CCA-operated prisons in Tennessee.  The law to which Boucher referred is TCA 41-24-103, which reads (click twice to enlarge):

Walter Francis Fitzpatrick III, who attempted on numerous occasions to demonstrate lawlessness within Tennessee’s county grand juries, was imprisoned for his efforts in August 2014. While at the Northwest Correctional Complex (NWCX) last year, he discovered an active prisoners-for-profit operation which garners tens of thousands in taxpayer dollars for the facility’s enrollment of inmates in educational courses for which they may be unqualified or have already taken.

The laws were never repealed. 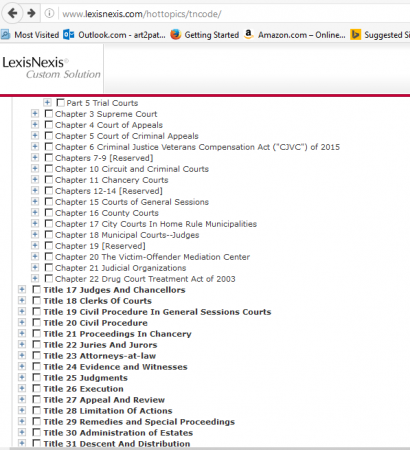