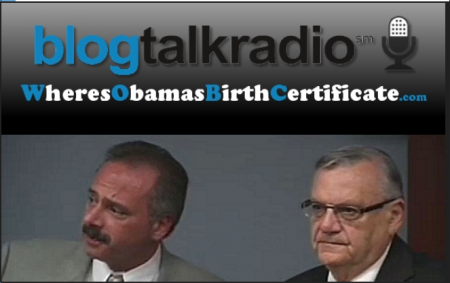 For a number of years, Gallups has covered the Obama eligibility question on his show and in 2013 accompanied Zullo to the Conservative Political Action Conference (CPAC) to present evidence compiled by the posse demonstrating that the long-form birth certificate image posted on the White House website in April 2011 is a “computer-generated forgery.”

The posse’s four-year investigation showed early on that not only is the birth certificate image fraudulent, but also the Selective Service registration form mailed to various FOIA requesters since 2009 bearing the name of “Barack Hussein Obama.”

Prior to the launch of the Cold Case Posse’s investigation into Obama’s documentation in September 2011, many Americans had harbored questions concerning Obama’s constitutional eligibility to serve as president under Article II, Section 1, clause 5 of the U.S. Constitution, which mandates that only a “natural born Citizen” may occupy the position of the nation’s chief executive.

Beginning in 2007, the media and members of Congress ignored or gave only lip service to the concerns of thousands, if not millions, of U.S. citizens concerned that the White House could be occupied by a usurper if Obama were to win the 2008 election and was, in fact, born overseas as many sources, including the Associated Press and NPR, had reported prior to the launch of Obama’s presidential campaign.

Today, the same questions persist in regard to 2016 presidential candidate Ted Cruz, who was born in Canada to a Cuban-citizen father who later became a citizen of Canada. Cruz insists that his mother at no time became a Canadian citizen and that his birth to her, regardless of its location outside of the United States, renders him a “natural born Citizen.”

In August 2013, Cruz presented his birth certificate from Canada to The Dallas Morning News, which published it in an article while at the same time reporting that Cruz continued to hold Canadian citizenship. Cruz’s U.S. Senate office denied knowing that Cruz was at that time, and had been his entire life, a citizen of Canada.

The Dallas Morning News contended that Cruz was also born with U.S. citizenship, but Cruz has shown no documentation proving the newspaper’s claim.

In May 2014, Cruz filed an application to renounce his Canadian citizenship. On the application, the question as to whether or not the applicant possesses or will soon possess citizenship in another country is posed and proof of either situation requested.

According to CNN, a Canadian who attended Princeton University at the same time as Cruz and was a fellow member of the Debate Club told the news outlet that Cruz was aware at that time that he possessed dual U.S.-Canadian citizenship and had openly speculated as to whether or not it would impinge upon his ability to run for U.S. president some day.

The Canadian government does not release applications for renunciation of citizenship without a signed privacy waiver from the applicant.

Having traveled the United States as well as twice to Hawaii during his investigation of Obama’s documentation, Mike Zullo has of late focused his efforts to highlight that Cruz was born overseas and “may very well be deliberately misleading the American public on this very issue by omitting specific points relating to ‘natural born Citizen’…”

The Republican National Committee (RNC) has not responded to media or citizen inquiries as to the eligibility of Cruz, Marco Rubio or Bobby Jindal, the latter two of whom have suspended their campaigns.  A formal complaint filed with the Senate Ethics Committee by eligibility and legal researcher Robert Laity asserting that the three aforementioned Republican candidates should not be permitted to seek the presidency is awaiting a response, according to a tweet Laity issued on Thursday morning.

In a voice message left on Thursday evening by WOBC founder and owner Mike Volin, The Post & Email learned that Gallups will appear from 8:00 p.m. to 9:00 p.m. EDT on Friday night and Zullo for the entire two-hour show.

The promo for the broadcast reads, in part:

This Friday, Lt. Mike Zullo, Commander of Sheriff Joe Arpaio’s Maricopa County Cold Case Posse, will be our featured guest. Lt. Zullo is best known as leader of the Posse’s investigation of Barack Obama’s fraudulent identity documents. He is also well-versed in the background and associations of current presidential candidate Ted Cruz.  The main focus of this the broadcast will be on this latest attempt by an ineligible person to usurp the office of President of the United States.

Lt. Zullo will also release some new details on the Obama fraud investigation.  Also appearing will be Pastor Carl Gallups, best-selling author and host of Freedom Friday with Carl Gallups, broadcast each week on WEBY radio and live-streamed over the internet.

Lt. Zullo will be taking calls.
Phone lines will be open.