THEY “DON’T HAVE A CLUE” 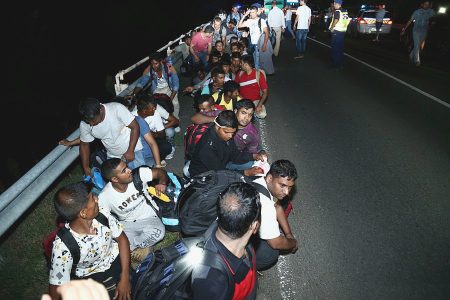 (Mar. 30, 2016) — “Good evening, ladies and gentlemen, and welcome to another exciting episode of ‘Pulse of the Nation’. We’ve a new format tonight that I’m sure you’ll enjoy. Actually, it was our sound-boom girl, Molly, who suggested it. And here comes our first contestant.

“I know who you are. You’re that Roving Reporter guy, aren’t you? Roving and crew. Sure, ask away.”

“We’ve a new format and you’re our first contestant. For $20, do you know who OPOVV is?”

“A Polish Count who sung opera? The one who sung Puccini’s Turandot: ‘Nessun dorma’ off the charts?  ”

“Never heard of him, sorry.”

“Too bad. Can you venture a guess who he named as his Secretary of State?”

“No kidding, but we like to refer to him as Mr. Trump.”

“No, because you didn’t answer any of the questions, remember?”

“Ever have a job, young man? You didn’t earn it so you don’t get it, understand? You collect welfare? That explains your behavior, now, wouldn’t it? Run along now.”

“For the $20 that you didn’t earn? And all on camera? I bet you’re an Obot. Like Obama, do you? Like illegal immigrants killing Americans? Hey, Molly, maybe not such a brilliant idea after all. ”

“Bye. And here comes our next contestant: a young lady. Hello.”

“Hello, Roving and crew. Watch your show every night. What’s up?”

“$20 in it for you if you can correctly answer this question: Who advocated the deportation of the illegal immigrants first, Trump or OPOVV?”

“You mean there’s a time limit? You didn’t say anything about a time limit. You wouldn’t be making up the rules as we go along, would you? I say Trump.”

“Wrong. OPOVV, who was a presidential candidate way back in 2012. Funny thing about it is that Trump’s platform and he are so much alike as to be indistinguishable. In many respects they could be twins, except for the money part. Trump has money, while OPOVV doesn’t have any, but get this:  they both refused to accept donations of any kind from anyone. Didn’t want any favors owed. Just want to fix America and go home and leave the platitudes and legacies behind. ”

“Never heard of this OPOVV. Did he ever have any rallies like Trump does?”

“Yes, but not as big. But here’s an interesting fact: OPOVV never, and I do mean NEVER, had any protesters. You see, the price of admission to one of OPOVV’s presidential rallies was to ‘Show Your Gun.’ And a loaded one at that, or they wouldn’t let you in.”

“A few. Fun events: lots of cheering and laughing again like Trump’s. Always started off with the Pledge of Allegiance and our National Anthem. They always ended with singing ‘Silent Night.’

OPOVV said that’s how the USO tours ended when he was overseas in the military. Too bad you missed it.”

“I voted for Obama so I wouldn’t have gone anyway. And I don’t believe in guns.”

“So there’s no guns in so-called ‘Safe Zones’? Lady, I hate to say this, but one day you’re going to be very disappointed for being stupid.”

“You did it, all by yourself, and on national TV. Wait, I’ve a quote for you: George Higgins wrote in his book, ‘The Friends of Eddie Coyle’: ‘Life is hard but it’s a lot harder when you’re stupid’. See you.

“Well, folks, seems like our time’s up. So the American people have been totally against illegal immigrants and a host of other stuff for as long as I can remember, but the insulated pundits in New York and Washington still don’t have a clue what’s going down.

“The American people are SICK AND TIRED of ‘business-as-usual’: bribes; kickbacks; favors and it all leads to complacency: accepting less than stellar behavior as ‘the-new-normal’. You know who suffers? Our troops suffer with untested and obsolete weapons, not to mention Rules of Engagement designed to favor non-combatants rather than the safety and the well-being of our troops.

“Name me one, just one, politician who came to LTC Terry Lakin’s aide when he was railroaded in a kangaroo Court-Martial, that and not one word from any of them about Obama’s ineligibility.

“My crew and I support Trump, and if you don’t, then you don’t care much for saving the Republic; that’s my take. Get rid of the establishment’s Fat Cats. Good riddance. And that’s why every entrenched Democrat, Republican or Independent is deathly scared of Trump: they’re afraid of him upsetting the apple cart: the end of the ‘Gravy Train’. The ‘Stop Trump’ idiocy is but the gasping breath of a corrupt bygone era that got caught with their hands in the cookie jar. And that’s exactly why people support Trump and will vote him as our next POTUS. It’s not unlike the ‘sic-’em the dog after the bad guys kind’ of feeling when you cast a ballot for Trump. It’s a REAL good feeling.

“And I’ll say one more thing: the conditions of what made the warped philosophy of the ‘Pentagon Papers’ possible are flourishing just as much today as during the Vietnam era. It’s the same mindset; the same way of doing business; the same modus operandi with the same results: our government lies and the media doesn’t call them on it. As I said: ‘Business as usual’.

“And what are the results? The National Debt is 20 trillion; open borders have resulted in lost jobs for Americans and a much more dangerous environment in which to raise our young. Also the spreadsheet imbalance with our trading partners is beyond lopsided: it’s criminal, ripe for payoffs and bribes, which translates directly into lost jobs and a stagnant economy. One step closer to Third World status, and if you disagree just look at our infant mortality rates and how our high schools student compare with the students from other countries. Not good to acknowledge: it’s down right embarrassing.

“Thanks for watching, and with that I’ll be saying goodnight: Goodnight.

“Let me be the first to suggest that’ll be the end of any contests; str you with me? It was a great idea, Molly, but it didn’t work. It might’ve worked; it should’ve worked, but we failed to take in account the stupidity of the American people. After all, look at the last two Attorneys General if anyone had any questions, besides the utter failure of the de facto president.

“We’re out of here. What do you say we grab a burger? My treat.”

2 Responses to "The Quiz"