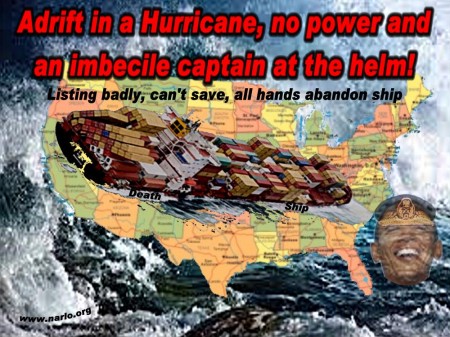 (Oct. 18, 2015) — It has been pretty well documented that major man-made disasters very seldom have a single cause. There are always ignored problems first before the third or fourth cause precipitates the disaster. Car, train, airplane and ship disasters follow this pattern.

The final cause of the Air France crash several years ago over the Atlantic at night appeared to result from the loss of airspeed information from the airplane’s two pitot tubes that had iced over, causing the pilots to make wrong decisions in trying to stabilize the flight. It was too late by the time the pilots recognized the problem. But there were other ignored smaller events that led up to the pitot tubes icing over.

The El Faro cargo ship that just sank off the Bahamas with the loss of all hands was probably caused by one major factor, and that was the captain’s decision to sail his aging ship into Hurricane Joaquin. The ship might have survived the hurricane if it had not lost power. Once the ship lost power, a whole cascade of problems erupted beyond the ship’s crew to manage. As the problems grew, its immediate future was preordained. The ship would break up in heavy seas and sink. When all the evidence is collected and sifted through, it won’t change the fact that the ultimate responsibility for the ship’s sinking was the captain’s.

A nation is a ship in many ways, sailing in stormy seas most of the time. The storms that a nation must constantly endure can result from either internal or external forces. If the nation loses direction, purpose and resolve, if it dissolves the foundations upon which it was formed, if the president (captain) is afraid to use its guns in defense of the nation, or stops the fuel flowing to the engines of growth, or punishes or divides the crew to the point of mutiny and chaos, the nation (ship) will come to an untimely end and its people will suffer the consequences of either slavery, starvation, or death. Mistakes or bad judgment by leaders have been known to cause great harm to the general population. Without strong leadership and an honorable, capable crew that has confidence in the captain and the captain’s leadership, the nation can and probably will die unless new, strong leadership and a seasoned crew take the helm, provided, of course, that the people even care.

The good ship USS America is in dire straits. There is little leadership, the engines are working at half power, ready to shut down completely, and the “crew” is so badly divided and has so little confidence in the captain that division, conflict and violence, or even mutiny (revolution) is a real possibility.

So, ladies and gentlemen, “Who the Devil is Running This Damn Country Anyway?”

Who is running the country when the borders are wide open, illegal immigrants are pouring into America by the millions every year and the cultures they are bringing to America are in stark contrast to the concepts of a free society in a Constitutional Republic? They are a massive financial drain on productive Americans. Illegal alien criminals and gangs roam free to shoot and maim innocent Americans after being deported multiple times, and they have no intention of assimilating into American culture, no matter where they are from, be it Mexico, Central or South America, the Middle East, Africa, India, China, or anywhere else. They just want to take advantage of government benefits.

Who is running the country when school officials in Jackson Hole, Wyoming cancel “America Day” because it might offend non-Americans?

Who is running the country when school officials tell students that they can’t wear or fly the American flag because once again, it might offend non-Americans? But it was OK for the Mexicans to fly the Mexican flag.

Who is running the country when the streets of our big cities are sanctuaries for illegal aliens, gangs, drugs, crime and murders that happen almost every day?

Who is running the country when our public schools and colleges offer only one view, one ideology and one perspective for the nation and the world, where that one view, ideology and perspective is the antithesis of the principles of individual freedom and unalienable rights, the foundation of our once-free nation?

Who is running the country when the government can shove nationalized health care down the throats of Americans and then openly lies about the benefits and the cost?

Who is running the country when the U. S. Supreme Court can overturn 5,000 years of culture, not to mention the natural order, by dictating that marriage can be between people of the same sex and by so doing, legalize the very definition of sodomy?

Who is running the country when we allow the radical cult known as environmentalism to override and supersede every known property right, as guaranteed by the U. S. Constitution, and add huge costs to virtually every product Americans purchase, including homes, gasoline and food?

Who is running the country when federal agencies such as the Environmental Protection Agency, Department of Energy, Department of Education and Health and Human Services, in addition to local and state bureaucracies that act independently of congressional oversight, flagrantly violating the U. S. Constitution?

Who is running the country when so much money is being paid to citizens to buy them off for their votes such that there is not enough money for the maintenance and replacement of vitally needed roads, bridges and other infrastructure and our military readiness is dangerously degraded?

Who is running the country when the government allows a tax collection agency to run roughshod over the people, inventing the law as they go along and purposely targeting those individuals and groups that don’t toe the liberal line? Why hasn’t someone at the IRS gone to jail?

Who is running the country when a group of seven private individuals at the Federal Reserve, answerable to no one, have so much power that they can send America reeling into bankruptcy, or shoved into hyperinflation, simply by adding or subtracting money to or from the banking system? That is way too much power for seven people to have in any country.

Who is running the country when the President of the United States trades five vicious Talibans for a deserter and negotiates a hopelessly flawed deal with a known terrorist regime that proudly boasts its desire to wipe Israel off the map and kill every American it can find?

Who is running the country when we allow a Russian KGB thug to rub America’s nose in IT and allow that thug to violate international law by invading a sovereign country, while the President does nothing?

Who is running the country when the President of the United States withdraws troops from the battlefield upon which thousands of our brave men and women died or were permanently maimed, in an unstable Middle Eastern country and in an unstable Middle Eastern Region, when the President’s advisors told him it would lead to a huge vacuum for radical Islam to rise up? He did it anyway!

Who is running the country when an avowed socialist and an outright crook and a pathological liar are running for president of the United States and getting a huge section of the electorate to vote for them?

But what is even worse is why the American people put up with the ideologically-driven, corrupt and inept idiots WHO ARE RUNNING THIS COUNTRY and what could be the irreparable damage they have already done to it!

This is America’s reality.  ISIS is still on the move.  Refugees are still streaming into Europe and will rub out the culture of Europe forever.  Putin is re-establishing the old Soviet Union, taking over the Ukraine and rubbing our noses in it in Syria.  Obama is still president and is doing nothing.  Illegal aliens are still pouring into America and getting “free” stuff.  The VA is still a mess and ObamaCare is a money-sucking, unconstitutional travesty.  Gay marriage is now the law of the land.  The EPA is taking over all the waters of America.  The UN’s Agenda 21 is fully integrated into American law without a treaty ever being ratified.  World governments will spend trillions of the people’s money fighting nonexistent man-caused global warming.  Our public schools have become government indoctrination centers.  Entitlement spending is out of control and will eventually bankrupt the nation, if it hasn’t already.

The U. S. Congress is impotent and corrupt. Planned Parenthood is going to get its money (from us). America is essentially broke and is going to spend more, and the big-spender Democrats are still in control, even though the Republicans now control the Congress.  China is taking over the South China Sea, building a huge Navy, and still hacking our companies, our government and our military.  North Korea has a nuke and long- range missiles, and Iran is well on its way to getting both, in spite of Obama’s hopelessly flawed  “deal.”  Iran is still a major sponsor of terrorism around the planet and is about to get billions more to fund that terrorism.

The Republican Party doesn’t have any power to change anything, and the line-up of Republican presidential candidates is pretty lackluster.  And a bunch of Americans think Trump is going to make it all better, which is a naïve illusion.

What could suddenly erupt on the scene that would change any of this?  The fact is, America is a ship with an incompetent, narcissistic captain, a plane with an inexperienced, delusional pilot, a train with a sleeping engineer with his hand on the throttle set at fast forward and where most of the passengers don’t give a damn about anything but their own entertainment and self-gratification while expecting everyone else to pay for it.

For the last 10 years, in spite of the insurmountable odds, we (NARLO) is one of the groups that are trying to change “Who the Devil is Running This Damn Country.” See our “18 Basic Principles For America,” or our “Agenda 21 page, or hundreds of our conservative “ARTICLES.”

Who the Devil is Running This Damn Country Anyway? added on Sunday, October 18, 2015