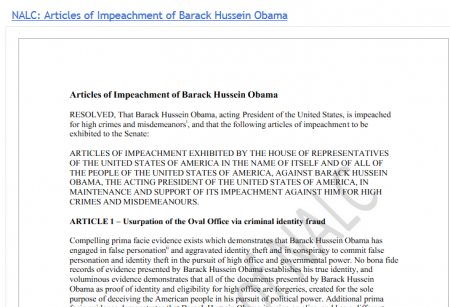 (Jul. 29, 2014) — In my previous column, I lay out exactly why the future of the Republican Party will be determined this November on the single issue of impeachment. In short, congressional Republicans have played dead for six years and unless they take a stand with the people who fund and elect them and impeach, their base will abandon them come November.

In an interview with the Chuck Wilder Show out of L.A. on July 22nd I field questions that should remove any doubts you might have about that. (July 22nd show – second hour at about 54 minutes in.)

After six years of manufactured disaster after purposeful disaster by the most impeachable administration in U.S. history, it all comes down to the Rule of Law or a totally lawless society and congressional Republicans are fast running out of time to choose a side.

As a result, the North American Law Center (NALC) has drafted the most complete and accurate set of Articles of Impeachment to date and is working with pro-American activists across the country to push House Republicans to stand up and fight for our Constitutional Republic and the Rule of Constitutional Law.

Influential Republicans Allen West, Gen. Jerry Boykin and Sarah Palin have all been pounding out the drumbeat of impeachment in recent statements and the North American Law Center is openly calling upon them and others to stand together behind a very carefully crafted set of Impeachment Articles in a joint effort to convince House Republicans to honor their oaths of office and end the assault on all things American.

NALC Lead Counsel Stephen Pidgeon explained the Articles on the July 28th Erik Rush Show. “Since House Republicans lack the courage and decency to draft proper Impeachment Articles, we did it for them. And if they need thousands of Americans to force them to do the right thing, we will try to do that too”… Pidgeon said. – “Nothing in these Articles is about the so-called “birther” issue. It’s about truth, known facts and the rule of law.”

The NALC proposed Articles of Impeachment are very straightforward and yet, complete. They are broken into three general articles as follows:

ARTICLE I – Usurpation of the Oval Office via criminal identity fraud

ARTICLE II – Malfeasance, misconduct and abuse of the Oval Office

“In his conduct of the office of President of the United States, Barack Hussein Obama – has directly engaged in the covert aiding and abetting of foreign entities via the funding, arming, training and intelligence assistance to the Muslim Brotherhood, ISIS, Al Qaeda, Hamas, the Taliban, the Palestinian Authority, Hezbollah, the Libyan Islamic Fighting Group, the Free Syrian Army and others. He has directly or indirectly through the agencies under his direct command, used American tax dollars and assets to aid and abet known enemies of the United States, including known terror organizations and organizations identified on a Terrorist List established by the United States as enemies to the United States, in Egypt, Libya, Lebanon, Syria, Pakistan, Yemen, Tunisia, Iraq, Afghanistan, Kenya, Iran, Ukraine and North, Central and South America.”

The FULL ARTICLES OF IMPEACHMENT are available HERE in pdf form, including related laws pertaining to the crimes alleged in the articles.

Despite a growing number of public calls for impeachment in an effort to stop the ongoing destruction of our Constitutional Republic and block the Obama administration from single-handedly granting amnesty to millions of illegal invaders flooding into the country by Obama’s open invitation, Republican members of the House are floating nearly a dozen lame excuses for not keeping their oaths to protect and defend the nation and uphold the Rule of Constitutional Law.

6)     Republicans can’t impeach because Obama is a usurper

7)     Republicans can’t impeach because they will be called “racists”

If you are intent on never doing the right thing, any excuse will serve a tyrant.

The list of lame excuses for why Republicans “can’t” impeach is nearly endless, just like their list of excuses for why they can’t enforce existing immigration laws, or stop unconstitutional ObamaCare, or stop Obama from aiding and abetting known foreign enemies, or even block him from appointing known terror organization members to his cabinet.

Republicans have not even forced this administration to pass one lousy federal budget in six years. So, of course they can think of a dozen reasons not to impeach, or do anything else that matters today. That’s why groups like the North American Law Center have to do it for them! — And that’s why average American citizens feel it necessary to take law enforcement into their own hands on the Southern Border.

Yet there is only one reason needed to impeach…. It’s the right thing to do!

“We hold these truths to be self-evident, that all men are created equal, that they are endowed by their Creator with certain unalienable Rights, that among these are Life, Liberty and the pursuit of Happiness.–That to secure these rights, Governments are instituted among Men, deriving their just powers from the consent of the governed, –That whenever any Form of Government becomes destructive of these ends, it is the Right of the People to alter or to abolish it, and to institute new Government, laying its foundation on such principles and organizing its powers in such form, as to them shall seem most likely to affect their Safety and Happiness.” – Declaration of Independence

The U.S. Constitution provides the peaceful and constitutional solution when bad actors find their way to power and the people must alter the government in order to protect and preserve freedom, liberty and the rule of law. It’s called impeachment…

“The President, Vice President and all Civil Officers of the United States, shall be removed from Office on Impeachment for and Conviction of, Treason, Bribery, or other high Crimes and Misdemeanors.”

Impeachment was placed in the U.S. Constitution for just the conditions we find ourselves in today. It provides a peaceful and orderly transition of power, from the hands of bad actors guilty of crimes and awaiting trial, and into the hands of those who will stop the disaster from getting any worse.

Supreme Court Justice Joseph Story (1811-1845) explained: “The offenses to which the remedy of impeachment has been and will continue to be principally applied are of a political nature… What are aptly termed political offenses, growing out of personal misconduct, or gross neglect, or usurpation, or habitual disregard of the public interests.”

James Madison explained impeachment during the debates of the Constitutional Convention of 1787: “Some provision should be made for defending the community against the incapacity, negligence, or perfidy of the chief magistrate. He might pervert his administration into a scheme of peculation or oppression. He might betray his trust to foreign powers.”

Alexander Hamilton explained in The Federalist Papers (No. 65) that “impeachment of the president should take place for offenses which proceed from the misconduct of public men, or in other words, from the abuse or violation of some public trust. They are of a nature which may with peculiar propriety be denominated political, as they relate chiefly to injuries done immediately to society itself.”

Over seventy-percent of Americans believe that the Obama Administration has abused public power and violated the public trust in so many ways that it would take a few encyclopedia volumes to chronicle it all. Half of Americans are convinced that Barack Hussein Obama is hiding his true identity and the true nature of his anti-American policies.

But as NALC Lead Counsel Stephen Pidgeon points out, “It’s not enough to impeach, it must be done correctly, in the interest of the United States and the Rule of Constitutional Law.”

When our representatives in congress lack the decency, courage and good sense to do what must be done, the buck does not stop with them. The buck stops with the American people who sit idle and allow their public servants to behave in such a cowardly self-serving manner with complete impunity.

The buck stops with the American people!

The people must stop sitting around on social networking sites whining, complaining and playing armchair political strategist focused on how elect to more politicians that they will never hold accountable after the election. It’s time; no… it’s well past the time to hold our current crop of public servants fully accountable for their actions and their fatal inactions.

It’s up to “the people” to make their representatives represent them.

It only takes one House member to place these Articles of Impeachment into the House Judiciary Committee. Make sure that YOUR House member is that ONE! Send the Articles to your House Rep HERE. All members of Congress will be on August recess as of the end of this week. Make sure they don’t have a moment’s peace and quiet in their home districts on recess.

See them while they are at home and hand-deliver the Articles to their local offices.

Make sure that every member of the House Judiciary Committee receives a copy HERE.

Also, if you are working to support a congressional challenger in the 2014 election cycle, make sure that they have a copy. If they will not openly support impeaching the most impeachable administration in U.S. history, why are you supporting their do-nothing challenge of a do-nothing incumbent?

The bottom line is that “the people” must accept personal responsibility for how their public servants behave. If you won’t do the right things, why should they and how can you even expect them to?

Impeachment is not up to them. It’s up to you!

The North American Law Center is a public policy and constitutional law division of The United States Patriots Union. They are requesting support for this action HERE.