THEN CENSORS COMMENTS ABOUT ITS COVERAGE OF OBAMA REGIME

(Jul. 29, 2014) — On Tuesday, ABC News reporter Erin Dooley wrote an article entitled “How the Tea Party Started Impeachment Talk and Democrats Co-Opted It,” which attempted to chronicle when discussion of Obama’s impeachment allegedly was launched by Republicans while at the same time, failing to discuss the reasons given for why impeachment was raised in the first place.

The mainstream media has protected Obama since 2008 when he was first running for president, failing to vet him and check the veracity of his statements.

In an interview with radio host Erik Rush on Monday, Stephen Pidgeon, the lead attorney for the North American Law Center (NALC) and author of its Articles of Impeachment of Obama released on Friday, said that major media company executives and producers were threatened with the loss of their careers or worse if they should attempt to report on the inconsistencies in Obama’s life story, and particularly the forgery of his only proffered documentation:  a short-form birth certificate, long-form birth certificate, and Selective Service registration form, all of which have been found to be fraudulent by various investigators.

The ABC article states that “conservative commentators on the fringes began toying with the idea of impeaching the president” shortly after Obama entered the Oval Office but does not state why that might have been the case so early in his first term.

ABC also reported that Speaker of the House John Boehner blamed Democrats for fueling the “impeachment” movement with the intention of using it to fundraise.

Pidgeon told Rush that the reports that members of the House of Representatives are not seeking impeachment are misleading and part of a disinformation campaign.  In 2009, Obama’s then-communications director Anita Dunn had stated proudly that the Obama campaign had “controlled the media” and the message which the American people received about Obama as a candidate.

The Post & Email left a comment below Dooley’s article asking why the news company did not ask whether or not Obama has upheld his oath to the U.S. Constitution and to protect the American people from harm.  We suggested that rather than frame events in political terms that it weigh whether or not elected officials have been true to their oaths of office.  We also asked if it had reported on NALC’s Articles of Impeachment released on Friday.

On the same day, White House senior adviser Dan Pfeiffer claimed that Boehner’s plan to file a lawsuit against Obama for his perceived violations of law and failure to uphold his oath of office could lead to impeachment.  Pfeiffer’s smiling photo appears on the page of the White House website where Obama’s long-form birth certificate forgery has been posted since April 27, 2011.

A video released in December states that in regard to the forgeries, “prosecutions are coming” and “witnesses will testify.”

The Post & Email’s comment appeared on the screen for a minute or so, then disappeared, apparently failing to survive the moderation process. 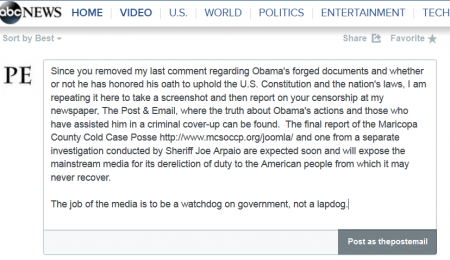 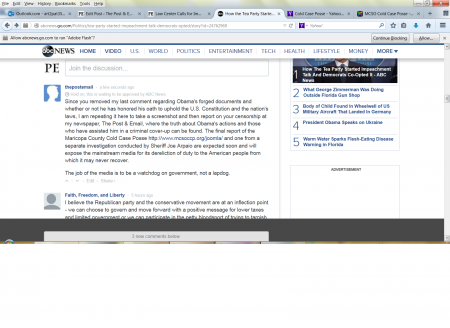 Since you removed my last comment regarding Obama’s forged documents and whether or not he has honored his oath to uphold the U.S. Constitution and the nation’s laws, I am repeating it here to take a screenshot and then report on your censorship at my newspaper, The Post & Email, where the truth about Obama’s actions and those who have assisted him in a criminal cover-up can be found. The final report of the Maricopa County Cold Case Posse http://www.mcsoccp.org/joomla/ and one from a separate investigation conducted by Sheriff Joe Arpaio are expected soon and will expose the mainstream media for its dereliction of duty to the American people from which it may never recover.

The job of the media is to be a watchdog on government, not a lapdog.