“PRESERVING THE UNION OF THE WHOLE”

(Jun. 13, 2014) — A writer for the “progressive” blog Nomadic Politics (h/t BirtherReport.com) wrote on Thursday, in refutation to a claim made by Sen. Ted Cruz that he was “an American at birth,” “Under no stretch of the imagination was Ted Cruz an American at birth, since he was born in Canada.  In fact he is a Canadian at birth and is an American by virtue of his parentage on his mother’s side.”

The writer, who uses the pen name “Nomad,” hypothesized that Cruz is preparing to run for the presidency in 2016 and is aware that his constitutional eligibility has been questioned.  Last summer, Cruz released his birth certificate indicating that he was born in Calgary, Alberta, Canada on December 22, 1970.

Canada awards citizenship to anyone born in the country, regardless of the citizenship of the parents.  Cruz’s mother was a U.S. citizen from Wilmington, DE and his father a Cuban citizen who fled the communist regime of Fidel Castro.  Rafael Cruz became a U.S. citizen in 2005 reportedly after he became a Canadian citizen for a period of years.

A letter sent to Cruz in December by the North American Law Center (NALC) asking him to declare that he is not a “natural born Citizen” because of his Cuban-citizen father did not receive a response.

CNN reported that “Most legal experts said Cruz qualifies as a “natural born citizen,” a requirement for the White House job, as stated in the Constitution.)”  However, some constitutional attorneys and scholars disagree and maintain that the person must be born inside the U.S. to two U.S.-citizen parents.   In his July 25, 1787 letter to George Washington, John Jay “hinted” that any vestige of foreign allegiance should be prohibited from entering the presidency and thereby insisted that the term “natural born Citizen” be required rather than simply the term “a Citizen.”

Some maintain that a person born to U.S.-citizen parents outside the country could be considered a “natural born Citizen” because he or she would owe no allegiance to a foreign state.

Nomad wrote that “innuendo” questioning Obama’s constitutional eligibility was responsible for driving “right wing-nuts” to foster “attacks against the president” over the last six years.  The blog contains a reference to Federalist Paper No. 68, which was authored by Alexander Hamilton using the pen name “Publius” and titled “The Mode of Electing a President.”

The Post & Email submitted a comment to Nomad’s article which indicated our agreement with him that Cruz, despite relinquishing his Canadian citizenship, is not eligible for the U.S. presidency as a “natural born Citizen.” 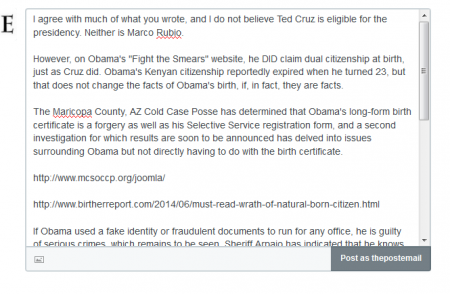 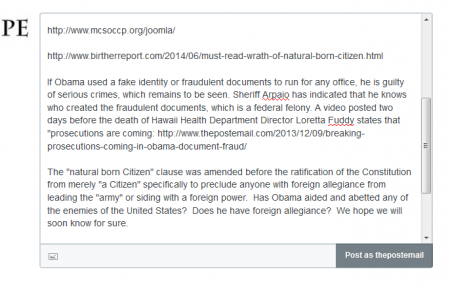 Congress has failed to investigate.

In December, The Post & Email sent a message to Nelson about a second article he wrote about the Obama birthplace and eligibility question in which he mentioned that the death of Loretta Fuddy had “reinvigorated birtherism.”

We did not receive a response to our email to Nelson. 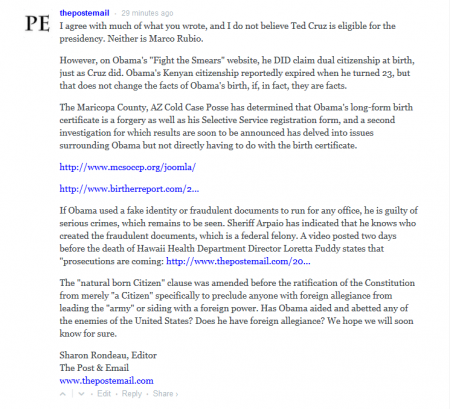 In George Washington’s “Farewell Address” given on September 19, 1796, he issued a warning to the American people to avoid “internal faction” and praised the concept of “a unity founded on necessity and prosperity.”

On that topic, Washington said:

The unity of government which constitutes you one people is also now dear to you. It is justly so, for it is a main pillar in the edifice of your real independence, the support of your tranquility at home, your peace abroad; of your safety; of your prosperity; of that very liberty which you so highly prize. But as it is easy to foresee that, from different causes and from different quarters, much pains will be taken, many artifices employed to weaken in your minds the conviction of this truth; as this is the point in your political fortress against which the batteries of internal and external enemies will be most constantly and actively (though often covertly and insidiously) directed, it is of infinite moment that you should properly estimate the immense value of your national union to your collective and individual happiness; that you should cherish a cordial, habitual, and immovable attachment to it; accustoming yourselves to think and speak of it as of the palladium of your political safety and prosperity; watching for its preservation with jealous anxiety; discountenancing whatever may suggest even a suspicion that it can in any event be abandoned; and indignantly frowning upon the first dawning of every attempt to alienate any portion of our country from the rest, or to enfeeble the sacred ties which now link together the various parts.

For this you have every inducement of sympathy and interest. Citizens, by birth or choice, of a common country, that country has a right to concentrate your affections. The name of American, which belongs to you in your national capacity, must always exalt the just pride of patriotism more than any appellation derived from local discriminations. With slight shades of difference, you have the same religion, manners, habits, and political principles. You have in a common cause fought and triumphed together; the independence and liberty you possess are the work of joint counsels, and joint efforts of common dangers, sufferings, and successes.

But these considerations, however powerfully they address themselves to your sensibility, are greatly outweighed by those which apply more immediately to your interest. Here every portion of our country finds the most commanding motives for carefully guarding and preserving the union of the whole.

At 11:33 a.m. EDT, The Post & Email received a response from Nomad, the author of the story quoted from above. 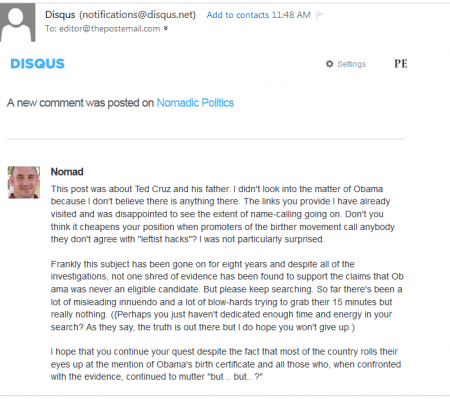 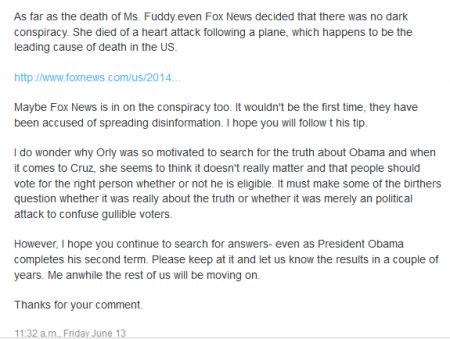 We logged back on to Nomadic Politics and then submitted the following reply: 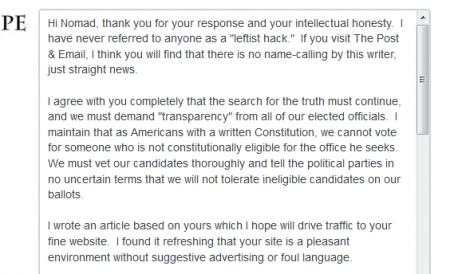 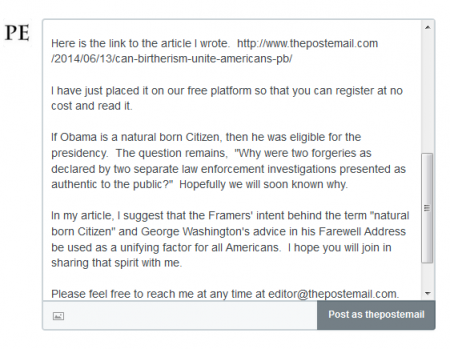 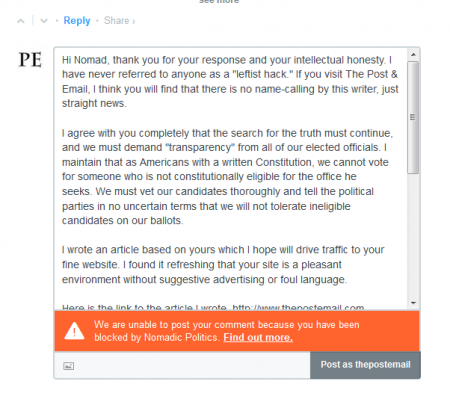 We then changed the article back to our paid platform.

Under no stretch of the imagination was Ted Cruz an American at birth, since he was born in Canada. In fact he is a Canadian at birth and is an American by virtue of his parentage on his mother’s side. – See more at: http://nomadicpolitics.blogspot.com.tr/2014/06/birtherism-reborn-candidate-ted-cruz.html#sthash.zC0pJf48.dpuf

3 Responses to "Can “Birtherism” Unite Americans?"