WHEN “HONOR AND DISTINCTION” MEANS SYMPATHIZING WITH THE ENEMY 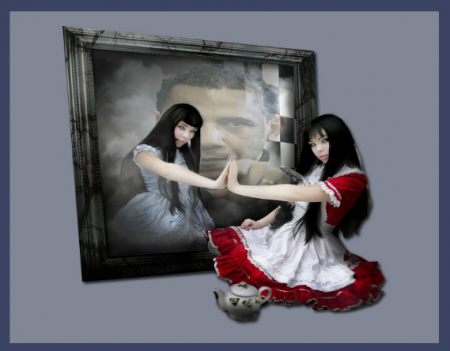 (Jun. 13, 2014) — Lewis Carroll’s sequel to Alice’s Adventures in Wonderland, Through the Looking-Glass – and What Alice Found There, bears an uncanny resemblance to life in America today where up is down and down is up.

Who can forget the iconic White Rabbit and his memorable chant: “I’m late! I’m late! For a very important date! No time to say hello, goodbye! I’m late! I’m late! I’m late!” His urgency led Alice straight down the rabbit hole that was fraught with illogical and mind-bending adventures seemingly normal in an abnormal world. To draw a modern-day comparison to the White Rabbit, one does not have to look any further than the nation’s White House. The man now occupying the Oval Office often uses urgency as a means of rushing us into unwise decisions – like Obamacare. However, those living in Wonderland had an excuse.  Many were high on smoking strange mushrooms and drinking strange concoctions – hmmm – perhaps there is an excuse for our Alice-in-Wonderland-types today who admittedly indulged in hallucinatory drugs in the past.

Illogic is one explanation for today’s news.  However, the rabbit hole we are being led down may be the path designed by those with a more sinister scenario in mind.  For example, Mr. Obama and those who serve at his pleasure, such as Susan Rice, have made the seeming illogical statement that Sgt. Bowe Bergdahl served with honor and distinction while implying that those troops who served in his company were psychopaths. We can dismiss these statements as being illogical but when perceived as the worldview of those harboring anti-America ideologies, the statements make perfect sense.  In their world, Islamic Terrorists are the heroes and American troops are the villains – or the psychopaths. While this is also indicative of those with an upside-down worldview; it is also indicative of those who call evil good and good evil.  These personalities are more than just confused; they are despicable and a danger to those who live under their authority. The Bible has something to say to them: “Woe unto them that call evil good, and good evil; that put darkness for light, and light for darkness; that put bitter for sweet, and sweet for bitter!” Isa 5:20. “Woe” to those in leadership positions should not be taken lightly. As was the case with King David, who sinned with Bathsheba, the “woes” that deservingly fell upon him as a result of his sin also fell upon the whole nation of Israel.

The definitions of the words Susan Rice uttered bring clarity to understanding the worldview of Ms. Rice and to those that share her ideology.

Psychopath: A person with an antisocial personality disorder, manifested in aggressive, perverted, criminal, or amoral behavior without empathy or remorse

Honorable: A person with a high position, worthy of respect or with high morals

Distinction: An honor given to someone who has achieved a very high standard in their work or who has helped many people, an unusual achievement or feature that makes someone or something different from other people or things.

So, Susan Rice, on behalf of this Administration, is saying that Bowe Bergdahl, who deserted his command in search of the Taliban, with which he sympathized, is someone with high morals and worthy of respect and honor because he has achieved a very high standard in his work and/or in the process has helped many people through an unusual achievement that makes him different from other people or things.  This is not an illogical statement if Ms. Rice and the Administration she represents are also Taliban sympathizers.  This revealing worldview is supported by further statements made by representatives of the Administration who categorize our fine men and women serving in harm’s way as possible “psychopaths.” According to the definition, they are saying that our troops possess antisocial personality disorders that are manifested in aggressive, perverted, criminal, or amoral behavior without empathy or remorse. My problem in accepting their rhetoric is that I can’t seem to remember a time when these supposed psychopaths blew up buildings with thousands of innocent civilians, or beheaded anyone on television, or persecuted and vilified women who had been raped.  I must have missed something somewhere because I seem to remember that behavior being manifested in other extremist groups that force their women to wear burqas and strap bombs onto their children.

To be clear, I believe that Bowe Bergdahl deserves his day in court, but the circumstances seem to indicate that at the very least, he is a deserter – and that does not make him honorable or distinctive from a patriotic point of view – only from a Taliban sympathizer point of view.  At the very best, Bergdahl is a habitual whiner – first whining about the Americans, whom he deserted, and then whining about the Taliban, whom he joined and tried to escape from – ending up in a cage.  Perhaps he found out that they weren’t the Sunday school boys he thought, or perhaps he just is a perpetual whiner.

We are right to be outraged by such statements, but we would be better off being wise and understanding why these statements were made.  It will take wise and committed patriots to reclaim the nation that has been ravaged by anti-American Taliban/Muslim Brotherhood sympathizers.  Wisdom will also require that we not continue down the rabbit hole we have been led down and continue in our delusion that somehow Tweedle-dee and Tweedle-dum (otherwise known as our House of Representatives and our Senate) can be relied on to do anything but argue. We must also realize that a fictional cavalry will not ride in and rescue us from the dilemma of our own making.

Therefore, it will take the patriots of this nation who can think further than the nose on their own face to put down their remote controls long enough to see what is happening in the real world.  If they don’t, they are as guilty as the White Rabbit in condemning us to stay imprisoned in this rabbit hole that will absorb all vestiges of what is left of our freedoms.  It will take more than complaining or wishful thinking to get us out of this all-consuming prison; it will take a strong dose of reality mixed with vigilance, commitment, and a whole lot of prayer to get us back on solid ground.  Then maybe God will once again have mercy on America.  If not, start preparing for the worst.