THE WORK OF OBAMA OPERATIVES? 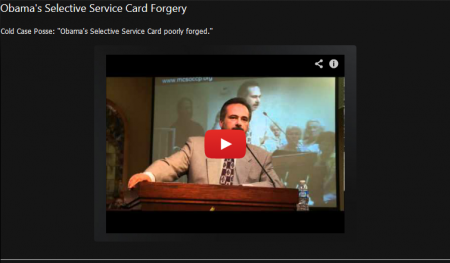 A link in the story leads to a March 28 article titled “Joe Arpaio Conference Live Streaming Now – Video.”  The opening paragraph reads, “I suspect an underhand [sic] trick by Arpaio. I think he’s getting his Cold Case Posse facts leaked by these other guys: the Hagmanns. They’re maybe making Arpaio’s press conference this weekend for him so as to keep Arpaio’s powder dry. He wants to keep out of the media fray and so he can preserve himself from flak and the bad repercussions.”

The reference to “the Hagmanns” is an apparent one to the writer for Canada Free Press (CFP) Douglas Hagmann, who hosts a radio show with his son Joe through the The Northeast Intelligence Network.

Maricopa County, AZ Sheriff Joe Arpaio is expected to make a significant announcement as to the conclusions of a criminal investigation launched as a result of an initial investigation carried out by the Maricopa County Cold Case Posse into Obama’s long-form birth certificate and Selective Service registration form, both of which were concluded to be “computer-generated forgeries” more than two years ago.

Directly below the first paragraph of the article titled “Joe Arpaio Conference Live Streaming Now” is a link taking the reader to an alleged “conference” roster bearing the dates March 28-30 under the banner “Orlando Prophecy Summit.” Hagmann’s name is not listed as a speaker, nor does he reference giving a presentation during that time frame on his website.  The host of the summit, one Bill Salus, has a working relationship with Hagmann, but there is no reference to their appearing together this weekend.

Another link at the BIN story leads to an audio wherein a speaker identifying himself as Hagmann says that he is “broadcasting live from Orlando” on March 27, 2014.  He says at the 30-second mark here (an excerpt of the longer audio at BIN) that “There will be some breaking news – at least, I believe it’s breaking – with respect to the connections that exist [between] Barack Hussein Obama; Abercrombie, the governor of Hawaii; Loretta Fuddy, who died in a plane crash; Obama’s mother…and I believe this to be the golden thread, the…well, the issue that connects all of the events that we’ve been seeing take place…over the last decade or so…” and then references the religious belief system “Subud.”  “We’ve uncovered some dramatic – I would say, earth-shaking [inaudible], that involve Barack Hussein Obama himself, his mother, Loretta Fuddy…” Hagmann said.

The same statement begins at the 4:22 mark in the BIN version, which lasts more than three hours.

Approximately two months ago, an article in The American Thinker posited that there could be connections among Barack Hussein Obama, the late Hawaii Health Department Director Loretta Fuddy, and the name purportedly given to Obama by his alleged mother, Stanley Ann Dunham, on one of her passport applications which read simply “Soebarkah,” through Subud.  Fuddy, who reportedly died in December as the result of a water landing by the small airplane in which she and others were traveling on business, is the person who reportedly oversaw the copying of Barack Obama’s long-form birth certificate which was posted on April 27, 2011 on the White House website.  Fuddy was also a member of the “Subud” movement, having been a state coordinator and active member for more than a decade prior to her death.

Abercrombie was elected governor of Hawaii in 2010 and appointed Fuddy to the directorship of the health department just after he was reportedly unable to locate Obama’s original birth certificate himself.  He and other Hawaii officials are identified as having apparent involvement or knowledge of the Obama birth certificate forgery and cover-up in a video*

recently produced by WheresObamasBirthCertificate (WOBC) and others.

In a February 28, 2014 CFP article, Hagmann reported that a source within the Department of Homeland Security had told him that there existed a group of “‘cyber warriors’ working for the regime of Barack Hussein Obama.” On February 3, Cold Case Posse lead investigator Mike Zullo stated on Carl Gallups’ “Freedom Friday” radio show that a second investigation had been launched by Arpaio with resources allocated to the sheriff’s office, including detectives, and had determined that several internet operatives for the Obama regime are employed by DARPA, a division of the Department of Defense.  DARPA develops robotics, psychological operations, and other strategies under the mantle of the defense of the nation.

Zullo suggested that the Obama operatives, known to some as “Obots,” have planted propaganda particularly focusing on attempting to “debunk” the posse’s work on the birth certificate image.  “Everything they do is to draw you in,” Zullo said.

In his articles and radio shows, Hagmann has discussed the topics of rising totalitarianism, international finance, food storage and survival skills, and Christianity.

During the broadcast, Hagmann says that the information he has gathered has not been covered by either the mainstream or “alternative” media.  He references being “down here” conducting interviews and collecting information which is “being prepared for publication, for revelation.”  At 6:05, he says that “PPSimmons” has mentioned that which he has been researching. At 10:30, Hagmann states that his research “does overlap, dovetail or some ways, at its periphery, also involve the Arpaio Cold Case posse investigation – at least the same players are involved.”

Below the complete Hagmann audio at BIN, it is stated that “His information is whatever Joe Arpaio has to reveal.”  Contrary to the statement “Doug Hagmann says he’ll be revealing all his investigation during the three days-conference this weekend to all the speakers and public there,” Hagmann actually states on the broadcast that while in Florida, he will be gathering information to prepare for publication at an unidentified time.  Later in the audio, Hagmann references attending the “Prophecy” conference over a three-day period, then changes the subject to the crisis in the Ukraine and “disintegration of the integration that is taking place,” a “monetary collapse,” and “a world war.”

Finally, Hagmann says that he will be in Orlando “supporting the conference” and “the speakers.”  While the timer stopped functioning, Hagmann then plays a pre-recorded interview with author and radio host Gregg Jackson.

Later, Hagmann says that he will be revealing how “We have been set up” after again referencing the work of the Arpaio investigation, although not denigratingly.  “We have the documentation, I believe,” Hagmann says.

There is no identified author of the BIN article.

The Post & Email contacted Zullo about the BeforeItsNews articles, to which he responded, “When the time is decided upon by Sheriff Arpaio to release our information, I personally will put out a public statement. If you don’t hear it from me it isn’t true.”

*Editor’s Note:  The “Universe Shattering” Promo released on March 26th, 2014 was written and produced by Pixel Patriot for WheresObamasBirthCertificate.com. Mike Volin presented the concept for the video to Pixel Patriot as a means to inform the American public about the Sheriff’s Kit. The video is free for distribution for non-commercial use.

Exclusive: Mike Zullo on Obama Investigation: “If You Don’t Hear it From Me, It Isn’t True” added on Sunday, March 30, 2014

5 Responses to "Exclusive: Mike Zullo on Obama Investigation: “If You Don’t Hear it From Me, It Isn’t True”"