Liberals Will Always Have the Upper Hand!

TAKING YOUR MONEY TO ENSLAVE EVERYONE 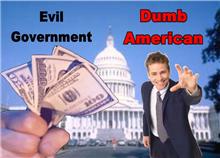 “I am for doing good to the poor, but I differ in opinion of the means. I think the best way of doing good to the poor, is not making them easy in poverty, but leading or driving them out of it. In my youth I traveled much, and I observed in different countries, that the more public provisions were made for the poor, the less they provided for themselves, and of course became poorer. And, on the contrary, the less was done for them, the more they did for themselves, and became richer.” – Ben Franklin

It should come as no surprise to anyone with even a modicum of intelligence that liberals have the upper hand and we gave it to them of our own volition.  You see, they bought off almost every segment of the American society with handouts from your money and they have been doing it for over eight decades.

It’s quite simple, really.  All the progressive/liberals have to do is to use all the people they bought off with your money against you.  First, they complicated the system by instituting an income tax and turned it into a very complicated wealth redistribution scheme.  Have you done your income tax return lately?  Did you enjoy it?

When it comes time to trim government spending, we’re all for it…that is, provided the trimming happens to the “other” guy and not us.  Now, the Republicans, having listened to a small portion of the American people, those who still believe in self-reliance, responsibility and liberty, want to trim government way back.  Representative Paul Ryan just released a $6.2 trillion budget with cutbacks over the next 10 years that does just that.  What an easy target.  The liberals only have to trot out their usual playbook of “6 million seniors are going to die” and “kids will go hungry” (Nancy Pelosi’s words) and Republicans will look like they had just guillotined an entire nation.  Then the liberals will resort to the most compelling of all arguments, class warfare, and will accuse the Republicans of pandering to the rich.  It works every time.  The left-wing press will be only too eager to jump on the bandwagon and accuse the Republicans of being baby-killers.

Never mind that 25% of the top taxpayers pay 87% of all taxes.  You call that equal treatment under the law?  Hell, no!  That’s just plain wealth redistribution in its purest form so that politicians can buy votes with money they didn’t earn or possess and they do it under the “color” of law.  It’s a grand heist by any definition.

How can the Republicans and conservative Americans fight back against this onslaught?  They can’t and will always be on the losing side of small government, less taxes and less regulation.  It makes no difference that the country is going broke.  Those getting a government handout don’t care.  Those politicians pandering to those getting a handout don’t care because those moochers will vote for the enabler politicians every time.  That was the plan since FDR Invented Social Security and it still is the liberal plan today.

The liberal plan is multifaceted: propaganda at all levels, including public education, buying off as many constituents as they can to gain loyalty and votes and to lie about their entire agenda.   They have been very successful and we, like the dupes we are, fell into their trap with the naiveté of a jungle savage.  If there is anyone to blame for this mess, it is us.  Government just baited the trap, as all governments since the dawn of human civilization have done.

The only actions that will save a free and prosperous America fall under three categories:

1.  The American people will wise up en masse and start electing small-government politicians that still believe in their oath of office to preserve, protect and defend the constitution, so help them God!  (Don’t hold your breath.)

2.  America will finally run out of other people’s money to redistribute (just like Europe), and the American financial system will collapse under overwhelming debt and fall into bankruptcy and chaos.  The moochers will riot and there will blood in the streets, like government union members are doing wherever and whenever government tries to trim back spending on public union salaries and pensions that are busting government budgets.  In the end, as the chaos increases, the government will declare martial law and suspend the constitution.  Where it goes from there will probably be ultimately fascism.  “Heil,  Obama!”

3.  Or, the blood of our forefathers will rise to the surface and we will take back our government by force as we shed an oppressive government 235 years ago, reinstitute constitutional law, trim government, trim regulations and let the free markets and capitalism restore America’s wealth and pride to what it was designed to be under freedom.  But that action is plagued by any number of unintentional consequences that could backfire.

Out of the three choices, none appears very promising, much less likely.

But, hey!  We are but one small voice in a multitude of voices calling for the restoration of our Constitutional Republic.  Our message is lost in the hopeless din of patriots screaming for redress to a bought-off audience that gives that message little credence.  Liberals will always have the upper hand because they paid for it with your money.  Until they are starved of the fuel that gives them their energy and power… your money, they will continue to maintain the upper hand.

As we have stated many times in past articles:

But then, hey, who’s listening?  Certainly not liberals and certainly not a press which sleeps with the enemy of freedom!

Liberals Will Always Have the Upper Hand! added on Thursday, April 7, 2011

4 Responses to "Liberals Will Always Have the Upper Hand!"