DOES CONGRESS PLAY A ROLE? 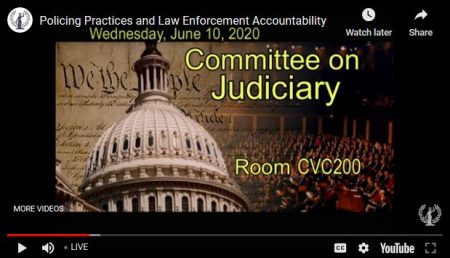 (Jun. 10, 2020) — A 10:00 a.m. hearing on “Policing Practices and Law Enforcement Accountability” by the House Judiciary Committee began Wednesday morning with Chairman Jerrold Nadler stating that African-Americans have historically had reason to fear encounters with the police and that “activists” who drew attention to the problem have not been heeded.

The hearing was scheduled in the wake of the May 25 death of Minneapolis resident George Floyd while he was in the custody of four officers of the Minneapolis Police Department.

Three of the officers are white and one of Asian descent; all were fired, with the officer who placed his knee on the back of Floyd’s neck for nearly nine minutes, Derek Chauvin, charged with second-degree murder and third-degree manslaughter.

The remaining three have been charged with “aiding and abetting,” although one has left the state, the Star-Tribune reported on May 30.

Also on Tuesday, President Trump held a roundtable discussion about policing, including responding against recent calls in Minneapolis and other locations to “defund the police.”

Some have advocated abolishing police “chokeholds” on suspects, while others, including Bongino, say there is a legitimate use of the measure by those trained in self-defense who find themselves in mortal danger.

Following Nadler’s opening statement, ranking member Jim Jordan (R-OH4) spoke, equating both the deaths of Floyd and federal protective service officer David Patrick Underwood, whose sister Angela is to serve as a witness, as “a tragedy.”  A California native, Underwood was killed in Oakland after rioting and lawlessness broke out in the aftermath of initial peaceful protests in Minneapolis and dozens of locales throughout the nation.