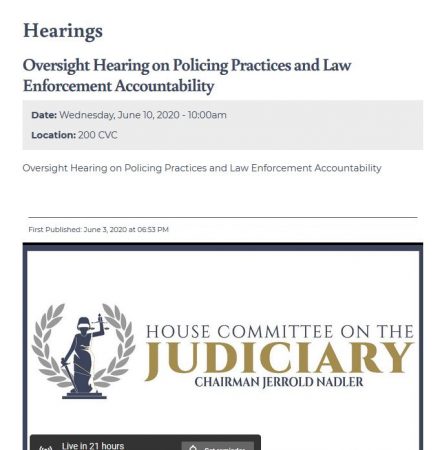 (Jun. 9, 2020) — On his radio show Tuesday, host, former NYPD officer and former Secret Service agent Dan Bongino spoke about recent calls in some communities to “defund the police” and the meaning of the terms “no-knock warrant” and “carotid restraint.”

The name of the episode is “Stand up for the Truth.”

As this writer listened to the podcast, Fox News Capitol Hill producer Chad Pergram tweeted that he could confirm Bongino will be a witness at the House Judiciary Committee hearing Wednesday morning on the topic of “Policing Practices and Law Enforcement Accountability.”

The House Judiciary Committee website does not yet list the witnesses who will appear at Wednesday’s hearing.  However, at the opening of the show, Bongino said he had a “big update on what may happen tomorrow” with the suggestion of more elaboration later in the show.

In discussing the use of police “chokeholds,” which some jurisdictions are considering abolishing by policy, Bongino said that while an untrained individual should not attempt a “carotid restraint” or “chokehold,” the latter can prove life-saving to a person who has been attacked by a criminal and whose life is threatened.

Of the carotid restraint, Bongino said, “It is a very effective way of stopping someone trying to kill you from actually killing you if you’re on the street…” which should not be restricted by policy-makers.

The uproar over local policing techniques arose on May 25 as cellphone video of Minneapolis resident George Floyd lying in the street with an officer’s knee pressing on his neck went viral.

Floyd lost his life as then-MPD Officer Derek Chauvin continued the pressure for nearly nine minutes, during which three other officers did little to intervene as Floyd gasped, “I can’t breathe.”

All four officers are now in custody, with Chauvin charged with second-degree murder and third-degree manslaughter.

Later in the show, Bongino said that many police departments expect “quotas” to be met each month by patrol officers, which can lead to “policing for profit.”

At 4:35 in the show, Bongino admitted that current questioning over policing practices constitute a “national crisis.”

“No-knock warrants,” he said, are “issued in the limited scenario…where the person you’re arresting is a known violent felon…You have to actually produce evidence the person could be violent.”  Banning them entirely, Bongino said, would be a mistake.

He referred more than once to what he believes was an outstanding monologue by Fox News’s Tucker Carlson.