HOW “REGIONAL” IS THE PLAN? 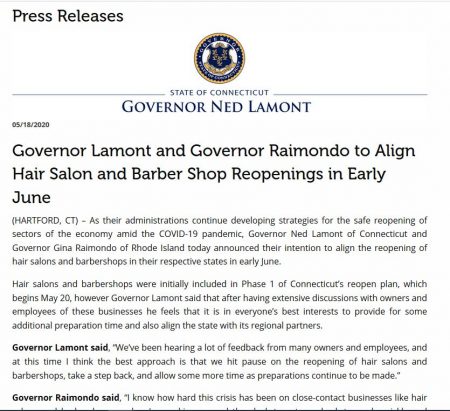 (May 18, 2020) — After including hairdressers and barberships in the initial phase of Connecticut’s coronavirus “reopen” plan, on Monday Gov. Ned Lamont (D) reversed course on that industry, declaring that their return to business would be delayed until “early June.”

The move was made, the press release said, because Lamont “feels that it is in everyone’s best interests to provide for some additional preparation time and also align the state with its regional partners.”

On March 16, Lamont, Cuomo and Murphy collaborated in a “regional” approach to direct the shuttering of bars, restaurants, movie theaters, gyms and fitness centers as of 8:00 p.m. that day.  Likewise, Raimondo ordered all dine-in restaurants and hair professionals closed for two weeks, with drive-through and pickup food orders allowed.  Raimondo was quoted as having said at the time, “Eating out is not essential. Getting your hair done is not essential. This is an order, this is not a suggestion.”

In contrast, Lamont did not shut down construction or manufacturing during the public-health emergency he announced on March 10.

Rhode Island’s reopening, announced April 27, launched “Phase 1” on May 9 and included “Manufacturing, construction, and service-based businesses,” “critical retail” and “non-critical retail.”  As of this writing, the four-stage plan does not include start dates or industries contemplated for the subsequent three stages.

Retailers have yet to open in Connecticut when Phase 1 launches on Wednesday.

New York Forward does not state a date for the second phase of its reopening, which is expected to include “Retail,” “Administrative Services,” and “Professional Services” as well as real estate.

Connecticut did not shut down real estate.

Last week, Lamont indicated that Connecticut’s second reopen phase would begin on June 20, one month after the start of Phase 1.  On May 13, the Connecticut Restaurant Association (CRA) and state 130 business leaders asked Lamont for a restoration of dine-in services on June 3 rather than June 20, which Lamont indicated in a press conference to be his target date.

Restaurants in New York will not open until the launch of “Phase Three.”

Connecticut continues to see hundreds of new COVID-19 cases and dozens of deaths attributed to the disease each day but has had declining hospitalizations for more than three weeks.  The total number of fatalities from the virus is reported at 3,449 as of Monday.