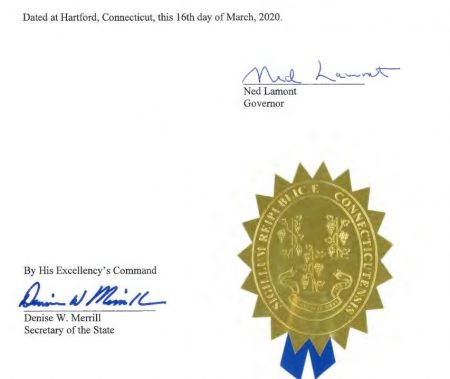 (Mar. 16, 2020) — Following a number of executive actions over the weekend, Connecticut Gov. Ned Lamont (D) joined the governors of New York and New Jersey in a “regional” approach to fighting the coronavirus consisting of ordering bars, restaurants, movie theaters, gyms and fitness centers to close at 8:00 p.m. Monday.

The order was issued with the purpose of enhancing “social distancing” through April 30 in an effort to contain the potentially deadly virus, which arose in China late last year and is now a pandemic claiming more than 7,000 lives.

Eating establishments may remain open to provide “off-premises” service only, Lamont’s order states.  Bars may not prepare alcohol for takeout, and off-track betting facilities must also close by 8:00 p.m. Monday.

On Sunday, Lamont ordered all Connecticut public schools closed effective Tuesday; placed restrictions on visitors to psychiatric facilities; allowed for flexible deadlines for town officials to submit their budgets to the state and for the Department of Motor Vehicles (DMV) to close certain branch offices. Religious and other types of gatherings were restricted to no more than 50 people, in keeping with CDC guidelines, through April 30.

At a White House press conference earlier on Monday, President Trump and the Coronavirus Task Force issued a new recommendation reducing gatherings to fewer than ten people for the next 15 days to further stop the spread of the virus.

On March 10, Lamont declared a public health emergency after residents in the state began testing “positive” for coronavirus.  As of Monday at 5:00 p.m., Connecticut has 41 total coronavirus cases Lamont said, all arising west of the Connecticut River close to the border with New York State.

On Friday, Connecticut’s public utility agency, PURA, agreed to a “moratorium” on electricity shutoffs for non-payment, and on Monday, the Connecticut Water Company issued a notice stating that it will observe the same policy during the coronavirus crisis.

In New Jersey, Gov. Phil Murphy (D) issued an executive order Monday which begins, “Governor Phil Murphy today signed Executive Order No. 104, implementing aggressive social distancing measures to mitigate further spread of COVID-19 in New Jersey. Among the directives, Governor Murphy’s Executive Order indefinitely closes all public and private preschool, elementary and secondary schools, and institutions of higher education, as well as closes all casinos, racetracks, gyms, movie theaters, and performing arts centers. The order also mandates that all non-essential retail, recreational, and entertainment businesses must cease daily operations from 8:00 p.m. to 5:00 a.m. All restaurant establishments, with or without a liquor license, are limited to offering only delivery and/or take out-services only, both during daytime hours and after 8 pm.”

Murphy’s order does not contain a proposed end date for the new restrictions, which include the closures of “concert venues” and “performing arts centers.”  He has also imposed a “voluntary curfew,” according to northjersey.com, requiring all residents to stay inside between 8:00 p.m. and 5:00 a.m. “with the exception of essential travel.”

Murphy is seeking to identify facilities which might be converted to medical use and has mobilized the National Guard to carry out the search.

As of Monday at 3:00 p.m., New York State reported a total of 950 confirmed cases of coronavirus, which includes two lawmakers.  There have been two deaths in New York City, which accounts for 463 of the state’s confirmed cases.

On Monday Cuomo ordered all public schools in New York City closed and schools elsewhere in the state closed Wednesday for a minimum of two weeks. Both Cuomo and New York City Mayor Bill deBlasio are concerned that if the coronavirus reaches epidemic proportions, the existing hospital system will be overwhelmed.

The two denied that a citywide quarantine, such as what was enacted last week in New Rochelle, is under consideration.

According to The Connecticut Mirror, the three governors coordinated their new responses to the coronavirus threat “to keep people from crossing state lines to patronize businesses that typically draw large crowds.”  Politico quoted Cuomo as having said, “We have agreed to a common set of rules that will pertain in all of our states. So don’t even think about going to a neighboring state because there’s going to be a different set of conditions. I believe we are the only region in the country that has done this.”