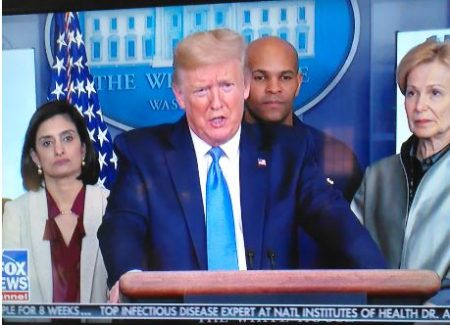 (Mar. 16, 2020) — New guidance issued at a Monday-afternoon White House presser advises Americans not to congregate in groups larger than ten, as opposed to no more than 50 people recommended by the CDC as of Sunday.

“Social-distancing” has become a new term in the American lexicon since the domestic emergence of the coronavirus, which began in Wuhan, China in December or possibly earlier.

“We need to appeal to every single American,” Dr. Deborah Birx, infectious-disease specialist, said.  She said that distance between people is the goal for the immediate future.

The time frame for the new guidance is a preliminary 15 days, after which the situation will be re-evaluated, with the goal of reducing the spread of the virus.  “We’re calling upon every American to do your part,” Vice President Mike Pence said.

Trump suggested that the new guidance on larger gatherings and other changes to daily life might be in place through “July or August” but that that time frame is not firm.  “We are making recommendations,” Trump said, rather than issuing edicts for restaurants and other places which serve the public to close.

Pence reported a “very productive” conference call with governors Monday morning.  Pence was appointed by President Trump to lead the White House Coronavirus Task Force, of which Birx is a member.

Birx said that the millennial generation could be key in preventing the spread of the disease given its higher likelihood of socializing in groups and extensive use of social-media platforms.

Trump acknowledged that because of the U.S. outbreak of the disease last month, the economy could be facing a recession.  The stock market, at record highs a month ago, has plunged several times over the last week, including at Monday morning’s opening.  However, later in the presser, Trump said that “the market will take care of itself” after the virus is vanquished.

The Task Force has been holding daily briefings, including over the past weekend, on the progress the federal government is making on testing, which emergency legislation passed by Congress extends to all Americans at no cost or co-pay.

The administration is not calling for a national curfew at this time, Trump said, as has been recently rumored online.

NIAID Director Dr. Anthony S. Fauci said that the first clinical trial of “45 normal individuals” was launched today in Seattle, WA, an area particularly hard-hit by the coronavirus. Fauci said that the accomplishment constitutes “a record” after only “65 days.”  He said that although today’s recommendations might seem severe, they are necessary to stop the spread of the virus.