“WE’RE MUCH STRONGER TOGETHER”

(May 3, 2020) — Beginning just after noon on Sunday, New York Gov. Andrew Cuomo spoke in a press conference about the state’s “hospital system” as opposed to a “public health system” and whether or not private and public hospitals are well-integrated into a one cohesive system.

He said that hospitals run by New York City and private hospitals had never coordinated the sharing of medical equipment and supplies.  Now, he said, “every hospital has to have a 90-day supply” of personal protective equipment (PPE) to address any future healthcare crisis.

“As a nation, we can’t go through this again,” he said of what he alleged was “competition between states” for the much-needed supplies as the coronavirus pandemic unfolded.

New York was the hardest-hit state in the nation by the virus, which Cuomo explained is believed to have arrived on the East Coast from European countries such as Italy.

Cuomo said New York ultimately received “some of the masks that a private airplane had picked up” and that states and the federal government should not have been competing for PPE.  “Let’s fix that,” he said.

Going forward, he said, New York will continue to work as part of “the consortium” of Northeast states to acquire PPE.  “Let’s see if we can’t do the purchasing in the country,” he said, rather than “in China,” and expressed a desire to work with the “neighboring states.”

He praised New Jersey Gov. Phil Murphy and Connecticut Gov. Ned Lamont for their helpfulness during the pandemic.  “It was really a beautiful, generous way of operating that was an inspiration to me,” Cuomo said at 12:25.

Cuomo then introduced other “consortium” governors, some of whom joined him by video.  They included Murphy, Lamont, Pennsylvania Gov. Tom Wolf, and Delaware Gov. John Carney.  Member governors who did not join but were mentioned by Cuomo are Massachusetts Gov. Charlie Baker and Rhode Island Gov. Gina Raimondo.

All are Democrats except Baker.

Murphy said that a “regional council” has been formed by the Northeastern governors on a “reopening” strategy as well as to acquire PPE.

“We’re much stronger together,” said Lamont following Murphy’s remarks, and that coordinating their efforts will give them the opportunity to “control our own destiny.”

Wolf agreed that the consortium states’ joint efforts have enabled each to obtain necessary equipment and supplies as well as to increase their residents’ ability to access testing. 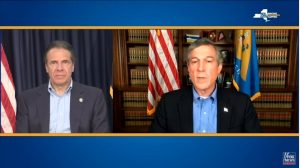 As for the prospect of Delaware competing with New York for PPE, Carney said New York would prevail.

As per a slide accompanying Cuomo’s remarks after Carney finished, the group of states have formed a “Regional Statewide Purchasing Consortium.”

Cuomo said that “government” is needed now more than ever.  “Every person has a part in this…,” he said, which is to “act responsibly and intelligently” to avoid “getting sick.” That will avoid the overburdening of the medical system and specifically, healthcare workers, he said.

“Wear a mask and socially distance.  That is your social responsibility in the middle of this overall pandemic,” he said.

“Density is the enemy here,” Cuomo responded to the first question of the day in regard to New York City.  “Nobody knew; nobody ever talked about transmission through Europe.”

He said that the arrival of warmer weather, residents’ desire to “get out of the house” and falling hospitalization numbers could lead to a relaxation of social-distancing and other mitigation efforts. He cautioned that “the numbers will go right back up again” if the public does not continue its vigilance.

“Be responsible and show respect,” he said.  “That’s a basic, common decency in this situation.”

At 12:56, Cuomo condemned “dependence on China for PPE.”  He questioned why New England Patriots owner Robert Kraft “had to send a private plane” to China to “pick up some masks” “in the middle of a pandemic.”

“Consortium” Governors Join Cuomo for Presser added on Sunday, May 3, 2020