WE ARE DEALING WITH A SPIRITUAL WAR 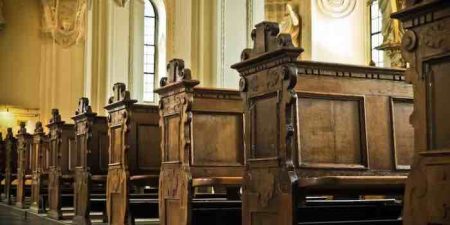 Have any of you stopped and asked yourself why churches are closed and grocery stores remain open?

Granted, we need food to sustain us, but how can a government justify keeping grocery stores open, with people passing, or bumping into one another along narrow aisles, but cannot figure out a system that would allow churches to open, with parishioners spread six feet apart, where we would receive equally important sustenance from our faith in God, especially during this upcoming holiest week in the Christian Church.

Do you really want to know the real reason why the churches are closed?

Why would the government not allow us to develop a system where church-goers could sit six feet apart in the pews, or hold services outside the church, with a public address system, so that parishioners can stand (or sit in their own chairs or cars) with a format of proper “social distancing” set by the ushers?

Do you really want to know the real reason why the churches are closed?

The answer came to me while watching an interview by Greg Hunter with former Assistant Secretary of Housing & Urban Development Catherine Austin Fitts. The full interview is here:

“Part of what is happening is we are dealing with a spiritual war, and there are serious demonic and occult forces at work.” said Catherine Austin Fitts during the interview.

She then went on to say, “There is nothing they [the government] would love more than to stop the churches and stop people from getting together and praying and inviting in the divine and angelic hope every Sunday. I am with the President. I think stopping the churches from gathering is a very, very terrible idea.”

Let’s talk a minute about Governor of New York Andrew Cuomo. Have you seen images of the standing-room-only in a typical NYC subway car? There is certainly no 6’ social distancing requirement being enforced in these subways. Why do they continue to operate under these circumstances? Simple.  If Cuomo or Mayor de Blasio shut down the transit system in New York City, the people would take to the streets and burn the entire city down, and they know it.

Andrew Cuomo and Phil Murphy of New Jersey are control-obsessed socialists and prime examples of the aforementioned serious demonic and occult forces at work. They may well have (highly-suspect, but unverified at this time) been initially responsible for closing all the churches by hypothetically telling Cardinal Dolan, or the head of their local diocese, to close their churches or lose their 501(c)(3) tax exemption. We are witnessing an in-your-face spiritual war of the first order and it must be stopped. Now!

Pray to God that the Church comes to its senses prior to next Sunday which, as you know, is Easter, by allowing all church services to be held 6 ft. apart inside the church or outside with a public address system.

Pray to God that He will stop the madness of these evil forces from controlling our spiritual lives any longer.