“WE WILL BE STRONGER THAN EVER” 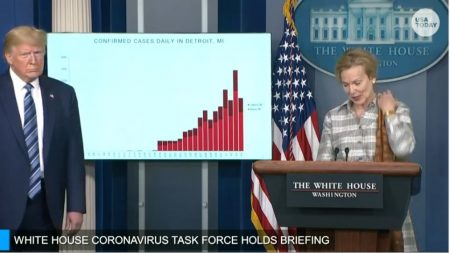 Trump expressed his solidarity with the states of New York and New Jersey, which are experiencing the highest number of coronavirus infections and deaths.  However, he said that the number of hospitalizations is beginning to level off.

He reiterated that the Javits Center in New York City, now converted to a hospital, will be staffed by military medical personnel.  “As of Tuesday, we’ll have deployed more than 3,000” to New York, New Jersey and parts of Connecticut, Trump said.

FEMA has been transporting supplies within the country and from other countries, Trump said, including “300,000,000 gloves.”  “Three big” cargo planes arrived on Sunday from Asia, Trump said.  On Monday, more medical supplies will be delivered to New York City, whose mayor, Bill de Blasio, Trump complimented on his leadership.

Five hundred ventilators have been sent to New Jersey, Trump reported, and 200 to the “hot spot” of Louisiana.  He said that Gov. Pritzker of Illinois is “always complaining” despite a number of large endeavors undertaken there by the federal government, Trump said.  “He has not performed well,” he said of Pritzker.

Illinois will receive 600 ventilators in the near future, he said.

Washington State Gov. Jay Inslee has sent 400 ventilators he judged are no longer needed to places in need, Trump said.

He complimented the “incredible doctors and nurses” and other healthcare professionals, stating that they have “made us proud.”

Testing results for 1.6 million have been realized to date, Trump said, and new “rapid” testing kits are set to be distributed on Tuesday made by Abbott Laboratories.

“We’re working with the states in almost all instances,” he said.

He again said that hydroxychloroquine, which is approved for use for malaria and lupus, “is being tested” on coronavirus patients and that azithromycin “will kill certain things that you don’t want living within your body,” touting the combination as a possible beneficial treatment regimen.

“What do you have to lose?” Trump asked rhetorically, as he had on Saturday.  “If it does work, it would be a shame if we didn’t do it early,” he commented.  “Again, you have to go through your medical people; get the approval…I’m not a doctor, but I have common sense.  The FDA feels good about it, and the reason because it’s been out there for a long time…we have it stockpiled, about 29 million doses…We hope it works…We’re driven by the goal of getting rid of this plague…these brilliant minds are working on the most effective anti-viral therapies and vaccines…” Trump expounded.

“We are very far down the road on vaccines,” he added.

As to the economy, Trump restated the aspects of the CARES Act, which is providing loans for small-business owners to retain their employees.  “Direct cash payments” will be sent to individuals and “industries” will also receive assistance, he said.  “We’re going to take care of our large businesses” which were “doing better than ever” before the pandemic reached the U.S., Trump said.

“We see light at the end of the tunnel; things are happening,” he said.  “You can never be happy when so many people are dying, but we’re going to be proud of the job we did.”

He also noted that today is Palm Sunday, a holy day in the Christian calendar in preparation for Easter.  “We may be apart; we can use this time to turn to reflection and prayer,” he said.  He suggested that those so inclined pray for frontline medical professionals who he said are “rushing in to war” each day as they enter their workplaces.  “They’re running inside to tremendous danger.”

He asked Americans to “pray for the families who have lost loved ones…it’s a great hour of grief for our nation and the world.”

The coronavirus is now present in 182 countries, he reported.  “We have learned so much; we will be stronger than ever…”

He reiterated that Americans wish to return to work and that the CARES Act will assist in that regard.

Task Force member Dr. Deborah Birx said that “hope” is emerging in Italy and Spain, whose daily numbers of deaths are now declining.  She narrated while a series of slides was shown representing the most infected U.S. states of New York, New Jersey, Louisiana, Connecticut and Michigan.

Some states such as New Jersey continue to show an increase in the percentage of infection, she said.   Connecticut, whose infection rate was 15% last week, is now 20%, according to Birx.

RADM John Polowczyk detailed ongoing distribution of supplies and medications, including hydroxychloroquine “so that doctors can write those prescriptions prior to going to a hospital.”

VA Secretary Robert Wilkie said that agency-run hospitals will be made available to Louisiana in its time of need.

“At this president’s direction, we are sparing no expense” in fighting the virus, Vice President Mike Pence, who heads the Task Force, said.  He said that hundreds of FEMA personnel will arrive in New York to provide relief to local healthcare workers.

Pence said he spoke with Louisiana Gov. John Bel Edwards, who told him that “new cases were down slightly.”

Michigan Gov. Gretchen Whitmer told Pence that a new clinical trial of hydroxychloroquine has been launched, Pence said.  Whitmer on March 24 had issued an executive order barring physicians from prescribing the drug outside of “legitimate medical purposes” at the prompting of the state’s Department of Licensing and Regulatory Affairs.

Pence said that Illinois  and Michigan “are in the forefront of our thinking” given the increasing number of infections.

He thanked Oregon and Washington State for dispatching ventilators to New York City and the Strategic National Stockpile, respectively, given a decline in cases in those states.  The first domestic coronavirus case was identified in a Washington State nursing home.

“We are beginning to see the glimmers of progress,” Pence said.  “Like your president, I’m an optimistic person, and I’m hopeful.”

“If that holds, it’s because of of what the American people are doing,” he said.  “Thank you for putting other people’s lives in the forefront…”

He ended by stating, “We’ll get through this a lot sooner than we thought.”

The presser then invited reporters’ questions.