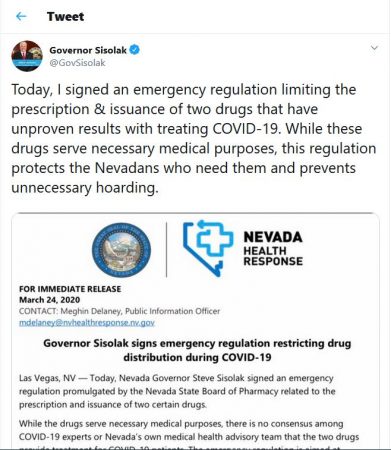 (Mar. 28, 2020) — On Tuesday, March 24, the governors of Michigan and Nevada signed respective executive orders prohibiting physicians from prescribing hydroxychloroquine and chloroquine to patients for the treatment of the novel coronavirus, or COVID-19, outside of a hospital.

Both Governor Steve Sisolak (D-NV) and Gov. Gretchen Whitmer (D-MI) acted upon recommendations from their respective public health entities.  In his order, Sisolak reiterated a request from the Nevada State Board of Pharmacy to reserve the prescribing of hydroxychloroquine and chloroquine for “legitimate medical purposes” only.

The Michigan Department of Licensing and Regulatory Affairs wrote that it “received multiple allegations of Michigan physicians inappropriately prescribing hydroxychloroquine or chloroquine to themselves, family, friends, and/or coworkers without a legitimate medical purpose.”

According to the Federal Drug Administration (FDA) as to “off-label” usage of a medication:

From the FDA perspective, once the FDA approves a drug, healthcare providers generally may prescribe the drug for an unapproved use when they judge that it is medically appropriate for their patient.

Additionally, the FDA advises patients, “If you and your healthcare provider decide to use an approved drug for an unapproved use to treat your disease or medical condition, remember that FDA has not determined that the drug is safe and effective for the unapproved use.”

A robust research effort is currently under way to develop a vaccine against Covid-19.10 We anticipate that the first candidates will enter phase 1 trials by early spring. Therapy currently consists of supportive care while a variety of investigational approaches are being explored.11 Among these are the antiviral medication lopinavir–ritonavir, interferon-1β, the RNA polymerase inhibitor remdesivir, chloroquine, and a variety of traditional Chinese medicine products.11 Once available, intravenous hyperimmune globulin from recovered persons and monoclonal antibodies may be attractive candidates to study in early intervention. Critical to moving the field forward, even in the context of an outbreak, is ensuring that investigational products are evaluated in scientifically and ethically sound studies.12

After serving multiple terms on the Clark County Commission, including as its chairman, Sisolak was elected governor on November 6, 2018 and sworn into office in January 2019.  He was preceded by Republican Brian Sandoval, a Republican and former federal judge.

“Today, I signed an emergency regulation limiting the prescription & issuance of two drugs that have unproven results with treating COVID-19,” Sisolak tweeted on March 24. “While these drugs serve necessary medical purposes, this regulation protects the Nevadans who need them and prevents unnecessary hoarding.”

In an information release for clinicians “last reviewed” on March 21, 2020, the Centers for Disease Control (CDC) states, in part:

There are no US Food and Drug Administration (FDA)-approved drugs specifically for the treatment of patients with COVID-19. At present clinical management includes infection prevention and control measures and supportive care, including supplementary oxygen and mechanical ventilatory support when indicated. An array of drugs approved for other indications as well as several investigational drugs are being studied in several hundred clinical trials that are underway across the globe. The purpose of this document is to provide information on two of the approved drugs (chloroquine and hydroxychloroquine) and one of the investigational agents (remdesivir) currently in use in the United States…

Hydroxychloroquine is currently under investigation in clinical trials for pre-exposure or post-exposure prophylaxis of SARS-CoV-2 infection, and treatment of patients with mild, moderate, and severe COVID-19. In the United States, several clinical trials of hydroxychloroquine for prophylaxis or treatment of SARS-CoV-2 infection are planned or will be enrolling soon.  More information on trials can be found at:  https://clinicaltrials.gov/external icon.

According to the National Institutes for Health (NIH), COVID-19 was originally termed “SARS-CoV-2.”

In its March 23 letter to Sisolak requesting the executive order, the Nevada State Board of Pharmacy wrote that hydroxychloroquine and chloroquine, which are FDA-approved for malaria and other conditions, are currently being studied for their effectiveness in treating COVID-19.  It claimed that “an emergency exists due to the hoarding and stockpiling of chloroquine and hydroxychloroquine during the COVID-19 pandemic” which has created a “shortage of supplies of these drugs for legitimate medical purposes.”

On the same day, the Associated Press reported Sisolak’s executive order but retracted the story the following day without explanation.  “In a story March 24, 2020, about coronavirus in Nevada, the Associated Press erroneously reported that Gov. Steve Sisolak signed an emergency order barring the use of anti-malaria drugs to treat people with coronavirus,” the AP wrote on March 25 under the title, “Correction: Virus Outbreak-Nevada Story.”

Any text from the original article appears to have been excised.

However, a March 24, 2020 AP article appearing in The Washington Times reads:

LAS VEGAS — Nevada’s governor has signed an emergency order barring the use of anti-malaria drugs for someone who has the coronavirus.

Trump last week falsely stated that the Food and Drug Administration had just approved the use of chloroquine to treat patients infected with coronavirus. After the FDA’s chief said the drug still needs to be tested for that use, Trump overstated the drug’s potential benefits in containing the virus.

The AP appears to have been referring to the March 19 White House Coronavirus Task Force press briefing; other media outlets echoed the AP’s finding.  Trump’s full remarks on that day begin at approximately the 9:00 mark here, during which he said that the FDA had approved certain drugs for coronavirus as “compassionate use,” a claim the FDA has affirmed.

In addition to the AP, Bloomberg reported on March 24, “The Food and Drug Administration has been told by President Donald Trump to see if it can expand the use of a decades-old malaria drug as an experimental treatment for coronavirus patients.”

Dr. Mehmet Oz, a frequent guest of late on the Fox News Channel, has reported positive results in the use of chloroquine, hydroxychloroquine and azithromycin obtained by a French physician, Didier Raoult, M.D, PhD, while cautioning that the regimen Raoult described continues to undergo study and that readers should not “take these medications without the guidance of a doctor.” (emphasis Dr. Oz’s)

At a Fox News “virtual townhall” on the U.S. response to the coronavirus pandemic conducted on March 24, Vice President Mike Pence said that “the FDA [Food and Drug Administration] is approving off-label use for the [anti-malarial drug] hydroxychloroquine right now” and “doctors can now prescribe chloroquine for that off-label purpose of dealing with the symptoms of coronavirus.”

“We are making that clear across the country,” Pence added.

An FDA-sanctioned study of hydroxychloroquine’s efficacy for coronavirus based in Minnesota is seeking more volunteers, ABC News reported Wednesday.

While doctors have agreed that clinical trials need to be completed on the drug or drug combinations, some are reporting very favorable results after prescribing them to patients with coronavirus.  A Monroe, NY physician, Dr. Vladimir Zelenko, who interviewed with President Trump’s attorney, Rudy Giuliani, and other outlets recently claimed that “he had kept more than 500 symptomatic patients out of the hospital” by prescribing a combination of azithromycin, hydroxychloroquine and zinc sulfate for patients complaining of “shortness of breath of any age, and those over 60 years old or who are immunocompromised and exhibiting milder symptoms.”

On March 25, Las-Vegas-based KTNV reported that Sisolak said of his new order, “This emergency regulation protects Nevadans who needs these drugs for legitimate medical purposes. At this point in time, there is no known cure for COVID-19 and we must not withhold these drugs from those who need them.”

The paper additionally reported that “Dr. Ishan Azzam, the chief medical officer for the state Division of Public and Behavioral Health,” remarked on the occasion, “This emergency regulation is a strong step in protecting patients. While studies are underway [sic] on the usefulness of these drugs in treating COVID-19, we must deal with facts, not fiction.  Preserving these drugs for those who need it is the right decision.”

Appointed in May 2018, Azzam’s first name is spelled “Ihsan,” and his official title is stated as “Chief Medical Officer” for the State of Nevada Department of Health and Human Services, Division of Public and Behavioral Health.  The press release announcing his appointment states of his experience:

Ihsan Azzam testified in Las Vegas on Tuesday that he has a master’s degree and worked for several years in environmental public health and epidemiology before being named chief state medical officer last May.

Azzam says he practiced for several years as an obstetrics and gynecology physician in Africa before moving to the United States in the 1990s.

However, the AP added, “That qualifies Azzam for the job under Nevada state law.”

On March 22, New York Gov. Andrew Cuomo announced that on March 24, the following Tuesday, “The federal government cleared the way for New York to experiment with the malaria and lupus drug hydroxychloroquine and the antibiotic Zithromax (generic name azithromycin) as a treatment for COVID-19,” as paraphrased by NBC-New York.

The following day, NBC News reported that hydroxychloroquine, also known as Plaquenil, was becoming difficult to obtain for patients already taking it for lupus.  “Clinical tests are only just beginning, and infectious disease experts say it’s too soon to reach a conclusion,” NBC reported on March 23.  “Still, the publicity surrounding hydroxychloroquine, which began well before Trump’s remarks, has fueled shortages across the country.”

On March 24, Cuomo issued Executive Order #202.10 titled, “Continuing Temporary Suspension and Modification of Laws Relating to the Disaster Emergency” containing, among other items, the directive:

No pharmacist shall dispense hydroxychloroquine or chloroquine except when written as prescribed for an FDA-approved indication; or as part of a state approved clinical trial related to COVID-19 for a patient who has tested positive for COVID-19, with such test result documented as part of the prescription. No other experimental or prophylactic use shall be permitted, and any permitted prescription is limited to one fourteen day prescription with no refills.

On Friday The Post & Email contacted Sisolak’s public information officer at the email address appearing in his tweet.  We wrote:

Hello, I have read conflicting reports about Governor Sisolak’s March 24 executive order regarding the prescription of hydroxychloroquine and chloroquine for COVID-19 patients. Of course, I also read the actual order, which appears to say that a physician cannot prescribe either of those drugs for a COVID- 9 patient even if he or she believes it is the very best course of treatment available.

Does that not infringe on a Nevadan’s right, constitutional or otherwise, to make an informed decision about his or her health in consultation with his physician? Does the directive contemplate that untreated COVID-19 patients might worsen and require hospitalization, further taxing the public health system and endangering more lives?

If the pilot study being conducted now in New York City should prove positive for the treatment of COVID-19, would the governor consider modifying his directive?

Shortly afterward we received a response from Meghin Delaney, which reads:

Hi there,
Here is the regulation: https://nvhealthresponse.nv.gov/wp-content/uploads/2020/03/3.24-RX-regulation.pdf
The State Board of Pharmacy also issued information about the regulation: https://nvhealthresponse.nv.gov/wp-content/uploads/2020/03/03.25-Board-of-Pharmacy-release.pdf
Here’s a relevant part of what they wrote: The provisions of this emergency regulation do not apply to a chart order for an inpatient in a hospital or other institutional setting. Hospital patients are receiving and will continue to receive chloroquine and hydroxychloroquine for treatment of COVID-19.