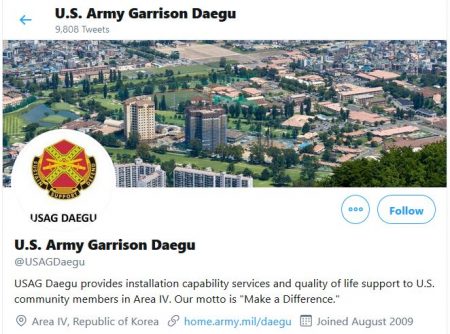 (Mar. 17, 2020) — The Military Times reported Tuesday that U.S. forces stationed in South Korea have lifted travel restrictions in Cheonan, an area described as “a virus hotspot just less than a week ago,” referring to COVID-19, or the novel coronavirus from Wuhan, China which has spread worldwide.

According to data compiled by Johns Hopkins University, South Korea has had a total of 8,320 confirmed cases of COVID-19 but only 81 deaths, numbers which appear to be corroborated on the nation’s website, which does not yet have an English version.

The Military Times reported that the U.S. garrison at Daegu, South Korea celebrated a lower rate of infection reported on Sunday and Monday.

Daegu was the city where a large outbreak of the virus was identified in late February stemming from a local church gathering and is in close proximity to four Army bases.

The church quickly suspended its services in the hope of containing the spread of the virus, Time reported on February 24.  At the time, South Korean President Moon Jae-in was criticized for allegedly “of not recognizing the danger posed by the coronavirus.”

As of Friday, one U.S. service member, four family members and four South Koreans employed by the U.S. Army were receiving treatment for the virus, a number which has held steady since then, The Times reported Tuesday.

Some of the first patients identified as having COVID-19 in South Korea had worked in Wuhan or had other ties to China.

South Korea’s significantly lower death rate as compared to other countries such as China, Italy and Iran is attributed to its prompt initiation of testing centers.  The International Business Times reported that a lower percentage of South Koreans is age 60 or over, as opposed to Italy, which has been extremely hard-hit by the pandemic and suffered a much higher mortality rate.

The elderly are particularly vulnerable to secondary effects from virus, which include pneumonia.

Whether or not a victim of the virus smokes is also a factor, IBT reported.

The garrison has adopted the motto, “#KILLtheVirus until it’s DEAD, DEAD, DEAD,” a hashtag President Trump invoked on Tuesday morning and of which Garrison Daegu took note.

In late February, the U.S. Department of Defense closed its schools for children of service members for a week, the AP reported, and enacted a plan which included “social distancing,” a term now familiar to Americans given the communication of the disease to all 50 states and the District of Columbia as of Tuesday.

Other measures in the DOD’s plan to fight the coronavirus are quarantines, aggressive cleaning of commonly-used surfaces, the cancellation of scheduled events, and restricted travel, The Times reported.

West Virginia was the last state to experience no coronavirus cases but reported one in its eastern panhandle, Gov. Jim Justice announced Tuesday afternoon.

South Korea’s “drive-in” testing centers are currently being replicated throughout the United States. On March 4, ABC News reported that “South Korea’s drastic measures against the coronavirus offers a glimpse of what the US may need to do.”

As of Monday night, a number of states’ governors ordered restaurants, bars, fitness centers, and commercial betting facilities to close other than for providing takeout or delivered food.  Public schools are closed in Connecticut, New York City, California, and New Jersey, among others.