(Feb. 19, 2020) — A copy of a letter received Tuesday from Tennessee state inmate Grenda Ray Harmer indicates, as he stated last year, that he will not consent to a release from the custody of the Tennessee Department of Correction (TDOC) on his scheduled release date of February 26.

The letter is directed to TDOC Commissioner Tony Parker, an appointee of former Tennessee Gov. Bill Haslam who the state’s new governor, Bill Lee, retained upon taking office in January 2019.

Harmer is contending with several medical issues and in late November informed prison staff he would choose to remain in custody until his “health is restored,” in accordance with state law.

TCA 41-21-204(e) states that “Any inmate who is sick at the expiration of the term of imprisonment shall not be discharged until the inmate’s health is restored, except at the inmate’s request.”

Harmer was reportedly scheduled for evaluation for his conditions at the Lois M. DeBerry Special Needs Facility in Nashville, although a handwritten note to The Post & Email enclosed with the letter does not indicate he received it.

Last spring, Harmer suspected that his conditions would not be resolved by February and wrote to Lee, “When my release date of February 26, 2020 comes around and my health issues have not been taken care of, understand this: I WILL NOT ALLOW THE TDOC TO RELEASE ME.”

Because of the severity of the crimes for which he was convicted, Harmer was not eligible for parole.  He is currently serving his last full week of the 25-year sentence handed down in 1998.  Prior to that, he served time in the Indiana penal system.

In the letter, Harmer told Lee that once his sentence expires, he will require “suitable housing” separate from inmates still serving sentences.  The Post & Email was unable to find such a provision within TDOC’s Administrative Policies and Procedures or in state statutes pertaining to Harmer’s anticipated specific situation.

Harmer’s reference to TDOC Policy 113.04 cites a “policy change notice” effective June 1, 2019 which is not currently posted online; the latest version is dated June 1, 2018.  In this writer’s experience, the policies are often updated and renumbered but not always immediately available publicly. 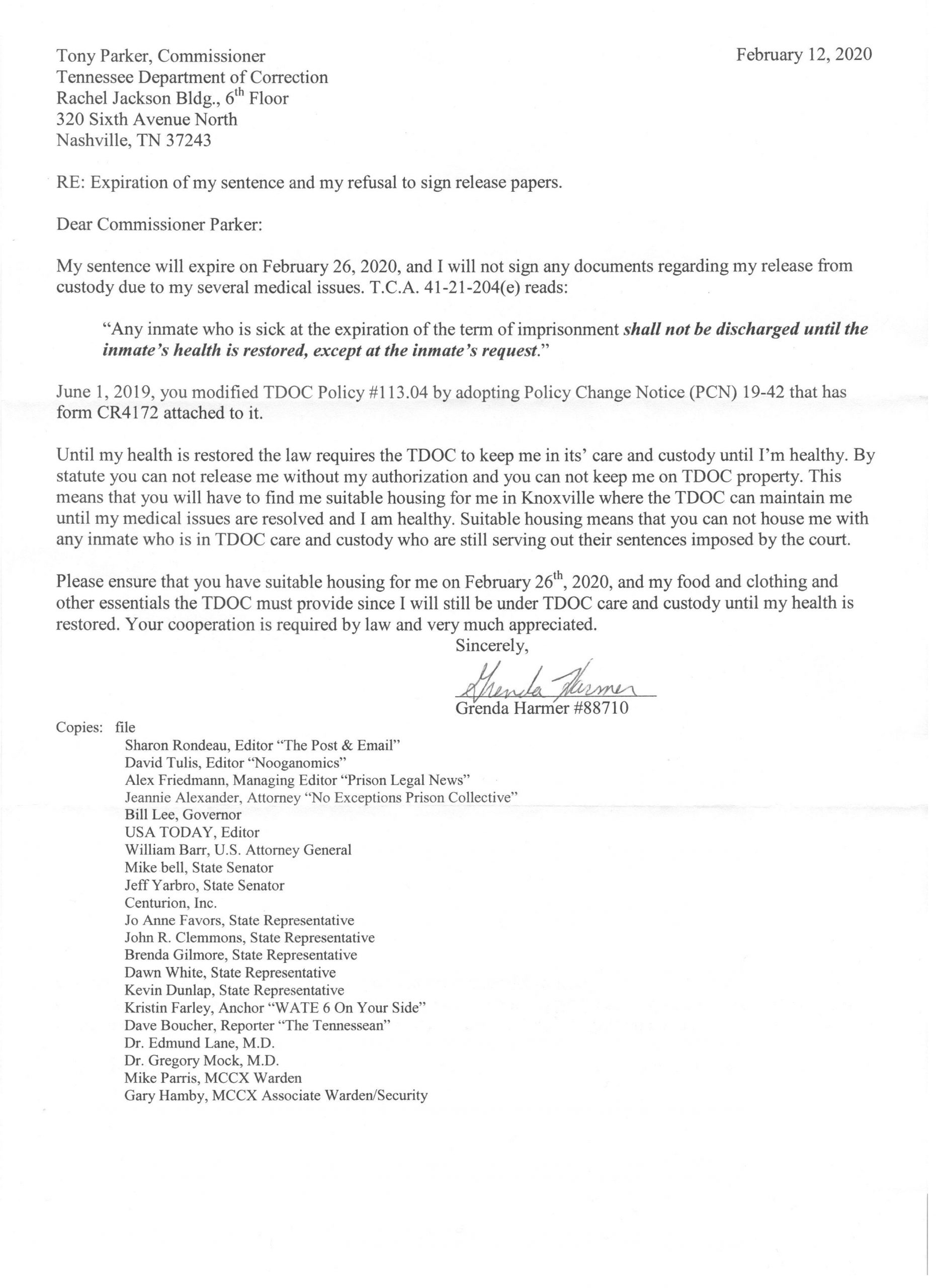