(Jan. 4, 2020) — In the third episode of his podcast titled, “Punching Back with George Papadopoulos,” former 2016 Trump campaign foreign-policy adviser George Papadopoulos said that the FBI attorney who the Justice Department inspector general cited in a recent report for altering an email in the course of submitting a surveillance warrant application on another former Trump-campaign aide, Carter Page, was “not a low-level” FBI employee, as some in the media have claimed.

In late 2017, Papadopoulos accepted a “guilty” plea for lying to the FBI following his arrest at Dulles International Airport by FBI agents who were unsuccessfully seeking $10,000 in cash within his personal possessions.

The 32-year-old California congressional candidate described the cash the agents were reportedly expecting to find as “this infamous, mysterious $10,000 that I received in Israel that ended up resulting in this insane arrest at Dulles Airport.”

Papadopoulos has long claimed that he was the subject of surveillance during the 2016 campaign, perhaps by issuance of a “FISA” warrant. His allegation of personal surveillance was confirmed by the Justice Department inspector general’s report, released December 9, as well as his statements that Page, Lt. Gen. Michael Flynn (Ret), and former Trump campaign manager Paul Manafort were also under FBI investigation in 2016 (p. 4).

The FBI’s counterintelligence operation into the Trump campaign was identified in 2018 by The New York Times as “Crossfire Hurricane.”

Page, however, according to the report, was the only one of the four who was placed under formal Foreign Intelligence Surveillance Act (FISA) monitoring based on the FBI’s investigation into the possibility that someone within the campaign might have been collaborating with Russia.

Page 5 of the report states that the catalyst for the FBI’s opening of Crossfire was a May 2016 conversation between Papadopoulos and a “Friendly Foreign Government” (FFG) in which Papadopoulos allegedly “suggested the Trump team had received some kind of suggestion from Russia that it could assist this process with the anonymous release of information during the campaign that would be damaging to Mrs. Clinton (and President Obama).”

A 22-month, $35 million investigation by then-Special Counsel Robert Mueller and a team of 19 prosecutors determined in March of last year that no one from the campaign, nor any American, conspired with Russian operatives to affect the results of the 2016 election. However, Papadopoulos, Manafort, and a number of other Americans were charged with “process” crimes, with Papadopoulos spending 12 days in federal prison and Manafort sentenced to 7½ years on unrelated violations.

In his previous podcast, Papadopoulos focused on the mysterious Maltese professor, Joseph Mifsud, who reportedly told Papadopoulos on April 26, 2016 that unnamed “Russians” possessed “dirt” on Hillary Clinton.  In that episode, Papadopoulos asked rhetorically, “Where in the World is Little Joey Mifsud?” since the academic has not been seen nor heard from in approximately two years.

Papadopoulos has claimed on Twitter that the Italian government has provided Mifsud with protection and that Attorney General William Barr and U.S. Attorney for the District of Connecticut John Durham, who is investigating the origins of Crossfire, are aware that Italy assisted U.S. intelligence services with their 2016 surveillance of the Trump campaign.

While the official date the FBI has provided for its opening of the probe is July 31, 2016, Rep. Devin Nunes (R-CA22) reported last July that the FBI’s surveillance of Flynn began in 2015.

In the podcast as well as in his book, “Deep State Target,” Papadopoulos said that the IG report refers to former FBI attorney Kevin Clinesmith as “FBI Attorney 2,” which the report states is in the context of the 2015-2016 investigation into Clinton’s use of a private email server (p. 256) during her tenure as Obama’s Secretary of State.  That investigation was known as “Mid-Year Exam.” 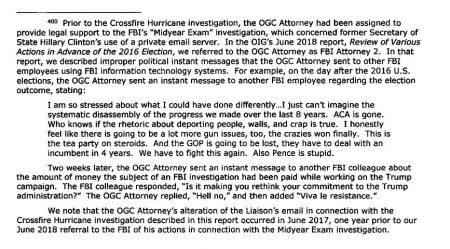 Although not identified by name in the IG report, Papadopoulos’s description of Clinesmith as “FBI Attorney 2” has been corroborated by major media.

Since launching his podcast, Papadopoulos said, he has become a victim of “bizarre censorship” on social media.  “The Deep State’s clearly on the defense right now, and they don’t want this truth coming out,” he said at 5:25, referring to those in the federal government who resolved to “resist” the Trump presidency, including Clinesmith, according to the IG report.

He asserted that an interview he did with host and former Secret Service agent Dan Bongino in early November 2018 after the lifting of a gag order was a catalyst for certain members of Congress, including Nunes, to further investigate specific aspects of Crossire.

According to a recent appearance on Bongino’s show, Nunes and his colleagues on the House Intelligence Committee found Papadopoulos’s November 2, 2018 interview “really telling, when Papadopoulos had laid out a lot of things we actually had not heard before…it looks like the poor guy just got set up.”

Papadopoulos reminded his audience that also in 2018, he “voluntarily” testified behind closed doors to the House Committee on Oversight & Government Reform in the same general time frame as former Deputy Attorney General Sally Yates, former FBI Director James Comey, and former Attorney General Loretta Lynch.  “It’s a testimony that wasn’t really covered that much because I think it went against the narrative at the time,” Papadopoulos said, adding that he and the others were called upon to testify about “FISA abuse.”

Papadopoulos testified that after he was unexpectedly handed the money in a hotel room in Israel, he “started to believe that I was being framed for something.”  He said he gave the $10,000 to an attorney in Greece before returning to the U.S. (p. 121) 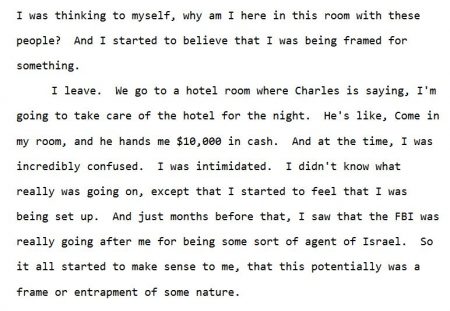 “No one else lived this story; I lived it, and it’s a very unique story that only I can tell, because moving forward in this episode and other episodes, discussing Kevin Clinesmith, who is the topic of today’s conversation, along with this infamous $10,000 setup that I was involved in, it was myself and Kevin Clinesmith in that room…” Papadopoulos continued his story (5:45), referring to a meeting he was requested to attend with the FBI in Chicago in early 2017.  In “Deep State Target,” Papadopoulos asserts that he was not represented by counsel at either of two meetings he had with FBI agents.

Papadopoulos said the individual who handed him the $10,000 in cash in Tel Aviv is Charles Tawil (6:16 in the podcast).

Regarding Clinesmith, Papadopoulos said (6:37), the media’s portrayal of him as a “low-level DOJ attorney who got caught altering information on the FISA warrant application of Carter Page and he was basically a nobody…” is inaccurate.  “When you actually look into the story a little closer, this guy was no low-level official at all. In fact, he was an attorney with the FBI’s National Security and Cyber Law branch, and he worked directly under the FBI general counsel, Jim Baker, who’s actually under investigation himself…” Papadopoulos told his audience.

On November 22, 2019, The Washington Examiner confirmed Clinesmith’s former FBI role as depicted by Papadopoulos.  “He had worked on the Clinton email investigation as well as the Trump-Russia probe,” the paper reported.

During his October 2018 closed-door testimony, Baker’s attorney confirmed that his client was under investigation by Durham’s office for allegedly leaking sensitive information to the media.

“According to the IG, which I’m very happy about, this guy is now under criminal investigation and he’s likely going to get indicted,” Papadopoulos said of Clinesmith (8:06).