“AMERICA HAS MY BACK”

(Nov. 3, 2018) — On Friday, former unpaid Trump campaign adviser George Papadopoulos interviewed with radio host, Fox News contributor and former Secret Service agent Dan Bongino about how he believes he came to be embroiled in a “set up” orchestrated by the FBI in the months leading up to the 2016 presidential election.

The first topic discussed was how his meeting with Maltese professor Joseph Mifsud, now said to have been working for the FBI when he conveyed alleged Russian “dirt” on Hillary Clinton to Papadopoulos in March 2016, came about.

On October 22, the Associated Press reported that Mifsud “often vanishes after scandals” and “hasn’t been seen publicly for nearly a year.”

Very early on Saturday morning, Papadopoulos tweeted his thanks to Bongino and his producer for the interview.  “It’s such a complex story,” he tweeted. “Set ups were everywhere. When you are innocent, and a patriot, not even the powers of the MI6/Obama CIA can destroy you”. [sic]

“MI6” is the name for the “Secret Intelligence Service,” or British intelligence agency.

Papadopoulos accepted a plea deal last year stemming from Special Counsel Robert Mueller’s investigation into alleged ties between the Trump campaign and Russian operatives, an agreement he has said he is considering withdrawing from based on new information.

Bongino referred to Papadopoulos’s “Statement of Offense” issued by Mueller’s team about which Papadopoulos has tweeted and discussed in a string of media interviews since last month.

At the opening of the show, Bongino pointed out that he has written a book titled “Spygate:  The Attempted Sabotage of Donald J. Trump” involving Papadopoulos’s involvement in the campaign and an alleged FBI plan to foil Donald Trump’s chances at winning the presidency.

In early 2016, Papadopoulos was working in the European energy business with an emphasis on Israel and Cyprus and now believes that, as with Carter Page, he was the subject of a FISA surveillance warrant.

Mifsud and Papadopoulos met in Rome while the latter was employed at the “London Centre for International Law Practice” [sic] which he now maintains is a Western intelligence “front group.”  He said that the legal counsel for the FBI in the UK “happens to also be a director at this organization I used to work for.”

Before returning to the U.S. to join the Trump campaign, Papadopoulos said that the FBI UK legal counsel urged him to meet with Mifsud at Link Campus, which Papadopoulos said is actually a “training ground for Western intelligence operatives in Rome.”

“They told me, ‘It’s very important for you to meet Joseph Mifsud,'” Papadopoulos said.   Bongino responded that while researching for his book, he concluded that Mifsud was either a very clever Russian agent who easily ingratiated himself with Western intelligence figures or not a Russian agent at all.

Papadopoulos said during their meeting, Mifsud presented himself as having valuable worldwide contacts.  A week later, Papadopoulos said, Mifsud emailed him asking him to meet a woman Mifsud said was “Putin’s niece.”  Mifsud introduced him to the woman at the London Centre, where Mifsud was a staff member through last fall as shown by the following successive screenshots gleaned from a Google search for “London Center for International Law Practice.” 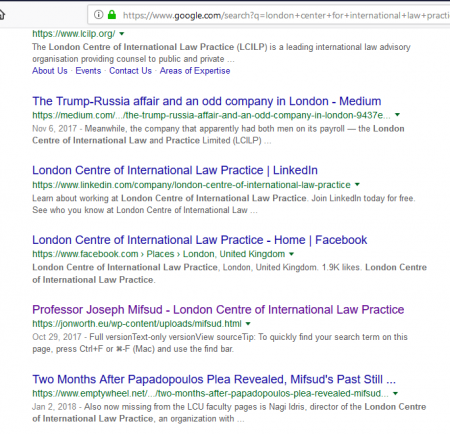 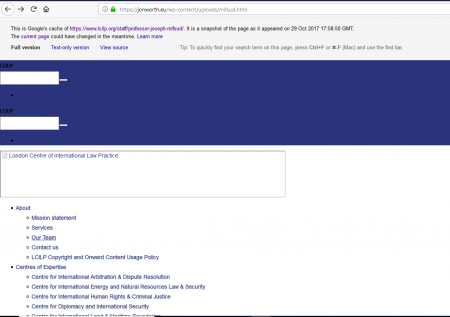 The following month, Papapdopoulos said, after he joined Trump’s foreign-policy team, someone presenting him- or herself as the same woman began sending him emails along with Mifsud.  “She goes from speaking barely any English to all of a sudden, she’s fluent in the language,” he observed.  He added that the person indicated that he or she would introduce him to “everyone with Mifsud in Moscow.”

He said he texted the person to ask, “Are you the same person?” as the woman he met for lunch in London and never received a response.

“This is an old tactic for assets in the intelligence community,” Bongino commented.

Referring to the charging documents, Bongino remarked, “A lot of these statements of offense…It’s all spoken from a birds-eye view. It’s spoken like there was a third person there.”  Clarifying, he said that it appears to him “there was an informant there” in the person of the alleged “Putin’s niece.”

“I find it odd that they constantly talk about in the Statement of Offense the substantial connections these people had to Russia…Ironically, in the same charging document, it says ‘Defendant Papadopoulos said that they were a big nothing,'” Bongino said.

Like Trump’s previous characterization of the Mueller investigation, Bongino opined that Papadopoulos’s prosecution was “a witch hunt” and “absurd.”

Mifsud’s attorney, Stephan Roh, has reportedly said that Mifsud was working for “Western intelligence and under the guidance of the FBI” when he approached Papadopoulos.

“You were unquestionably, then, set up by your own government,” Bongino exclaimed.  “How does that make you feel that you may be the centerpiece of the biggest political scandal of our time?”

Papadopoulos then revealed that his wife, Simona Mangiante Papadopoulos, was acquainted with Mifsud from years ago.  Her Twitter profile states that she once served as “legal advisor to the Presidency Office of the European Parliament.”

Mangiante Papadopoulos advocated for her husband to withdraw his plea agreement long before he voiced the possibility himself.  “She’s known Mifsud longer than everyone.  She actually used to work at the European Parliament; she knows about his ties; he used to meander around the European Parliament, the European institutions, and she knew about his connections to the Clintons, to the socialists in Europe.  This guy was not connected at all to the Russians as far as she was telling me, and that’s why she was like, ‘Why on earth are you pleading guilty for when this guy is obviously just setting you up?'” Papadopoulos elucidated.

Papadopoulos then said that the most painful part of his ordeal was “when the FBI presented their sentencing memorandum and they said that I was responsible for helping Mifsud escape and that I was the only one with the impression that Mifsud was a Russian agent, but there’s actually no evidence that was ever supporting that panacea [sic] that he was ever working with Russian intelligence.”

“Just to summarize, it’s been horrifying, but America has my back; you’ve had my back since day one, and we’re going to get through this stronger than ever,” Papadopoulos summarized that point of the discussion.