“WILL BE REVEALED VERY SOON” 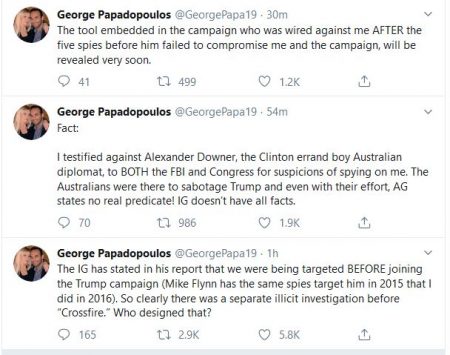 (Dec. 11, 2019) — Early Wednesday afternoon, former Trump foreign-policy adviser George Papadopoulos tweeted, responding to DOJ Inspector General Michael Horowitz’s testimony to the Senate Judiciary Committee, that “The tool embedded in the campaign who was wired against me AFTER the five spies before him failed to compromise me and the campaign, will be revealed very soon.”

Papadopoulos has previously said, and wrote in his book, “Deep State Target,” that approximately a half-dozen individuals approached him under strange circumstances while he was working in Europe in 2016, one of whom, Joseph Mifsud, imparted the claim that certain Russians possessed damaging information on Hillary Clinton.

Papadopoulos’s subsequent conversation with then-Australian Ambassador to the UK Alexander Downer, at Downer’s invitation, reportedly touched off the FBI’s probe of the Trump campaign known as “Crossfire Hurricane” based on the allegation that someone within the Trump campaign might have been collaborating with Russia in activity which could have potentially affected the outcome of the U.S. presidential election.

Horowitz’s 476-page report, released on Monday as the result of 19 months of work, now numbers 480 pages and contends that no “documentary or testimonial evidence” was found to show that the FBI’s opening of the probe was based on political bias or an improper predicate.

In his testimony to the Judiciary Committee beginning at 10:00 a.m. EST, Horowitz said his investigation also found no evidence that a “confidential human source” (CHS) was placed within the Trump campaign by the FBI.

On Tuesday evening, Papadopoulos, who was prosecuted and accepted a plea deal for lying to the FBI in 2017 in connection with “Crossfire Hurricane,” refuted that finding by tweeting, “FBI embedded spies WITHIN the campaign (one spoke to me and I know who it is).”

In lengthy opening remarks Wednesday morning, Committee Chairman Lindsey Graham made the case that biased FBI officials utilized what they knew was discredited, or at a minimum, unsubstantiated, allegations in the form of a “dossier” that another former Trump-campaign adviser, Carter Page, was acting as an “agent as a foreign power” in order to convince the Foreign Intelligence Surveillance Court (FISC) to approve four successive warrants to capture Page’s communications.

On page 357, the report states that the IG investigation identified “numerous instances in which factual representations in the applications were inaccurate, incomplete, or unsupported by appropriate documentation, based upon information the FBI had in its possession at the time the applications were filed.”

In a footnote on page 352, however, Horowitz states that the dossier “played no role in the opening of Crossfire Hurricane,” a statement supportive of Papadopoulos’s first relevant tweet on Wednesday.

All evidence submitted to the FISC is expected to be thoroughly vetted by FBI and DOJ policy, but Graham said that the “primary sub-source” for the Steele dossier said during a January 2017 FBI interview that his statements quoted in the dossier were taken out of context, unsubstantiated, and that some were speculative in manner.  The relevant reference appears in the report on page 406, among others.

Conversely, ranking member Dianne Feinstein stressed and confirmed with Horowitz in her opening statement that the IG team found no evidence political bias or insufficient predicate for the FBI’s opening of its investigation into the campaign.

The Horowitz report supported, however, Papadopoulos’s longstanding claim that in 2016 or perhaps earlier, the FBI conducted surveillance on four individuals:  Page; Lt. Gen. Michael T. Flynn (Ret), who was briefly Trump’s first national-security adviser; Paul Manafort, and himself.  In his testimony Wednesday morning, Horowitz confirmed that within days of the opening of the FBI probe, which has been provided as July 31, 2016, “cases” were opened on Page, Flynn, Papadopoulos, and Manafort.