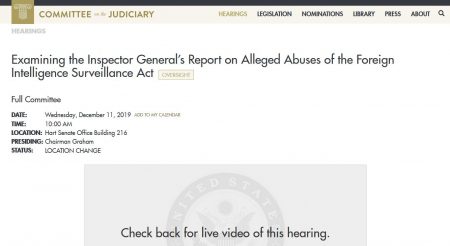 Beginning at 10:00 a.m. EST, the hearing is titled, “Examining the Inspector General’s Report on Alleged Abuses of the Foreign Intelligence Surveillance Act” at which Horowitz will be the sole witness.

Horowitz’s report, which is 480 pages, cites the FBI and Justice Department for “inaccuracies and omissions” (p. 17) in its applications to conduct surveillance on Carter Page, a former Trump-campaign associate who the FBI claimed was acting as “an agent of a foreign power” during the 2016 campaign cycle.

In truth, Page has said in various interviews, over a matter of “decades,” he provided information he believed would be helpful to the FBI and CIA gleaned from his overseas travel, including to Russia.  On Monday night, Page told Hannity that he is considering suing the FBI over the surveillance warrants, which has said generated negative media coverage which damaged his reputation.

On December 2, Graham told “Hannity” host Sean Hannity that on December 11, he planned to ask Horowitz questions about the use of the “Steele dossier” in the Page surveillance warrant applications.  The dossier was never verified and was paid for by the DNC and Hillary Clinton campaign, facts the FBI reportedly did not divulge to the Foreign Intelligence Surveillance Court (FISC) when applying for the warrants.

Editor’s Note:  The Horowitz report as issued on December 9 was 476 pages; an addition made Wednesday morning begins on page 3 and adds four more pages. 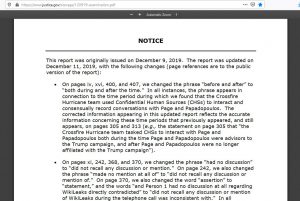