What Did Papadopoulos Tell Congress?

OF SPIES, EMAILS, AND THE FBI 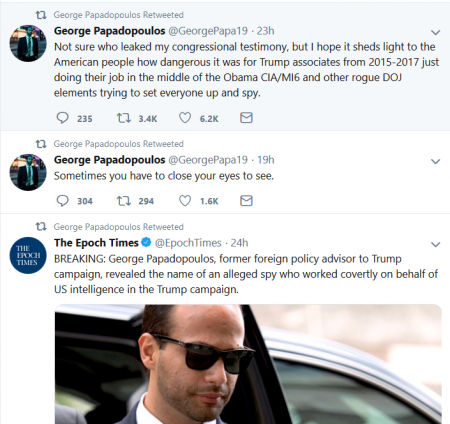 (Jan. 17, 2019) — As former Trump foreign-policy advisor George Papadopoulos tweeted on Wednesday, and as reported that day by radio host Dan Bongino, an article in The Epoch Times dated January 16, 2019 reports that Papadopoulos claimed last fall, in closed-door testimony to members of Congress, that he was asked by the FBI to “wear out wire” when speaking with a person who reportedly imparted to him information about Russians possessing “dirt” on then-Democratic presidential candidate Hillary Clinton.

“Not sure who leaked my congressional testimony, but I hope it sheds light to the American people how dangerous it was for Trump Associates from 2015-2017 just doing their job in the middle of the Obama CIA/MI6 and other rogue DOJ elements trying to set everyone up and spy,” Papadopoulos tweeted on Wednesday.

Not only has Papadopoulos not refuted The Times‘s article, but he also retweeted it on Wednesday.

In early November, prior to Papadopoulos’s serving a two-week prison term as part of a plea agreement with the FBI pertaining to its “Russia collusion” investigation, Bongino interviewed Papadopoulos, who claimed a series of bizarre 2016 encounters with foreign diplomats seeking his company and information about Hillary Clinton’s emails.

It is not refuted that Clinton used a private, non-governmental email server while she served as Obama’s Secretary of State from 2009 to early 2013 and that she failed to release approximately 33,000 emails to congressional investigators, claiming they were of a private nature.

As of July 2016, the FBI claimed to have conducted a full investigation as to whether or not Clinton criminally mishandled classified information over the private server. On July 5, 2016, then-FBI director James Comey gave a solo press conference in which he stated that “no reasonable prosecutor would bring this case.”

Comey’s unusual statements and actions became the fuel for both congressional Democrats and Republicans to call for his removal. After President Trump ultimately did so in May 2017, Democrats largely and loudly objected, claiming that Trump may have obstructed justice in removing the head of the agency which placed his campaign, and him personally, under investigation.

Trump has claimed on multiple occasions that “There was no collusion” on the part of any of his campaign aides or himself with Russian operatives in order to assure that he won the presidency.

In numerous tweets issued in recent weeks, Papadopoulos has claimed that the FBI and DOJ obtained not one, but four FISA warrants on as many individuals associated with then-candidate Donald Trump’s unlikely but ultimately victorious campaign.  Papadopoulos claims to be one of the four.

In late July, in response to a FOIA lawsuit filed by the government watchdog Judicial Watch, the FBI and DOJ released the warrant application on Dr. Carter Page, a short-term, volunteer foreign-policy campaign advisor who has claimed massive damage to his reputation as a result of FBI surveillance conducted on him resulting from the FISA warrant.  Page unsuccessfully sued two media outlets but has a pending lawsuit of the same nature against the DNC.

As related in The Epoch Times‘s article, Papadopoulos has claimed that there was at least one “spy” embedded within the Trump campaign.

Bongino, a successful “conservative” radio show host, author, commentator and former Secret Service agent, published a book in October, “Spygate: The Attempted Sabotage of Donald J. Trump,” about his belief that members of the U.S. government intelligence community were working in 2016 to foil Trump’s chances at becoming president and, failing in that, his nascent presidency.  Written without Papadopoulos’s input, Bongino’s November 2 interview of the 31-year-old was intended to be an eye-opener.

“The alleged spy began contacting Papadopoulos around the time that Papadopoulos met with the foreign minister of Greece in May 2016,” The Times reported. “Although he isn’t named in the testimony, Nikos Kotzias was Greece’s minister for foreign affairs at the time. The meeting with Kotzias was significant because Papadopoulos claims it was the only time he told anyone directly that Russia was in possession of thousands of Hillary Clinton’s emails, a rumor he learned from Maltese professor Joseph Mifsud.”

Mifsud is the individual who Papadopoulos reported initially sought him out for a meeting in London on April 26, 2016 to tell him that unidentified “Russians” had “dirt” on Clinton.

In interviews not only with Bongino but also with Brian Kilmeade of “Fox & Friends,” Papadopoulos said he did not recall discussing the topic of Clinton’s emails with then-Australian Ambassador to the UK Alexander Downer. In an interview with The Australian, Downer claimed that Papadopoulos stated he had knowledge that the emails were in Russian hands.

The “spy” is an “alleged U.S. intelligence source,” The Times reported.

Bongino indicated on Wednesday’s show that the date of July 27, 2016 is a key one in both the FBI investigation of Clinton and its counterintelligence probe into the Trump campaign.  It was the day Papadopoulos was arrested, Bongino revealed.

Also on that day, Bongino reminded his audience, Sara A. Carter, then of Circa News, reported that former FBI Chief Counsel James Baker was under investigation for allegedly leaking classified information to the media.  The report was confirmed in a recent letter sent by House Oversight Committee ranking member Jim Jordan to U.S. Attorney John H. Durham requesting information on his investigation into Baker’s conduct.

As this story was under preparation, Papadopoulos tweeted:

What Did Papadopoulos Tell Congress? added on Thursday, January 17, 2019