IS THE “DEEP STATE” NERVOUS, OR WILL DOJ WATCHDOG THROW A SOFTBALL?

(Dec. 2, 2019) — On Monday night’s “Hannity,” investigative journalist Sara A. Carter predicted that the Justice Department inspector general’s upcoming report to be released one week from today will be “devastating” as to the FBI and DOJ’s conduct in relation to the Trump-Russia “collusion” investigation into the 2016 Trump campaign.

The report is said to examine whether or not surveillance warrants were obtained properly on a former Trump campaign adviser, Carter Page, and perhaps others.

At the opening of the show, however, host Sean Hannity quoted from a Washington Post report issued Monday stating that Attorney General William Barr disagrees with a “key finding” of DOJ Inspector General Michael Horowitz’s report to be released December 9.

For weeks, Sara Carter and other “Hannity” guests have expressed confidence that Horowitz’s findings will be highly incriminating to the DOJ and its subsidiary, the FBI.  On November 22 and 27, however, The New York Times published two articles claiming that Horowitz will reveal an “unprofessional” approach to the Trump-Russia investigation but not criminal wrongdoing.

As Americans await the Horowitz report, a Barr-appointed U.S. attorney from Connecticut, John Durham, is conducting a criminal investigation into the origins of the FBI’s “Crossfire Hurricane” counterintelligence operation into the Trump campaign which began as an “administrative review.”

Horowitz’s “mandate” in the December 9 report, Hannity said, was to “look into the FISA abuse,” referring to the process by which the FBI and DOJ obtained surveillance warrants on Carter Page.  While Durham can convene a grand jury, subpoena witnesses, and issue indictments, Horowitz cannot, Hannity reminded his audience.

“Leaks” from Horowitz’s upcoming report have been “rampant,” Hannity said.

A Horowitz report focusing on former FBI James Comey’s conduct in 2016 recommended criminal investigation to the DOJ, but the agency declined to undertake it, a fact Hannity restated on Monday.

At approximately 9:30 a.m., Senate Judiciary Committee Chairman Lindsey Graham warned Hannity and his audience to be “wary of The Washington Post and The New York Times reporting on what is coming up with Horowitz.  They’ve been trying overtime to spin this thing to diminish its effect to downplay it.  I can tell you without any hesitation Attorney General Barr has every confidence in the work in Mr. Horowitz.  He believes he’s done a good job, a professional job, and he appreciates the work and the effort that’s been put in to disclose an abuse at the Department of Justice.”

Graham later said that if certain reports as to “FISA abuse” prove accurate, Horowitz’s findings will be “devastating,” repeating Sara Carter’s terminology.  Several Republican congressmen have suggesed that criminal referrals will be forthcoming as a result of Horowitz’s report, while congressional Democrats have been largely silent on what the contents of the report might show.

Graham asked why, if the FBI found “credible” evidence to investigate the 2016 Trump campaign for alleged “collusion” with Russia, no one within the campaign was informed of it.  He suggested that the surveillance carried out on Carter Page could then have constituted “spying,” a term Barr used in public testimony to Congress last spring.

Of Horowitz, Graham said, “He’s looking to find if the system got off the rails.” 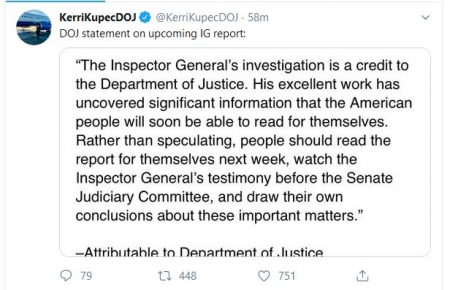 3 Responses to "Report: DOJ Inspector General Report Will Be “Devastating”"