“PROBLEMS WITH THE AFFIDAVITS” 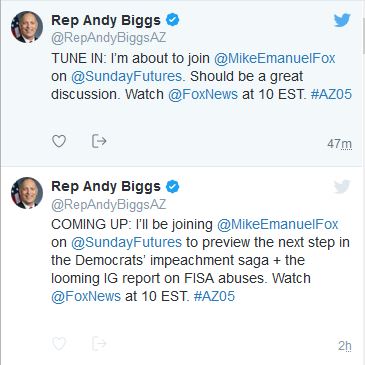 (Dec. 1, 2019) — In an interview at the opening of “Sunday Morning Futures” guest-hosted by Mike Emanuel, Rep. Andy Biggs (R-AZ), a member of the House Judiciary Committee, responded to questions about the upcoming week’s “impeachment inquiry” activity concerning President Trump’s conduct in regard to Ukraine and the anticipated DOJ inspector general report said to be scheduled for release on December 9.

On Monday, the House Intelligence Committee is expected to distribute a “draft” report on its findings, according to Politico, following approximately eight weeks of private and public testimony by more than a dozen witnesses, and vote as to whether or not to “impeach” on Tuesday.

On Wednesday the House Judiciary Committee will take the Intel Committee’s findings and begin its own review by calling what Biggs said will be “law-professor types” to discuss the constitutional standards for impeachment.  “Our ranking member [Rep. Doug] Collins has asked that we have a fair disbursement of guests,” Biggs said.

Judiciary Committee Chairman Jerrold Nadler has invited Trump and his counsel to attend the hearing on December 4; the White House has not responded as to whether or not it will send a representative.  Trump will be in the UK that day for a NATO gathering.

Republicans have claimed that House Intelligence Committee Chairman Adam Schiff (D-CA28) has set “unfair” procedures in calling witnesses, the usage of time during questioning and interfering in witnesses’ responses. On Saturday, House Intel Committee member Rep. John Ratcliffe (R-TX4) tweeted that Schiff has marked a transcript from a closed-door hearing October 4 as “secret” so that responses by the Intelligence Committee inspector general, Michael Atkinson, on the relationship between the “whistleblower” who touched off the inquiry and Schiff’s office will not be made public.

Democrats believe that Trump acted improperly when in a July 25 phone call with Ukrainian President Volodymyr Zelenskiy he asked for “a favor” in the form of a potential inquiry into Ukrainian gas and oil company Burisma Holdings and the former vice president’s son, Hunter Biden, who in 2014 was given a lucrative position on its Board of Directors while Joe Biden served as Ukraine envoy for the Obama regime.

Joe Biden is now a Democrat primary contender for the 2020 presidential nomination, and many have termed Trump’s invoking of the “Biden” name during the phone call as politically-charged.

A video clip Emanuel played during the interview depicted Rep. Hakeem Jeffries (D-NY8) stating that the Founders “didn’t want a king; they didn’t want a dictator; they didn’t want a monarch; they wanted a democracy.”  To that, Biggs said that Democrats have desired to “remove this president” for “3+ years,” before the “high crimes and misdemeanors” stemming from the July 25 phone call were alleged.

House Democrats have termed it a “debunked conspiracy theory” that Ukraine, in addition to Russia, meddled in the 2016 U.S. elections, while House Intel Committee ranking member Devin Nunes has said that the origins of the Trump-Russia “dossier” lie in Ukraine.  During his phone call with Zelenkskiy, Trump mentioned that he has heard that a DNC “server,” said to have been breached in 2016 by Russian operatives by the private company Crowdstrike, might be located in Ukraine.

Trump also identified “Crowdstrike” by name but without specifics.  Previously, he has questioned on Twitter why the FBI admittedly never examined the server and rhetorically asked where the server resides.

The dossier was submitted by the FBI to the Foreign Intelligence Surveillance Court (FISC) for four continuous surveillance warrants on Carter Page, a one-time volunteer foreign-policy adviser to the Trump campaign who the FBI falsely claimed was “an agent of a foreign power” in the affidavits.

In response to Emanuel’s question, “How heated do you expect things to get on the committee on which you serve?” Biggs, who chairs the Republican-founded “Freedom Caucus,” said that “there’s a bunch of brawlers sometimes on the Judiciary Committee, so it should get pretty hot-under-the-collar as we go along.  I don’t think things have been done they way they’ve been done in the past, Mike, so it causes some rancor, and things should be much more feisty…”

On Saturday, Biggs published an editorial co-authored with Rep. Scott Perry which begins, “If we have learned anything in the last two weeks, it is the reality of the deep state, or swamp. Democrats have been relentlessly attacking President Trump since his election. They have been joined by the Washington establishment that includes much of the media, bureaucracy and the executive branch itself.”

As for what he expects to see in the IG report, Biggs, said, “I kind-of think that it’s gonna be pretty hard-hitting.  I think that we’re going to see a lot of misconduct on the part of senior leaders in the FBI and DOJ with regard to obtaining FISA warrants; we’re going to see failure to [inaudible] exculpatory evidence, and I think you’re going to see actually some problems with the affidavits submitted to the court in support of those FISA warrants they were trying to get.  The question it will be:  ‘Will Attorney General Barr’s team bring indictments and prosecute any of these people for misconduct?'” [sic]

In contrast, Emanuel quoted The New York Times as having reported last week that the report will say that “while the FBI was careless and unprofessional in pursuing the Carter Page wiretap, there was no criminal wrongdoing.”

A November 22 article from The Times states:

More broadly, Mr. Horowitz’s report, to be made public on Dec. 9, portrays the overall effort to seek the wiretap order and its renewals as sloppy and unprofessional, according to the people familiar with it. He will also sharply criticize as careless one of the F.B.I. case agents in New York handling the matter and say that the bureau and the Justice Department displayed poor coordination during the investigation, they said.

At the same time, however, the report debunks a series of conspiracy theories and insinuations about the F.B.I. that Mr. Trump and his allies have put forward over the past two years, the people said, though they cautioned that the report is not complete. The New York Times has not reviewed the draft, which could contain other significant findings.

On November 27, The Times headlined another article with, “Russia Inquiry Review is Expected to Undercut Trump Claim of F.B.I. Spying.”  However, in early May, The Times reported that the “F.B.I. Sent Investigator Posing as Assistant to Meet with Trump Aide in 2016.”

Emanuel then asked Biggs, “Should folks hold off to read the entire report, sir?” to which Biggs responded, “Absolutely right. I find it interesting that The New York Times got a leaked version – or claims they have a leaked version of it, and they’re already trying to spin it.  This is a normal process from the left is to get something out trying to leak it and spin it and create a narrative before the actual document or hearing takes place.”