Where was the FBI’s “Probable Cause” on Carter Page?

WAS “RIGOR” APPLIED TO THE PROCESS, OR SOMETHING ELSE? 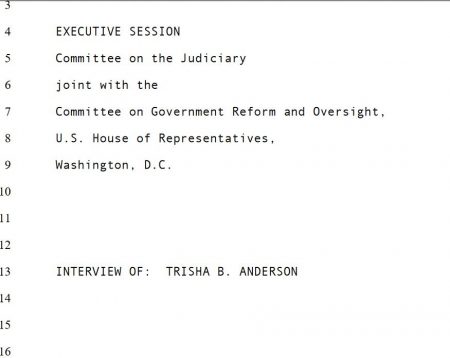 Steele, a former British intelligence agent, provided to the FBI what is now known to be an unverified compilation of information which was submitted to the Foreign Intelligence Surveillance Court (FISC) by the FBI on October 21, 2016 to obtain permission to monitor Page’s communications.

By that time, Page was no longer a Trump advisor.  His interactions with others associated with the campaign were undoubtedly collected, he told investigative reporter Sharyl Attkisson in a March interview.  As the surveillance warrant was renewed on three successive occasions, authorizing data-collection for a full year, any interactions Page had with members of the Trump administration were captured by the U.S. government, he additionally said.

On June 9, Page told “Sunday Morning Futures” host Maria Bartiromo that he has been an unpaid source for the CIA and FBI for “decades,” implying that the United States government would have known that he was not an “agent of a foreign power,” as the warrant application alleged.  The FISA warrants were part of an FBI, and later Special Counsel, investigation into alleged “collusion” between members of the Trump campaign and the Kremlin.

As a result of the allegation, Page said he has received numerous death threats, particularly from the state of Oklahoma, which he believes the FBI has not properly addressed.

In April, Special Counsel Robert Mueller’s report was made public, revealing that after 22 months, the issuing of 2,800 subpoenas and 500 search warrants as well as 500 interviews, insufficient evidence was found to conclude that any member of the campaign, or any American, conspired with Russians in an attempt to affect the 2016 presidential election.

Some have argued that the FISA court was not informed of the dossier’s political origins nor of Steele’s reported determination to see that Donald Trump was not elected U.S. president despite the FBI’s apparent awareness of Steele’s “political motivations.”

At the time of the “Midyear Exam” investigation into Hillary Clinton’s use of a private email server and the opening of the FBI’s counterintelligence probe into the Trump campaign, Anderson was working under then-FBI General Counsel James Baker. Baker is currently under criminal investigation by the office of U.S. Attorney for the District of Connecticut John Durham for allegedly leaking to the media.

On August 31, 2018, Anderson testified to members of the House Judiciary and Oversight & Government Reform Committees that she worked at the Bureau for three years (p. 8) following positions at the Deputy Attorney General’s office and the U.S. Treasury Department.  She is now employed at the mega-law firm of Covington & Burling, LLP in the field of national-security law.

A questioner for the then-Republican majority asked Anderson if she were acquainted with DOJ official Bruce Ohr (pp. 194-195), who testified to members of the same two committees three days earlier.  Ohr revealed that although Steele was discontinued as an FBI source, he continued to meet with Steele about information contained in the dossier, after which Ohr relayed the information to FBI agent Joe Pientka and at times, “another agent.” (p. 45).

Ohr testified that he informed the FBI that the dossier material was “source information” and not necessarily verified (p. 22). For his part, Steele, testified last year in a deposition that he used unverified reports in the dossier.

Anderson testified that evidence presented to the FISA court must be vetted meticulously through the “Woods file” process which she said includes “source checks” and “asset checks” (p. 202).

In a response about her acquaintance with Ohr, Anderson said she knew Ohr, but not through her position at the FBI (pp. 194-195).

On page 88, Anderson said that in “March 2017,” she was out of the office on maternity leave and learned of James Comey’s firing two months later during that time (p. 177).

On page 195, “Mr. Baker” for the Republicans, asked, “Did  your branch get any information that ultimately came from Mr. Ohr that you’re aware of that you were asked to review or assess or do anything with?” to which Anderson responded, “Not contemporaneous with the investigation.”

On the same point on the following page, Anderson clarified:

Anderson said she was one of the FBI/DOJ individuals who reviewed Carter Page’s FISA first warrant application.  Her role, she said, was “administrative” given that “There were very high-level discussions that occurred about the FISA” and that “the FISA essentially had already been well-vetted all the way up to at least the Deputy Director level on our side and through the DAG on the DOJ side” (p. 202).

In regard to when her office acquired the FBI Ohr 302s, Anderson said, “I believe the first time I reviewed them was probably after the House Permanent Select Committee on Intelligence produced its memo on the Carter Page FISAs,” which was February 2, 2018. “I believe there was a reference in that memo to statements that Mr. Steele made to Bruce Ohr that were documented in our 302s,  and that was the first time I received those 302’s and reviewed them,” she added.

In late February 2018, House Intel Democrats released their own memo claiming that the “Nunes memo” was “profoundly misleading.”

On page 197 of the Anderson transcript, the following question and answer on the “302s” is noted:

The Ohr 302s to which Anderson referred could be among an unknown number of documents which on May 23 President Trump authorized Attorney General William Barr to declassify. According to Rep. Mark Meadows on June 9’s “Sunday Morning Futures,” some documents relating to the Russia “collusion” probe which may or may not have required declassification will be released “this week.”

When Baker asked Anderson (p. 200), “Continued to meet with Bruce Ohr to receive information from Christopher Steele after Christopher Steele had been terminated as a confidential human source. Do you have any views on that practice?” she replied: 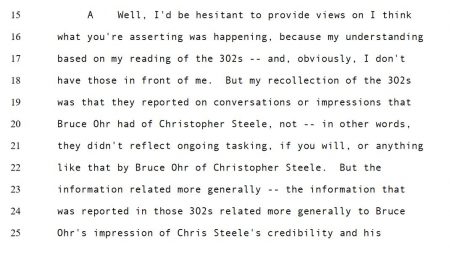 The following page, also numbered “200,” is a duplicate of the previous page.  Shortly after 9:00 AM Monday, The Post & Email contacted the office of Rep. Doug Collins, who several weeks ago released the Anderson transcript along with eight others, to advise of the error.  The staffer who took our call said that he would “relay this information to the Congressman,” after which we thanked him and hung up.

The final word of Anderson’s statement, which appears on what is numbered by the transcriptionist as page “201,” is “motivations.”  On the same page, Anderson said she reviewed the Carter Page FISA application “for the initiation.”

In the following two pages, Anderson is noted to have said that her role in the FISA process was as a “backstop to all of the other processes and the rigor that had been applied by DOJ attorneys and by FBI investigative and legal personnel.”

When questioned directly, Anderson admitted that she did not “read the FISA.”  A “cover note” would have provided background information on the FISA request, Anderson told Baker, and that “In the case of the Carter Page FISA, I was generally familiar with the facts of the application before I signed that cover note.”

On page 205, Anderson said that the “Deputy Director and the Deputy Attorney General on the DOJ side” had approved the FISA application prior to its reaching her desk, a chain of events she described as “unusual.” 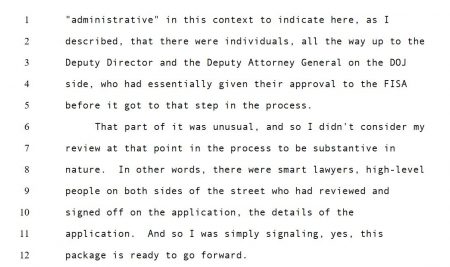 Comparing the Page FISA application to a “regular case,” Anderson said that in approving the application, “It would be with a great degree of deference to the many lawyers who have reviewed that application before me — in other words, to the various layers of review both on the FBI and on the DOJ side that preceded me.”

On the transcribed pages 207 and 208, Anderson is documented as having said, in response to a question about “criminal activity” allegations pertaining to Page, that based on her memory, “I believe that the way we pled Carter Page did involve — was under the aiding-and-abetting prong that does involve a reference to probable cause that he aided and abetted — and I can’t remember the precise statutory formulation, but activity that does involve criminal activity.”

Page was not charged with a crime and told Bartiromo Sunday that he testified to Special Counsel Robert Mueller’s grand jury during the course of the Russia investigation.  When Mueller turned in his report to Attorney General William Barr in March, he said there were no sealed indictments.

Barr has tasked Durham with investigating the origins of the FBI “Russia” probe.