WHAT WILL THE REPORT SAY…OR DO? 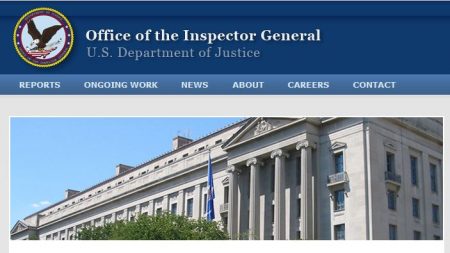 (Nov. 18, 2019) — On Monday evening multiple sources reported that Justice Department Inspector General Michael Horowitz will testify publicly to the Senate Judiciary Committee on December 11, indicating that his long-awaited report on alleged “FISA abuse” stemming form the “Russia collusion” investigation will be released at some point before then.

The reportage was prompted following committee Chairman Lindsey Graham’s announcement of Horowitz’s scheduled appearance.  “The Inspector General will discuss the findings of his investigation into DOJ and FBI’s conduct during the Foreign Intelligence Surveillance Act (FISA) warrant process as it relates to the 2016 presidential election,” the statement reads in part.  “…Mr. Horowitz will be appearing before the Senate Judiciary Committee on December 11, where he will deliver a detailed report of what he found regarding his investigation, along with recommendations as to how to make our judicial and investigative systems better” (emphasis Graham’s).

As he has previously, Fox News’s Sean Hannity predicted Monday night that the report, which has been over a year in the making, will reveal serious deficiencies in the surveillance applications submitted to the Foreign Intelligence Surveillance Court (FISC) for warrants on a former Trump campaign aide, Carter Page, who the FBI monitored for a year.

CNN, however, reported that “What the report says is still unknown. But some witnesses who have been interviewed by the inspector general say they expect that it will likely reveal some missteps, though none that should be interpreted as undermining a legitimate investigation.”

Evidence emanating from the Trump-Russia “collusion” probe, which targeted Trump and members of his campaign for more than two years, has demonstrated that the FBI told the court that the information provided with the warrant applications to justify the surveillance on Page was verified when, in fact, it was not.

Page might have been one of four or more Trump campaign associates who were the subjects of U.S.- and foreign-government surveillance, according to George Papadopoulos, a former Trump campaign aide who says he was a “Deep State Target” while working in the energy sector in Europe in 2015 and 2016.

One of Hannity’s guests Monday night, former chairman of the House Oversight Committee Jason Chaffetz, said the report will likely have been released to the public prior to Horowitz’s testimony, adding that he believes it could number 1,000 pages.

Hannity has said he believes that criminal referrals will result from the inspector general’s investigation into the actions of the FBI and Justice Department during the 2016 presidential-campaign cycle.  According to Hannity, other intelligence agencies such as the CIA and the Office of the Director of National Intelligence (ODNI) under Obama may be implicated in wrongdoing.

That view has been echoed by some Republican congressmen in recent weeks and suggested as the reason that House Democrats are swiftly pressing forward on their “impeachment inquiry” as to whether or not President Trump committed impeachable acts stemming from a July 25 phone call with Ukrainian President Volodymyr Zelenskiy.

Several weeks ago, the Justice Department confirmed that an “administrative review” under way into the origins of the “collusion” probe is now a “criminal” investigation.

The release of the report has been delayed several times since Attorney General William Barr first said in the spring it would be made public in “May or June.”  Last Monday, Hannity reported with confidence that the report’s release date would be November 18, 2019.

Horowitz is an Obama appointee who previously referred former FBI Deputy Director Andrew McCabe for criminal investigation over a year ago for “lack of candor” during interviews with investigators, although the Justice Department has made no announcement of any charges.  McCabe denies any wrongdoing.