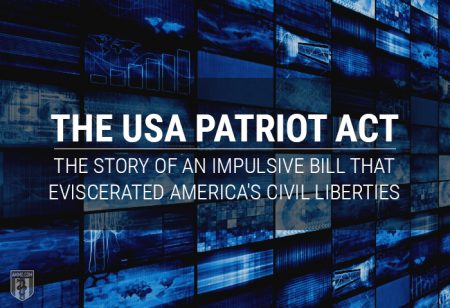 (Nov. 5, 2019) — The USA PATRIOT Act provides a textbook example of how the United States federal government expands its power. An emergency happens, legitimate or otherwise. The media, playing its dutiful role as goad for greater government oversight, demands “something must be done.” Government power is massively expanded, with little regard for whether or not what is being done is efficacious, to say nothing of the overall impact on our nation’s civil liberties.

No goals are posted, because if targets are hit, this would necessitate the ending or scaling back of the program. Instead, the program becomes normalized. There are no questions asked about whether the program is accomplishing what it set out to do. It is now simply a part of American life and there is no going back.

The American public largely accepts the USA PATRIOT Act as a part of civic life as immutable, perhaps even more so than the Bill of Rights. However, this act – passed in the dead of night, with little to no oversight, in a panic after the biggest attack on American soil since Pearl Harbor – is not only novel, it is also fundamentally opposed to virtually every principle on which the United States of America was founded. It might not be going anywhere anytime soon, but patriots, liberty lovers and defenders of Constitutional government should nonetheless familiarize themselves with the onerous provisions of this law, which is nothing short of a full-throttle attack on the American republic.

What’s Even in the USA PATRIOT Act?

What is in the USA PATRIOT Act? In the Michael Moore film Fahrenheit 9/11, then Rep. John Conyers cracked wise about how no one had actually read the Act and how this was in fact par for the course with America’s laws. Thus, before delving into the deeper issues surrounding the PATRIOT Act, it is worth discussing what the Act actually says. Here’s a brief look at the 10 Titles in the PATRIOT Act:

Most of the provisions of the USA PATRIOT Act were set to sunset four years after the bill was passed into law. However, the law was extended first by President George W. Bush and then by President Barack H. Obama. The latter is particularly scandalous given that, at least in part, a rejection of the surveillance culture that permeated the Bush Administration was responsible for the election of Obama in 2008.

Next, it’s important to remember the environment in which the USA PATRIOT Act was passed: Post-9/11. It is not the slightest bit of exaggeration to label the environment in which the PATRIOT Act was passed as “hysterical,” nor is “compliant” a misnomer for the Congress of the time. Opposition to the Act was slim and intensive review of one of the most sweeping Acts of Congress in American history was nonexistent.

All told, Congress took a whopping six weeks drafting, revising, reviewing and passing the PATRIOT Act. That’s less time than Congress typically spends on totally uncontroversial and routine bills that don’t gut the Fourth Amendment. The final vote found only 66 opponents in the House and one (Wisconsin Democrat Russ Feingold) in the Senate. The entire passage of the PATRIOT Act, from start to finish, took place behind closed doors. There were no committee reports or hearings for opponents to testify, nor did anyone bother to read the bill.

“Uniting and Strengthening America by Providing Appropriate Tools Required to Intercept and Obstruct Terrorism” is the bloated and overwrought full name of the bill, crafted by a 23-year-old Congressional staffer named Chris Cylke. This ridiculous name puts the focus not on the surveillance aspects or the erosion of basic civil liberties enshrined in Western society since the Magna Carta, but on patriotism. At the time of its creation, the messaging was very clear: Real patriots support massive intrusions on civil rights. As President George W. Bush said at the time, “Either you are with us, or you are with the terrorists.” This sentiment very much seemed to apply to American citizens.

While the argument that if you have nothing to hide you shouldn’t fear investigation is anathema in a Constitutional republic with regard to citizens, it should be standard operating procedure when it comes to our organs of government. If we cannot expect transparency from the United States Congress – elected officials charged with representing the will of the people and protecting the Constitution – then we certainly can’t expect it anywhere else.

The USA PATRIOT Act: The Story of an Impulsive Bill that Eviscerated America’s Civil Liberties added on Tuesday, November 5, 2019

2 Responses to "The USA PATRIOT Act: The Story of an Impulsive Bill that Eviscerated America’s Civil Liberties"