IS “IMPEACHMENT” REALLY A COVER-UP? 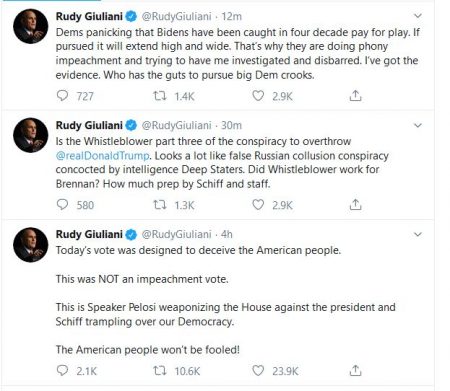 Earlier this month, Giuliani made eye-opening allegations that Biden and his son, Hunter, have profited handsomely from the elder Biden’s positions in the U.S. government.  Prior to serving as Barack Obama’s second-in-command for eight years, Biden was a U.S. senator representing Delaware from January 1973 to January 2009.

Hunter Biden reported received a monthly salary of $50,000 while he sat on the Board of Directors of Bursima Holdings, a Ukrainian energy company, while his father was vice president and Obama’s designated U.S.-Ukraine liaison.

After making the explosive allegations on “Hannity,” Giuliani was accused of conducting “shadow” foreign policy outside of authorized State Department channels and pressuring Ukraine, which has long been fraught with corruption, to investigate Trump’s political enemies.

On Thursday evening, CNN suggested that Giuliani is under criminal investigation, following the indictment and arrest of two “associates” on October 9.  The two, who were arrested the same day Giuliani made the explosive allegations on “Hannity” against the Bidens, “had introduced him to former and current Ukrainian officials as he searched for what he has said is damaging information connected to Trump’s political rival, Democratic presidential contender Joe Biden,” according to CNN.

Biden himself boasted early last year at a Council on Foreign Relations (CFR) forum that he was responsible for the termination of then-Ukrainian prosecutor Viktor Shokin, who was reportedly investigating Burisma and possibly the Biden connection.

Giuliani interviewed Shokin, he also reported on “Hannity” on October 2.

Over the last two weeks, Giuliani has been relatively quiet, but on Thursday he issued several tweets on the subject.  His latest tweet in the series Thursday evening claimed that the “Bidens have been caught in four decade pay for play.  If pursued it will extend high and wide.  That’s why they are doing phony impeachment and trying to have me investigated and disbarred.  I’ve got the evidence…”

Republicans believe the House of Representatives’ “impeachment inquiry” is unfair, unwarranted, and improperly constituted, while Democrats insist that they have a constitutional duty to investigate whether or not Trump committed an impeachable offense when he asked the Ukrainian president, Volodymyr Zelenskiy, to “do him a favor” and look into the Burisma-Biden matter for any possible criminal or improper activity.

The inquiry was set off by a “whistleblower” complaint which claimed, based on second-hand information, that Trump had unduly pressured Zelenskiy during the July 25 phone call specifically to hurt Biden’s 2020 presidential campaign.

Some reports say that the whistleblower is a Democrat with ties to Biden from the Obama years and an anti-Trump animus.

On Thursday morning, the House held a vote to approve or disapprove a resolution to continue the “inquiry” among six committees, which will then report their findings to the Judiciary Committee, whose responsibility it would be to draft Articles of Impeachment if its members believed it to be warranted.

The resolution was approved 232-196, with two Democrats joining the Republicans in opposing it and an Independent voting with the Democrats.

The Trump administration has accused House Intelligence Committee Chairman Adam Schiff of assisting the whistleblower to write his five-page complaint.  Initially, Schiff said he had not met the individual but later admitted, after The New York Times reported it on October 2, that members of his staff had communicated with him or her prior to the complaint becoming public.

“Is the Whistleblower part three of the conspiracy to overthrow@realDonaldTrump. Looks a lot like false Russian collusion conspiracy concocted by intelligence Deep Staters. Did Whistleblower work for Brennan? How much prep by Schiff and staff,” Giuliani’s second tweet reads.

Giuliani was referring to the 22-month investigation carried out by Special Counsel Robert Mueller’s team of 19 prosecutors, assisted by dozens of FBI agents, to determine whether or not Trump or any of his campaign aides “colluded” with the Kremlin to affect the outcome of the 2016 election.  Ultimately, the team’s report stated that insufficient evidence existed of a conspiracy between any American and Russians and reached no conclusion as to a second allegation of “obstruction of justice.”

Following the issuance of the report, Democrats said they believed Trump obstructed justice and had possibly committed financial and other crimes both before and after he entered the White House.  They have since subpoenaed financial records and tax returns as well as former White House aides and advisers, many of whom have refused to appear.

Some Republicans, Trump supporters, and even several mainstream media outlets have referred to the “Deep State” as responsible for attempting to foil Trump’s candidacy and later, presidency.  At present, Attorney General William Barr and U.S. Attorney for the District of Connecticut are investigating the origins of the Trump-Russia “collusion” narrative given that the allegations proved false and that indications exist that foreign intelligence services were enlisted to collect information on unassuming Trump campaign aides which was later used against them.

“Brennan” is Obama CIA Director John Brennan, whose name has been mentioned by investigative journalist Sara A. Carter as an individual Barr and Durham wish to interview in regard to the Russia investigation.

Brennan’s name has also been invoked in connection with another investigation which the mainstream media has refused to report:  that of the “long-f0rm” birth certificate image posted at whitehouse.gov in 2011 found by a criminal investigation to be a “computer-generated forgery.”

Beginning Giuliani’s string of tweets was, “Today’s vote was designed to deceive the American people. This was NOT an impeachment vote. This is Speaker Pelosi weaponizing the House against the president and Schiff trampling over our Democracy. The American people won’t be fooled!”

3 Responses to "Giuliani: Bidens “Caught” in Decades-Long “Pay for Play”"