Claims are One Thing, but Evidence is Another

WHO IS A “WHISTLEBLOWER?” 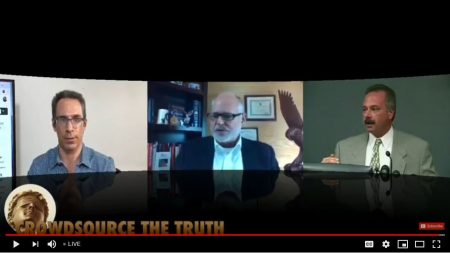 (Oct. 31, 2019) — On Thursday evening, The Post & Email’s editor appeared with Obama birth-certificate lead investigator Mike Zullo and former CIA agent Kevin Shipp with host Jason Goodman of “Crowdsource the Truth” show to further discuss the claims of former NSA/CIA contractor Dennis Montgomery and others of a secret surveillance apparatus known as “The Hammer” (HAMR) which was allegedly used to spy on Donald Trump and other prominent governmental and non-governmental figures.

The broadcast is an official production of “The Intelligence Assessment” hosted by Shipp on Thursday evenings at 7:00 p.m. ET.

Shipp produces additional videos on the Patreon platform and is a frequent guest on Goodman’s broadcasts.  Shipp’s stated mission is to “expose the Deep State/Shadow Government.”  He is author of “From the Company of Shadows” and recently has appeared on the Fox News Channel discussing the intelligence-community “whistleblower” who launched the House of Representatives’ “impeachment inquiry” of President Trump.

On Thursday Zullo recounted his oversight of Montgomery’s work as a confidential informant for the Maricopa County Sheriff’s Office (MCSO) in 2014 and his consultation with former NSA directors J. Kirk Wiebe, William Binney and Thomas Drake to obtain a disposition as to the data contained on approximately four dozen hard drives Montgomery produced.  At the time, Wiebe and Drake signed a report stating that based on their assessment of the drives, Montgomery was found to be “a complete and total FRAUD.”

In recent interviews with Dr. Dave Janda, Wiebe and Binney have thrown their full support behind Montgomery’s claims of widespread government surveillance of American citizens based on what they claim was a single phone call on October 23, 2019, the day before their most recent interview with Janda. In on-the-record emails exchanged with this writer in late June, however, Wiebe stated that he stood by the November 14, 2014 assessment of the hard-drive data provided by Montgomery.

Janda’s interviews with Wiebe and Binney have not divulged Montgomery’s history with the MCSO nor Wiebe, Drake and Binney’s 2014 report.  This writer’s suggestions to Janda to host Zullo in order to present a fuller picture of Montgomery’s background were not acted upon.

According to court documents, Zullo’s account, the November 14, 2014 report and a number of mainstream reports dating back to 2010, Montgomery did not provide proof of the government surveillance he claimed took place and of which he claims render him a “whistleblower.”

Claims are One Thing, but Evidence is Another added on Thursday, October 31, 2019

5 Responses to "Claims are One Thing, but Evidence is Another"