FORMER UKRAINIAN PROSECUTOR “SCARED OUT OF HIS MIND” 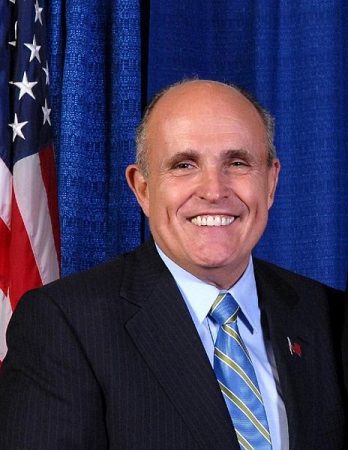 (Oct. 2, 2019) — In an on-air interview Wednesday night on “Hannity,” former New York City mayor and current President Trump attorney said that information he provided to the State Department concerning former putative Vice President Joseph Biden’s involvement in having a Ukrainian prosecutor fired in 2016 is now under investigation by the FBI.

Giuliani interviewed the former prosecutor, Viktor Shokin, last fall, he said.  In a sworn affidavit posted by The Hill‘s John Solomon, Shokin wrote that he was pressured to resign his position by then-Ukrainian President Petro Poroschenko as a result of Biden’s insistence.

Joe Biden has publicly boasted about having pressured Poroschenko to dismiss Shokin, who had launched an investigation into Burisma Holdings, an energy company which paid Biden’s son Hunter $50,000 a month to sit on its board of directors.

“I have six witnesses who can give direct admissible evidence,” Giuliani told Hannity at 9:37 p.m. EDT.  In a closing vehement statement, he said that the elder Biden’s corruption in Ukraine and China, which reportedly gave Hunter $1.5 billion as a result, must be exposed for the good of the U.S.

Giuliani said that he could not have asked the FBI to look at his evidence when he first received it because of corruption within the agency.  He additionally reported that one of George Soros’s companies was involved.

After providing the documentation to the State Department, Giuliani said, he “saw no evidence” that the agency was investigating.  However, he added, “It’s been turned over now to the FBI.”

Giuliani said that Shokin is willing to testify in the U.S. as to his claims, although he said Shokin is “hiding and scared out of his mind that they’re going to kill him.”

In addition to Giuliani’s research into Shokin’s claims, he said that Joe Biden did not come under scrutiny because he is a 2020 presidential candidate, but rather, because he was a corrupt vice president who disgraced the United States.  Obama assigned Biden to represent the U.S. in diplomacy with Ukraine, after which Hunter Biden was hired to the Burisma Board of Directors and Shokin was fired.

At 9:43 p.m., Solomon appeared on “Hannity” and said that the Ukrainian embassy in the U.S. confirmed to him that a “DNC contractor” asked Ukrainian operatives to produce derogatory information about the 2016 Trump campaign and its short-term manager, Paul Manafort, who is now serving an 8+-year prison sentence.

Democrats in Congress now claim that Trump pressured Ukrainian president Voloymyr Zelenskiy for a quid pro quo in a July telephone conversation and have ramped up an “impeachment inquiry” on that basis.  Trump claims that House Intelligence Committee Chairman Adam Schiff had advance knowledge of the “whistleblower” complaint which became the catalyst for the renewed impeachment focus.

At a press conference Wednesday afternoon as well as remarks made from the Oval Office, Trump suggested that Schiff should resign from Congress or come under close scrutiny for his role in advancing the “whistleblower” grievances, which the intelligence-community employee admitted came from second-hand information.

Trump has called the alleged whistleblower “a spy” and the efforts to remove him from office “a coup.”

Both Giuliani and Trump mentioned the possibility of legal action against those promoting the Ukraine “quid pro quo” narrative as well as the now-closed Russia “collusion” investigation which hung over the Trump administration for more than two years.

In another new development Wednesday, a number of Solomon’s emails were provided to the Senate Intelligence Committee by State Department Inspector General Steve Linick in what was described as an “urgent” closed-door meeting.  Solomon commented on the revelation (in reverse chronological order): 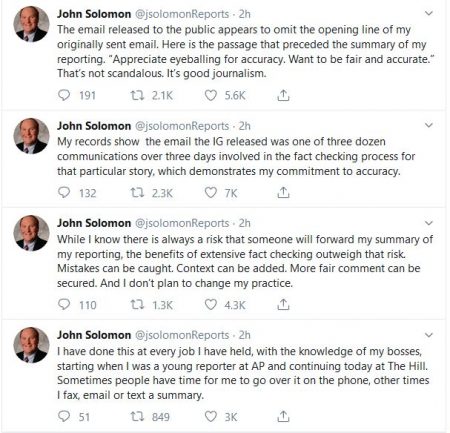