(Oct. 4, 2019) — On August 16, 2019, The Post & Email’s editor received a certified letter from the Washington State Department of Social and Health Services informing her that she was the subject of a complaint of “mental abuse” of a “vulnerable adult.”

The editor has never lived in nor visited Washington State and has no relationship with anyone there.  After reflecting briefly on how the accusation could possibly have arisen, she contacted by email and phone the social worker whose name was provided on the letter and enclosure advising of the “serious” nature of the complaint, which we learned was filed with the agency on July 13, 2019.

The social worker was unavailable on that day, but the editor left a voice message acknowledging receipt of the letter as well as stating her strong suspicion of the identity of the complainant.

The letter we received in August reads, with redactions of personal and social-worker contact information: 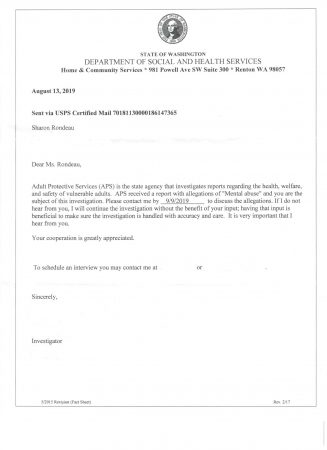 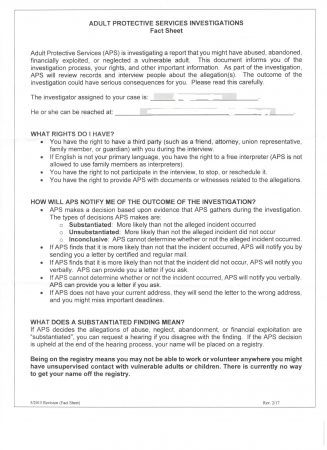 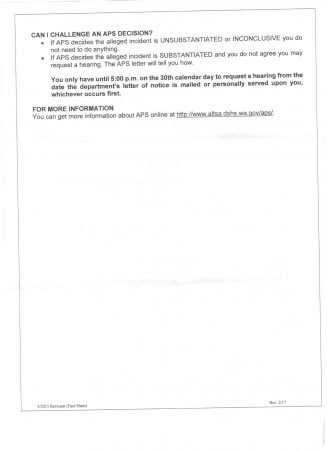 In response to our initial email and phone call, the social worker asked the editor if she would be willing to answer some questions regarding the complaint, to which we agreed.  In accordance with state law and agency policy, she could not and did not reveal the complainant’s name.

Shortly after receiving notification of the complaint, the editor went forward on the premise that former NSA and CIA contractor Dennis Montgomery was the only individual who could have filed it, perhaps spurred by The Post & Email’s articles as to his history with the Maricopa County Sheriff’s Office (MCSO) in 2013 and 2014 and specifically, with Mike Zullo, who supervised Montgomery’s work as an MCSO confidential informant during that time.

Beginning in late October last year, Montgomery began sending the editor frequent emails in an attempt to gain our interest in writing about his claims of government surveillance of both public and private individuals, including what he said were The New York Times reporters.  In the emails, Montgomery made it clear that he wished to disassociate himself from the MCSO investigation in which he was a central figure and specifically asked why the editor would not be willing to produce a “positive” article about him.

While the editor never refused to publish an article about Montgomery, she also never committed to doing so.  In response to the 45 emails Montgomery sent between late October 2018 and mid-June of this year, the editor neither denigrated nor insulted the sender in any way.

When the editor left the voice message for the social worker, she stated that she believed the complainant to be a disgruntled reader of her publication, The Post & Email, as the editor had felt compelled to correct erroneous reporting by others which also omitted crucial facts about the reader’s background which came to our attention in late June.

Montgomery never contacted the editor to object to any of the assertions in her articles, nor did he ever claim that we were “abusive” toward him.

The editor’s August 16 email to the social worker reads:

I am in receipt of the above-captioned letter. I am owner/editor of The Post & Email, an online publication which reports on corruption in government. I have never lived in nor visited Washington State but have a very good idea that a disgruntled and highly litigious reader filed this bogus complaint against me.

I will agree to a phone interview only if you consent to my recording the conversation. I can tell you that the complainant is wasting your time and resources, as he has of so many other individuals and entities over many years, including former New York Times writer James Risen in a federal lawsuit which he lost, including on appeal.  The complainant lodged false claims against former Nevada Gov. Jim Gibbons of which the FBI cleared Gibbons, and he filed a false Internal Affairs investigation against an investigator who worked with the complainant five years ago and on which I have recently been reporting.

If the complainant considers himself a “vulnerable adult,” then he does not have to read my accurate and thoroughly-sourced articles based on court documents and mainstream reporters’ investigations.

On September 2, the editor sent additional information with links to applicable articles and reports published at both The Post & Email and elsewhere, part of which reads:

I never agreed to interview Mr. Montgomery, and he is trying to silence both me and Mr. Zullo, who supervised his work for the Maricopa County Sheriff’s Office in 2014 and monitored him for another year, only to find that his claims of having highly-classified information about government surveillance, which he was paid to substantiate, were unfounded.  Other experts agreed:
https://www.scribd.com/document/289508561/PX-2531-2013-11-13-Drake-Wiebe-Letter-Re-Montgomery-Hard-Drives
An FBI interview of Montgomery’s former business partner indicates that numerous coworkers reported a myriad of complaints about him, among them dishonesty:
https://www.scribd.com/document/275559455/DM-FBI-Search-70-Gov-Docs-Unsealed-D-nev-3-06-Cv-00263
I have been fair in my reporting and reported Mr. Zullo’s finding that some of Montgomery’s information was “verifiable”:
https://www.thepostemail.com/2019/06/20/exclusive-montgomerys-hard-drives-not-sole-data-given-to-zullo/
I do not understand how, without any direct contact with Montgomery or anyone else in Washington State, I could be credibly accused of any type of “abuse.”  Is the State of Washington contending that a journalist does not have a First Amendment right to accurately report the news?

On September 5, 2019, the agency determined the allegation to be “unsubstantiated.”  The document containing the disposition of the case is marked “confidential” and therefore is not reproduced here.

The editor never received notification of the decision through the U.S. mail.  In a follow-up inquiry as to the status of the case on October 1, the worker informed the editor of the case’s closure in early September.  Having failed to receive the letter the worker said was mailed, on October 3 we requested a copy by email, which was sent to the editor within minutes.

According to Revised Code of Washington (RCW) 74.34.053 dealing with “vulnerable adults”:

(1) A person who is required to make a report under this chapter and who knowingly fails to make the report is guilty of a gross misdemeanor.
(2) A person who intentionally, maliciously, or in bad faith makes a false report of alleged abandonment, abuse, financial exploitation, or neglect of a vulnerable adult is guilty of a misdemeanor. (Emphasis The Post & Email’s)

The editor is in the process of reporting the “bad faith” report filed against her to Washington State authorities.

Montgomery has a long history of filing retaliatory, fictitious complaints.  In 2016, Montgomery filed a complaint with the MCSO alleging that Zullo had threatened him in a text-message exchange which triggered an Internal Affairs investigation.  The text message did not support Mongomery’s accusation​. No disciplinary action was ultimately taken against Zullo. In addition to that unfounded complaint, in 2007 Montgomery alleged that then-Nevada Gov. Jim Gibbons had accepted a bribe from Montgomery’s former business partner, Warren Trepp, which initiated an FBI investigation concluding in no criminal charge against Gibbons.

The editor has come to believe that over a 30+-year history of litigation both as plaintiff and defendant, Montgomery has attempted to quash any information he believes damages his self-inflicted credibility problem by using the system or outright lying about people that he views are opposed to him even though his lengthy legal history supports his lack of credibility.